Greetings from the land recently pummeled by the 'beast from the east'. For those of you who aren't resident in the UK this basically means that we had cold temperatures and snow that came from Siberia. Having grown up in the snow belt of southwestern Ontario (Canada) these mere few flakes that turned into about a whopping 2 inches was nothing so dramatic to require things to grind to a halt. Alas the British aren't used to enough snow to make a half decent snow ball or pipe freezing temperatures, so it was a bit of a shock.

The weather did make me want to stay wrapped up near the radiator and read a good book. This week I decided to listen to a good book instead. I had some Audible vouchers so decided to buy the first 3 books of Ilona Andrews' Innkeeper Chronicles. I have included the cover of image for the hardcover book because You know I am a cover snob right? Well this one is perfect. This series has some awesome images throughout and this one is a 10/10 in my view. I was a little hesitant about the audio version of this book as I find it hard to like the narrator of a book I have already read. Paint me fickle! It took me a while and I have to say that it wasn't until book 2 - Sweep in Peace that I got used to Renee Raudman's version of Dina Demille. I love this series and I quite liked the audio version as well. I have reviewed these books before (some have been in my fave books of the year) so I am not going to review them again. What I can tell you is how much I am enjoying the spin off version starring two of secondary characters - Maud and Arland which is released late on a Friday (UK time). In this new serial - Sweep of the Blade Maud has decided to join Arland on his home planet while his family host the wedding of 2 previously warring houses. Only a few chapters in and it has made my Saturday mornings (I read it first thing with a cup of tea).

I did learn something new from reading Sweep of the Blade. Can you believe that Ilona Andrews has taught me (and all my friends that I tell) that I have named my cats the same name? I discovered that Maud, Dina's sister and the name of my oldest cat is a nickname for Matilda (the name of my other cat). I haven't told them yet. They don't like each other enough as it is! So there you go...your fun fact for this week. Enough of fun facts. What have I read?

It's all over! Yes, one of my fave series - The Ministry of Peculiar Occurrences is finished with it's final instalment Operation: Endgame. With the Maestro gone you would easily assume that Wellington Books and his fellow agent Eliza Braun would be able to have a break from the madness that had befallen them in the form of the House of Usher. Now its Dr. Henry Jekyll that has left a trail of carefully staged victims for Books and Braun to follow. While the duo search for Jekyll their Australian and Canadian counterparts - Bruce Campbell and Brandon Hill - are hot on the trail of the House of Usher and their nefarious plan: Operation: Ragnorok. Time is not on their side. The Ministry could be the only thing between peace and utter and complete chaos. Who will prevail? Time will tell... and you reading Operation: Endgame for yourself!

Seven years ago I first met my fictional boyfriend and favourite archivist Wellington Books...oh yeah...and his derring do companion Eliza Braun. It has been a whirlwind journey with this pair and their adventures both mysterious and peculiar. On the whole I have thoroughly enjoyed this series. Apart from book 4 I have loved the characters, their adventures and the steampunky version of England that they live in. Operation: Endgame is a book in 2 parts - certain chapters star Wellington and Eliza while other chapters follow Bruce and Brandon. This does make for a slightly disjointed read but gives us two separate stories in one. I liked this final instalment rather than loved it. I thought the ending was a tiny bit of a let down and wasn't really clear what the glamorous assassin Sophie Del La Morte was up to. Well done to Ballantine and Morris for continuing the series funding through a Kickstarter when we could have easily been left hanging. As much as I love these characters I am happy to say good-bye. Rather go while the story is still fresh rather than dragging it out. Missing you already Welly!


That's it for me this week. I hope you haven't let February get you down and had a great book, or two, to read. Until next week Happy Reading. 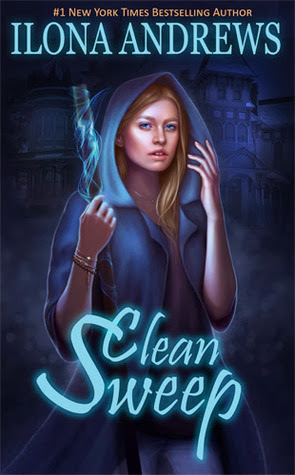 On the outside, Dina Demille is the epitome of normal. She runs a quaint Victorian Bed and Breakfast in a small Texas town, owns a Shih Tzu named Beast, and is a perfect neighbor, whose biggest problem should be what to serve her guests for breakfast. But Dina is...different: Her broom is a deadly weapon; her Inn is magic and thinks for itself. Meant to be a lodging for otherworldly visitors, the only permanent guest is a retired Galactic aristocrat who can’t leave the grounds because she’s responsible for the deaths of millions and someone might shoot her on sight. Under the circumstances, "normal" is a bit of a stretch for Dina. 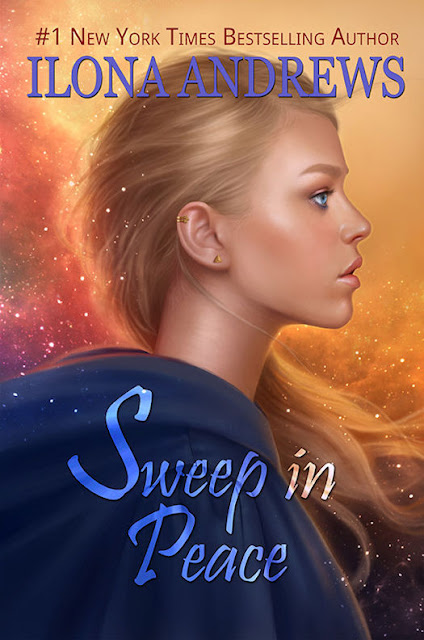 Dina DeMille doesn’t run your typical Bed and Breakfast. Her inn defies laws of physics, her fluffy dog is secretly a monster, and the only paying guest is a former Galactic tyrant with a price on her head. But the inn needs guests to thrive, and guests have been scarce, so when an Arbitrator shows up at Dina's door and asks her to host a peace summit between three warring species, she jumps on the chance.

Unfortunately, for Dina, keeping the peace between Space Vampires, the Hope-Crushing Horde, and the devious Merchants of Baha-char is much easier said than done. On top of keeping her guests from murdering each other, she must find a chef, remodel the inn...and risk everything, even her life, to save the man she might fall in love with. But then it's all in the day's work for an Innkeeper… 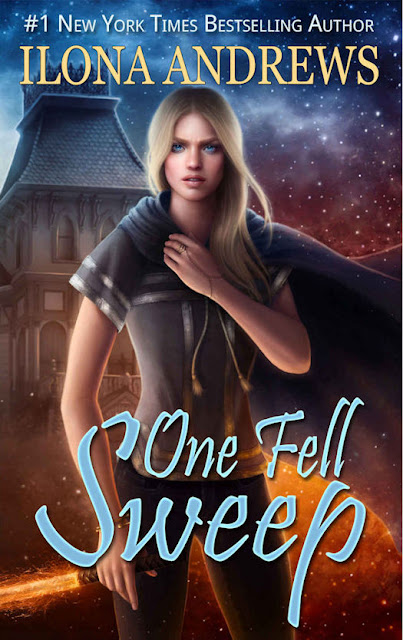 DeMille may run the nicest Bed and Breakfast in Red Deer, Texas, but she caters to very particular kind of guest… the kind that no one on Earth is supposed to know about. Guests like a former intergalactic tyrant with an impressive bounty on her head, the Lord Marshal of a powerful vampire clan, and a displaced-and-superhot werewolf; so don’t stand too close, or you may be collateral damage.

But what passes for Dina’s normal life is about to be thrown into chaos. First, she must rescue her long-distant older sister, Maud, who’s been exiled with her family to a planet that functions as the most lawless penal colony since Botany Bay. Then she agrees to help a guest whose last chance at saving his civilization could bring death and disaster to all Dina holds dear. Now Gertrude Hunt is under siege by a clan of assassins. To keep her guests safe and to find her missing parents, Dina will risk everything, even if she has and may have to pay the ultimate price. Though Sean may have something to say about that.

Note:  the Hardcover edition of the Innkeeper Chronicles is out of print.
Read Sweep of the Blade at Ilona Andrew's blog - here 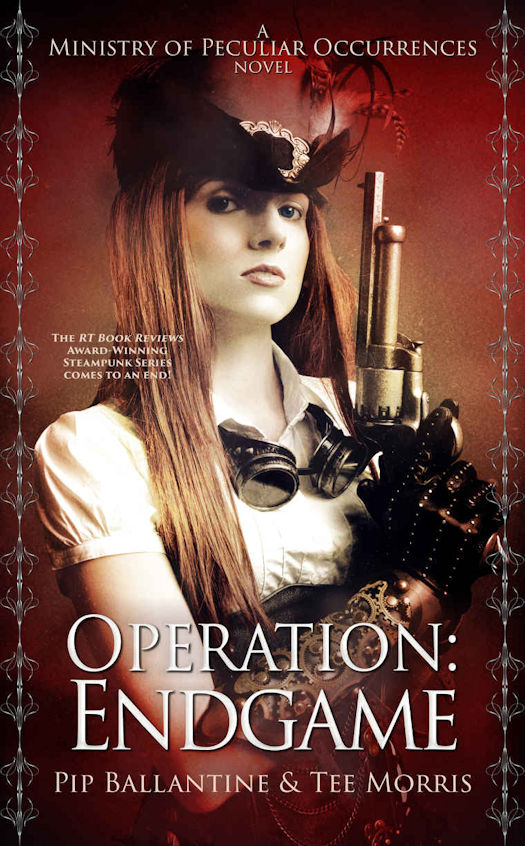 There is no time to rest for Eliza D Braun and Wellington Thornhill Books. The man who has haunted and hounded them since the fall of the Maestro—Doctor Henry Jekyll—is now on a killing spree, using bizarre, theatrical murders as a way to taunt their inability to capture him.

Of course, Books and Braun know this is a trap, so it falls on the Ministry's Finest to turn the tables on Jekyll and bring him to justice.

As Wellington and Eliza pursue both man and monster, the House of Usher continue to push forward with Operation: Ragnarök. Agents Bruce Campbell and Brandon D Hill undertake the challenge of stopping the dark society in their tracks, unraveling a mystery that could plunge the world into chaos, despair, and a noticeable lack of Devon Cream Teas.

The Ministry will not let this stand.