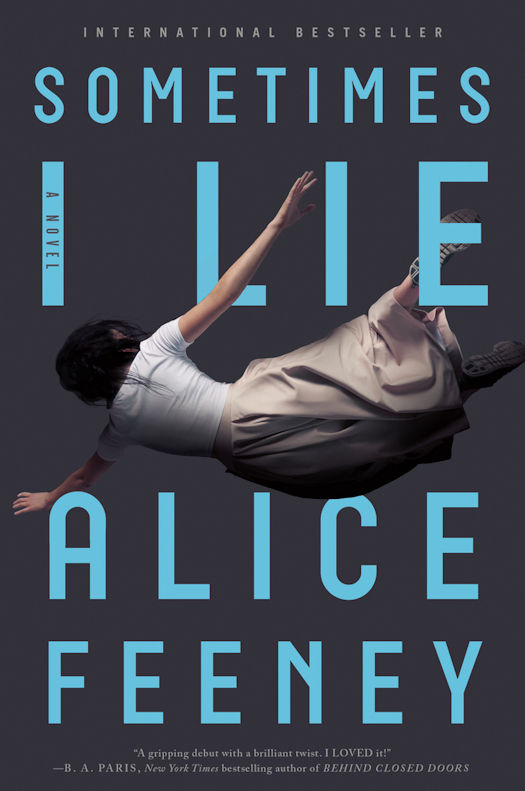 "Boldly plotted, tightly knotted—a provocative true-or-false thriller that deepens and darkens to its ink-black finale. Marvelous.” —AJ Finn, author of The Woman in the Window

My name is Amber Reynolds. There are three things you should know about me:
1. I’m in a coma.
2. My husband doesn’t love me anymore.
3. Sometimes I lie.

Amber wakes up in a hospital. She can’t move. She can’t speak. She can’t open her eyes. She can hear everyone around her, but they have no idea. Amber doesn’t remember what happened, but she has a suspicion her husband had something to do with it. Alternating between her paralyzed present, the week before her accident, and a series of childhood diaries from twenty years ago, this brilliant psychological thriller asks: Is something really a lie if you believe it's the truth?

Sometimes I Lie is the aptly titled psychological thriller debut by Alice Feeney. Told from a first person point of view, protagonist Amber Reynolds admits from the first page that she’s an unreliable narrator:


My name is Amber Reynolds. There are three things you should know about me:
1. I’m in a coma.
2. My husband doesn’t love me anymore.
3. Sometimes I lie.

This story is a dark-house ride where every blind turn sends the reader in dizzying circles where the tableaux are often breathtakingly unexpected and confusing. This review will be short because this is a tale best consumed in the dark.

We get to know Amber through her gauzy consciousness while in a coma after an unremembered accident; through tense flashbacks with her husband, sister, and co-workers prior to the accident; and through stories told in decades old journals from the perspective of a ten year old girl living in perpetual distress. Each new piece of Amber’s puzzle comes together to form an unsettling portrait of a woman in deepening crisis.

Feeney does a fantastic job of manipulating emotions, clues, and alternate meanings. Books built on plot twists can often leave a reader feeling abused by writers who jerk around facts to manufacture surprises, but Feeney relies on skilled misdirection, not cheap trickery, to stun and amaze.

As a protagonist, Amber is both fascinating and infuriating. In fact, it’s difficult to build up a lot of empathy for anyone in this cast of characters. This might be a death knell for some books, but in Sometimes I Lie, it’s just part of the delicious inability to know if anyone is being portrayed honestly through the filter of Amber’s coma and wracked memories.

I would definitely recommend Sometimes I Lie to folks who enjoy psychological thrillers and unreliable narrator stories. There isn’t a lot of gore, but it’s intense storytelling and you should certainly expect some unpleasantness.

There are three things you should know about this review:

1. I thoroughly enjoyed this book.
2. I was upended by the plot twists.
3. I can’t stand liars . . . unless they’re fictional characters with a very cool story to tell.
Posted by Qwill at 5:40 AM