Please welcome Sean Grigsby to The Qwillery as part of the 2018 Debut Author Challenge Interviews. Smoke Eaters was published on March 6th by Angry Robot. 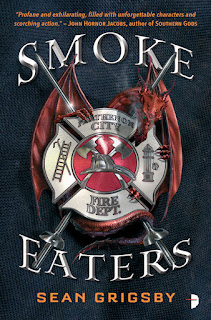 Sean:  I rewrote a children's book we were reading in 3rd grade, where I killed off the main character. But because it was a parody and both my mother and teacher were appalled, I'll tell you about another. In 7th grade, I wrote a story called 3D Madness about three kids who find a video game that sucks them up and plants them in a prehistoric world where they have to defeat a Tyrannosaurus Rex. It was published by the school paper, and I had ideas for other levels of the game, like a Transylvanian monster mash-up level, where the kids have to battle Wolfman and Dracula and maybe even a mummy. It could have been a first novel, but it never came to be. Thankfully, in adulthood, I finish everything I start.

Sean:  I'm a total panster, but I tend to keep the progression of the book in my head, many times thinking about my work-in-progress when I should be paying attention to what's going on in the real world. (Sorry, coworkers, wife, kids, general populace.) I will also pull up a sticky note on the laptop, sometimes, and type out what I want to do in the scene I'll be writing that day.

Sean:  NOT feeling guilty for not writing. While it would be awesome to write every day, things come up. And I'm still averaging two books a year, so I can't be too hard on myself.

Sean:  Everything, but I've always loved 80s movies, especially horror and SFF. But I also like examining society, both where we are now and what shenanigans we'll get ourselves into in the future.

Sean:  Firefighters vs. dragons in the future.

TQ:  Tell us something about Smoke Eaters that is not found in the book description.

Sean:  In the book, anyone killed by a dragon leaves behind a ghost, called a wraith. These specters attract more dragons and fiercely protect the dragon's new, ashen territory. There are also robots.

TQ:  What inspired you to write Smoke Eaters? What appeals to you about writing Fantasy? How many dragons have you fought?

Sean:  I was sitting in my new fire department's academy. Having already been through an academy once, I was bored and began thinking about a book where firefighters had to respond to dragons burning down houses. I love writing the extraordinary, be it science fiction or fantasy. With Smoke Eaters, I wanted to mix the two genres together. You could probably say the theme of the book is old meets new. Cole Brannigan and the dragons representing old, the smoke eaters and all the advanced technology being the new. I love SFF because you can do anything. As far as dragons ... I've honestly lost count.

TQ:  What sort of research did you do for Smoke Eaters?

Sean:  Being a professional firefighter definitely made it easier than some of my other books, but I did research dragons from mythology and lore. At my agent's suggestion, I studied cicadas and tied that in to how the dragons behave.

TQ:  Please tell us about the cover for Smoke Eaters.

Sean:  I have to thank Marc Gascoigne and Lee Gibbons for the cover. Marc came up with the idea, and Lee made it real. The shield the dragon is clinging to is called a Maltese cross. It's been associated with firefighters since forever. Malta was the home to the Knights of St. John who battled in the Crusades against an enemy that threw, basically, old school Molotov cocktails. The Knights of St. John fought through the flames, and I guess it just trickled down from there. The red dragon, breathing smoke, is awesome, but the cover doesn't depict any particular scene. The idea was to make it more symbolic.

TQ:  In Smoke Eaters who was the easiest character to write and why? The hardest and why?

Sean:  Brannigan was definitely the easiest to write. His voice came very naturally to me. (Not sure what that says.) The other characters weren't hard to write, but I paid special attention to how I presented Cheryl, a teenage, Canadian corporate board member, and Sherry, Brannigan's wife. With great help from my editor, Phil Jourdan, I fleshed out their characters well, I think.

Sean:  Smoke Eaters talks about corrupt governments, corrupt corporations, and how they react to a disaster. I also examine religion and how people turn to it in dark times, machines taking jobs, gentrification, and how we'll someday be vaping colorful, glowing bubbles.

Why? Why not? All SFF tackles issues in some form or fashion. I saw the types of issues that would come up in Brannigan's world and wrote them down. But that doesn't mean it's not also entertaining and badass.

TQ:  Which question about Smoke Eaters do you wish someone would ask? Ask it and answer it!

Sean:  How many books did you write before you got a book deal?

Five. It's great that some folks can hit a home run with their first manuscript, but the vast majority of us have to work hard and never give up.

TQ:  Give us one or two of your favorite non-spoilery quotes from Smoke Eaters.

"You never forget the smell of burning flesh, no matter how long you live."


"When I first got on the job, I had a captain who once told me, “If you’re going to eat a shit sandwich, you might as well swallow it in one bite.”
Well, I was in the middle of a super-sized quarter pounder of shit, and the only way I saw out of my predicament was to do what they’d trained us to never do, under any circumstances."

Sean:  Daughters of Forgotten Light is about all-women motorcycle gangs in space, and there's a chance you might see it someday. 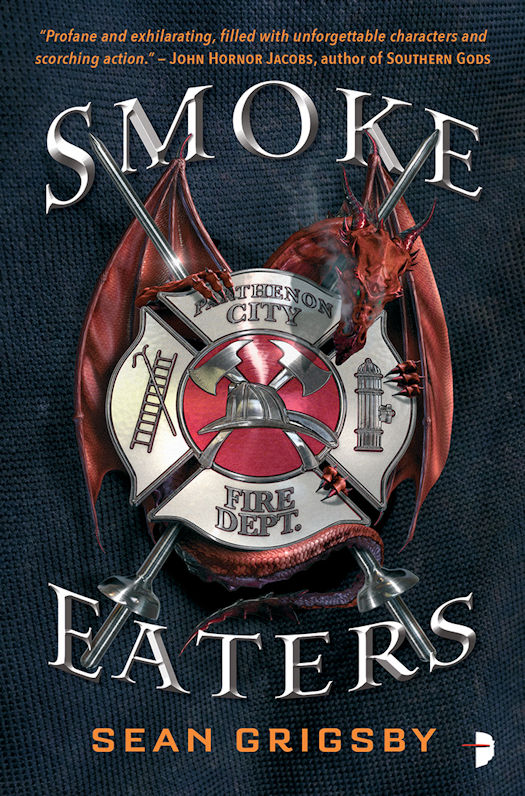 When dragons rise from the earth, firefighters are humanity’s last line of defence, in this wild near-future fantasy.

Firefighter Cole Brannigan is on the verge of retirement after 30 years on the job, and a decade fighting dragons. But during his final fire call, he discovers he’s immune to dragon smoke. It’s such a rare power that he’s immediately conscripted into the elite dragon-fighting force known as the Smoke Eaters. Retirement cancelled, Brannigan is re-assigned as a lowly rookie, chafing under his superiors. So when he discovers a plot to take over the city’s government, he takes matters into his own hands. With hundreds of innocent civilians in the crosshairs, it’s up to Brannigan and his fellow Smoke Eaters to repel the dragon menace. 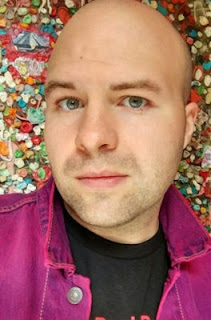 Sean Grigsby is a professional firefighter in central Arkansas, where he writes about lasers, aliens, and guitar battles with the Devil when he’s not fighting dragons.