READERS WILL SINK THEIR TEETH
INTO DARK FANG, VOL. 1 THIS MAY
Collecting issues #1-5

Valla has a vested interest in the survival of humankind. After all, humans are her primary food source.

When the ocean-dwelling vampire finds her aquatic paradise destroyed by a dark liquid plague, Valla takes to the surface in search of answers. What she finds is a world on the brink of ecological disaster, and a civilization powerless to stop it. If Valla wants to keep eating, she’ll have to take down the fossil fuel industries.

It will arrive in bookstores Tuesday, May 15th and can be preordered via Amazon, Barnes & Noble, Indiebound, Indigo, and Books-A-Million.

“A vampire story that is more wish-fulfillment than cautionary tale, giving readers the
treat of seeing someone (at least fictionally) finally do something about seemingly
insurmountable issues like global warming.” —SYFY Wire

“If you can see Ariel in your mind as a vampire, if you can see her as a bloodsucking
environmental crusader, then this is a book for you. And if you can't see that, then get
the book anyway—your horizons need expanding.” —The Oregonian

“If you’ve had your fill of the brooding tormented type of bloodsucker we’re usually
presented with, then DARK FANG and its main protagonist, Valla, is going to
reinvigorate your vampire love.” —The GWW

“Kelsey Shannon adds to Gunter’s literary masterpiece with some seriously impressive
imagery and colors. With a soft modern feel to his lines, Shannon illustrates DARK
FANG with a fluid style that gives a weird mix of ethereal darkness and technical beauty
that I find many creators have a hard time marrying together. When you take in his
drop-dead gorgeous coloring, Shannon takes an already recommended story up
a level, and gives your eyes a feast.” —Geekery Magazine

“A magnificent debut that makes its opinions known on the importance of green living,
but gives you a great story to take you on that journey.” —Multiversity Comics 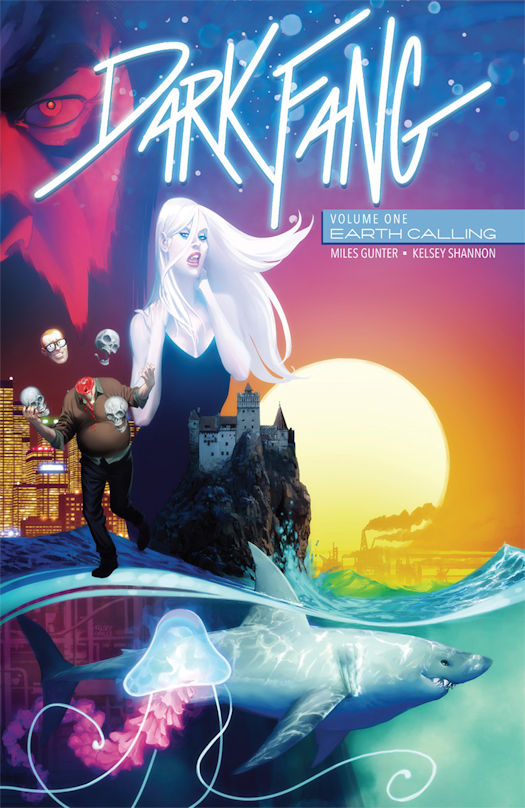