Please welcome Rowenna Miller to The Qwillery as part of the 2018 Debut Author Challenge Interviews. Torn was published on March 20th by Orbit. 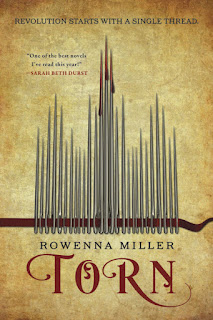 Rowenna:  I was probably about four or five and couldn’t actually write on my own yet, so I dictated a story to my mom and then illustrated it. I think it was about ponies. I’m sorry, Mom.

Rowenna:  Somewhere in between. I know where the story is heading, the basic plot points, and, probably most importantly for me, the major conflicts, themes, and character developments. I usually write a couple of guiding documents for myself—a short summary (like a book jacket blurb) that distills the main arc of the novel (who wants what, what’s in their way, what complicates their plans) and a longer synopsis that hits the major plot points and how the characters intersect and develop. If I can write both of those, I know I have a dynamic and productive enough idea that there’s a book there, but I’m pretty open to surprises.

Rowenna:  Right now, just carving out enough time! I have two small children and, just in case anyone hasn’t told you, kids keep you kinda busy, especially when one is a baby. I don’t say “finding time,” because if you wait to find it, you never will, but scheduling enough time while still staying flexible and able to drop everything for a writing sprint if I do happen to discover a free half hour is a challenge. At the same time, writing is my happy place, so it’s worth it.

Rowenna:  As a kid, I read a ton—the Prydain Chronicles, Tamora Pierce, The Chronicles of Narnia—but I also explored a lot. I was lucky to grow up in the country with trees and hills and permissive parents who didn’t limit my exploration of our little slice of forest…or the neighbors’. I also was (and remain) fascinated by history, and love digging into the history of more ordinary people—women’s history, the lives of marginalized people, military history (not the generals or the campaigns but the average soldier). Between being encouraged to explore and then exploring history with the eye of a bibliophile—there are stories everywhere, and that is probably the strongest guide in my writing.

Rowenna:  As revolution threatens her city, a magic-wielding seamstress must choose between family and ambition.

TQ:  Tell us something about Torn that is not found in the book description.

Rowenna:  Sophie has a lot to lose, as revolution threatens her business just as it’s begun to take off. As the story opens, she develops a professional relationship that grows into friendship with a very influential noble, who (along with giving her business some nice commissions) invites her to take part in her exclusive salon. The concept of a gathering place to discuss ideas was based on the historical practice from the Enlightenment. It’s like book club on steroids meets those late night talks in your college dorm’s common room, and the most interesting part (to me) is that the development of salons in eighteenth century France was heavily influenced by women, who hosted and guided conversation at these gatherings.

TQ:  You've created an innovative magic system. Please tell us about it.

Rowenna:  The magical system in Torn is not widely practiced in the culture it occupies, and what’s more, isn’t widely respected, partially because, in the nation Sophie lives, it’s a practice imported by immigrants. In it, practitioners can imbue physical items with charms for good fortune (or, as Sophie is adamant about avoiding, curses for bad luck). However, it’s not terribly powerful magic as practiced by most casters, and it’s considered by the majority of the people to be a superstition. (It’s very loosely inspired by ancient Roman curse tablets.)

TQ:  What inspired you to write Torn? What appeals to you about writing Fantasy?

Rowenna:  I am a historical costumer and living history nerd, and was researching late eighteenth century jackets called “caraco.” It’s a really interesting time, sartorially speaking, and we have many fashion plates and extant garments that survive to study and learn from. As I was digging into a set of fashion plates, I realized that they were produced in the years leading up to and during the French Revolution—and found myself wondering, if a seamstress could influence the outcome of major world events, how would she? I think that’s what appeals to me about writing fantasy—that “what if?” question, and the ability to think about the “real world” through a different lens.

TQ:  In Torn who was the easiest character to write and why? The hardest and why?

Rowenna:  Sophie and Kristos (sister and brother), especially the two of them together, were probably the easiest to write. Creating their characters and their interpersonal conflict happened in tandem and developed very organically. Quite a few central character traits emerged and were refined by writing their arguments! Oddly, one of the hardest things for me with this project was managing the “background characters”—the other charmcasters Sophie knows, her shop assistants, the nobles she meets. Secondary and tertiary characters are important, and it was important to me that they feel like real people, which is difficult to do when they only appear for short sections of text!

Rowenna:  The major conflict in the novel is a proletariat revolt, so social issues were a given! The system that Kristos and his peers are fighting against is clearly unjust, placing economic and legal power solely in the hands of the nobility. However, it was important to me to write a story with more nuance than the good guys fighting the evil empire. The nobles aren’t entirely blind to their privileged place in the system, but many honestly believe that they are using their wealth and power to benefit everyone. Even Sophie benefits from this system in many ways. The concept of “good” people still benefiting from and contributing to an unjust system felt very relevant to me right now. It’s uncomfortable, but I wanted to write something a little uncomfortable.

TQ:  Please tell us about the cover for Torn.

Rowenna:  I was totally surprised and blown away by the cover! The artists at Orbit created a gorgeous and evocative image—a silhouette in sewing needles that suggests mounting danger. Love it.

TQ:  Which question about Torn do you wish someone would ask? Ask it and answer it!

Rowenna:  Though “historical accuracy” in sewing arts is central to the book, are there inaccuracies?

YES! There are several small liberties taken, particularly that styles of gowns overlap one anther here in ways they didn’t historically, at least not fashionably so. The biggest deliberate inaccuracy for me was that I didn’t want this world to have a whaling industry. Whalebone (baleen) was widely used to build corsets in the eighteenth century (and whale oil and ambergris were major commodities, too), but hey, it’s my world, I got to create it, and whaling just makes me sad, so nope. So any place whalebone might be used, I imagined a lightweight metal (not accurate) substitute. This barely shows up in the text—a court gown is described as having metal in the foundation garments—but it was important to me.

TQ:  Give us one or two of your favorite non-spoilery quotes from Torn.

“There was a feeling, too, that welled within me when the process was working just right. A kind of deep-seated happiness, simple but complete, like the feeling that came with seeing a baby laugh or smelling fresh-baked apple pie or hearing soft rainfall on the roof. And though I was tired—and hungry—after working on a charm for a few hours, I was calmly content.”

“A single crow worries no one, but a flock can strip a field. Revolution must take wing under an entire flock, not one or two voices alone.”

Rowenna:  Thanks so much for having me! 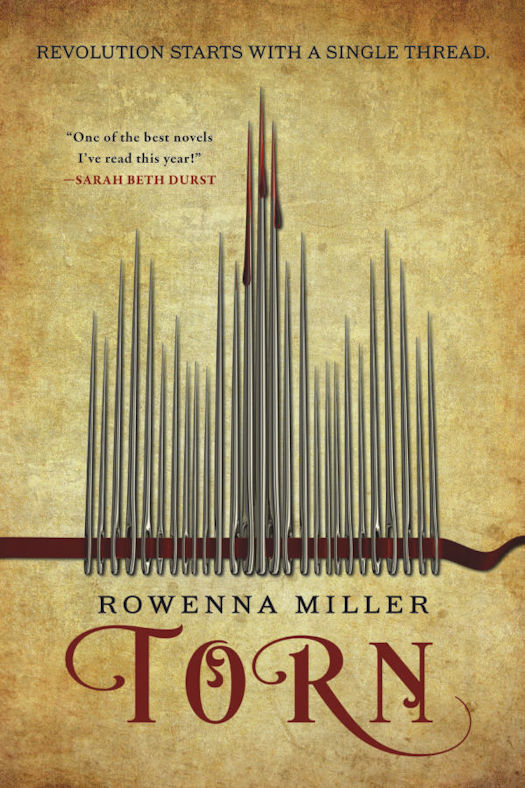 TORN is the first book in an enchanting debut fantasy series featuring a seamstress who stitches magic into clothing, and the mounting political uprising that forces her to choose between her family and her ambitions, for fans of The Queen of the Tearling.

In a time of revolution, everyone must take a side.

Sophie, a dressmaker and charm caster, has lifted her family out of poverty with a hard-won reputation for beautiful ball gowns and discreetly embroidered spells. A commission from the royal family could secure her future — and thrust her into a dangerous new world.

Revolution is brewing. As Sophie’s brother, Kristos, rises to prominence in the growing anti-monarchist movement, it is only a matter of time before their fortunes collide.

When the unrest erupts into violence, she and Kristos are drawn into a deadly magical plot. Sophie is torn — between her family and her future.

Rowenna Miller grew up in a log cabin in Indiana and still lives in the Midwest with her husband and daughter, where she teaches English composition, trespasses while hiking, and spends too much time researching and recreating historical textiles.