Introducing Gene the Signimancer, Rachel the Mercenary and Tiggy "The Genius Professor"


First up, we have Gene, a signimancer which is a special type of mage that uses artifacts to wield magic, who belongs to the Signimancy Guild. He tends to look at the big picture and avoids acting emotionally. He is valued by the Daemons for his knowledge and eloquence. Next, we have Rachel, a mercenary employed by the Signimancy Guild. She's the opposite of Gene, with a fiery temperament, impulsively acting as soon as an idea pops into her head. She often argues with Gene because of their contrasting viewpoints. Though they argue, Gene and Rachel do set their views aside to fight for the cause. Finally, we have Tiggy, a young girl researching the global threat called the "Dark Current." She calls herself "The Genius Professor" and has used her intellect to create strange inventions. Don't underestimate these inventions just because of their silly animal looks ... monsters can't stand against them! 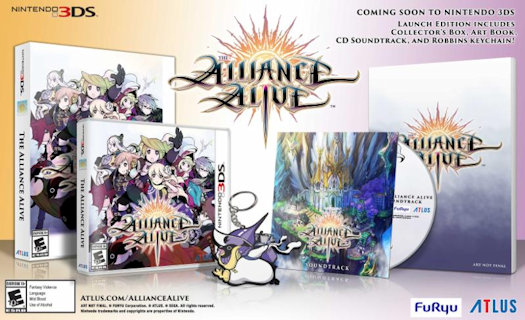 From The Legend of Legacy developer FURYU Corporation and launching March 27, 2018 The Alliance Alive can be pre-ordered now for $39.99 (with commensurate European pricing). The game will come out physically and digitally in the Americas and digitally in Europe.

About The Alliance Alive
One thousand years ago, Daemons invaded the world of Humans

They subjugated Humanity and created the Great Barrier to separate the realms. The world was thrown into upheaval, and the Dark Current was born. It carved a cross-shaped swath across the ocean, swallowing countless cities in its wake. Humanity was decimated. Hundreds of years later, Daemons rule atop a hierarchical society. However, the time for resistance has come. The world is about to change yet again...

Built on a sprawling world replete with numerous secrets to discover, players will need to establish and unite guilds throughout the four realms while battling the Daemons. Use the "Ignition" system, a part of the turn-based combat that allows for deep customization and nuanced gameplay, to reach an enhanced state and deliver devastating Final Strikes. In The Alliance Alive, players will need to keep their wits about them and think strategically to win each fight!