SPY SEAL GETS A SLICK PAPERBACK THIS JANUARY
Collecting issues #1-4 in an oversized deluxe format
PORTLAND, OR, 11/30/2017 — Critically acclaimed cartoonist Rich Tommaso (SHE WOLF, DARK CORRIDOR) will release a trade paperback collection of his espionage tale SPY SEAL this January.

Visually reminiscent of such classic comics as The Adventures of Tintin and Usagi Yojimbo, SPY SEAL welcomes readers into the thrilling world of international espionage.

One of Britain's most covert MI-6 divisions, the Nest, has recruited a brand-new secret agent to their team: Spy Seal! Follow the newbie spy and his furred and feathered colleagues on exciting train rides, high-speed car chases, high-flying air adventures, and down secret underground tunnels, all in an effort to hunt down a dangerous British-turned-Soviet double agent—a slippery spy who poses as an upscale art dealer while covertly killing off important figures of Parliament.

It will be available in bookstores Tuesday, January 30th and is available for preorder via Amazon, Barnes & Noble, Indiebound, and Indigo.

Select praise for SPY SEAL:
“If you’re looking for a comic that’s classic fun with just a hint of edge, SPY SEAL is the
book.” —Monkeys Fighting Robots
“SPY SEAL [is placed firmly] in a milieu of fun and levity, and it reads like a throwback to
a bygone era of uncomplicated, direct storytelling. It’s fun in a way so few comics these
days are, and that offers readers a particular satisfaction.” —AV Club
“The boldness in SPY SEAL’s earnest commitment to its world and its sense of style,
aped from the classic adventure comics we read as children, speaks to its strength, no
matter how loopy its premise is. SPY SEAL just goes with it, with all the grace and
simplicity of its own title. And because if it, it’s one of the most charming and delightful
new comics I’ve read in a while.” —iO9
“Rich and completely original, you won’t find a book like SPY SEAL anywhere else on
the stands.” —Uproxx
“You rarely find a creator who writes, draws, colors, and letters their work and I
commend Tommaso for all his work on SPY SEAL. The art is beautiful. It’s this slick,
seemingly simplistic work that provides this clean look to it all.” —Comicosity
“[SPY SEAL] may rightfully deserve a place alongside some of the more iconic series
to which it pays homage.” —Multiversity Comics 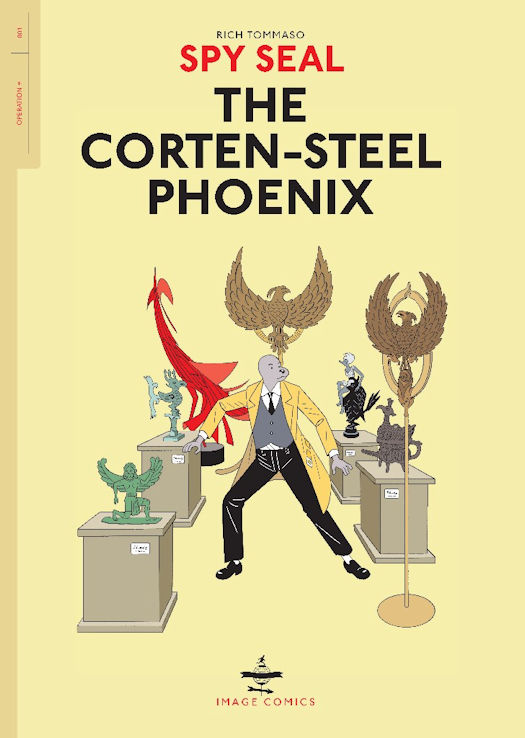 ABOUT IMAGE COMICS
Image Comics is a comic book and graphic novel publisher founded in 1992 by a collective of bestselling artists. Image has since gone on to become one of the largest comics publishers in the United States. Image currently has five partners: Robert Kirkman, Erik Larsen, Todd McFarlane, Marc Silvestri, and Jim Valentino. It consists of five major houses: Todd McFarlane Productions, Top Cow Productions, Shadowline Comics, Skybound Entertainment, and Image Central. Image publishes comics and graphic novels in nearly every genre, sub-genre, and style imaginable. It offers science fiction, fantasy, romance, horror, crime fiction, historical fiction, humor and more by the finest artists and writers working in the medium today. For more information, visit www.imagecomics.com.
Posted by Qwill at 8:04 AM