Interview with Michelle Hauck, Author of the Birth of Saints Trilogy


Please welcome Michelle Hauck to The Qwillery. Steadfast, the 3rd novel in the Birth of Saints trilogy, was published on December 5, 2017 by Harper Voyager Impulse. 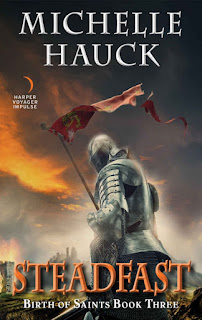 TQ:  Welcome back to The Qwillery. Your new novel, Steadfast (Birth of Saints 3), was published on December 5th. How does it feel to see the end of the trilogy published?

Michelle:  I admit at first it was a giant relief. That was back in June when the deadline was days away and I was still polishing. It was the closest I ever came to not being done by a deadline. There was a lot of pressure then. Now that another milestone has come and gone with the release date, I’m feeling rather nostalgic. If you spend three years working on anything, day after day, there’s bound to be some regret when it ends. I’m going through a grieving period before I can really connect to another story. I think every writer faces that to some degree, even if it’s just putting your head into a different world and different characters.

TQ:  Has your writing process changed (or not) from when you wrote Grudging (Birth of Saints 1) to Steadfast?

Michelle:  There’s more confidence now. A little less editing and revising. I have more trust that what I produce is worthwhile. But my process is pretty much the same. Write in the morning before work. Do a short read through to edit before I add new words. Never plan more than three chapters ahead. I’m not big on outlining or making plans. I’d rather wing the writing process. I didn’t have the ending thought out for Steadfast until more than halfway through writing the draft. I’m still a fly by the seat of my pants writer. Which is kind of interesting because if I don’t know the ending, the characters can’t broadcast it either.

TQ:  What do you wish that you knew about book publishing when Grudging came out that you know now?

Michelle:  I have to go with how much harder marketing and promotion is than the actual writing. I mean you hear that all the time from published writers, but it doesn’t really resonate until you’re in that situation. It’s painful to have to ask for reviews or to ask for people to buy your book. I think most of us have been trained since childhood not to be that way, not to ask for help for ourselves or to push our own agenda. Maybe that’s a female thing, or maybe it’s just me.

TQ:  Which character in the Birth of Saints trilogy surprised you the most? Who has been the hardest character to write and why?

Michelle:  Some of the minor characters really surprised me. As I said earlier I’m a pantser and I don’t really outline or plan. Sometimes I throw in what feels like a minor character, and all of a sudden, they end up with their own point of view. Father Telo was such a character. He was supposed to be in a few scenes to counsel a major character, Alcalde Julian, and I just couldn’t shake him. Father Telo grew to have his own agenda and his own mission to assassinate the Northern leader and he just took on a life of his own, becoming a major thread in Faithful and Steadfast.

The fact that he was a priest made him perhaps my hardest character to write. He was just outside of my experience and the whole write-what-you-know ideal. Father Telo is just so different from me. He had no romance interest. He’s more religious. He’s a male. I had to do a lot more research to write him than any other of my six point-of-view characters.

TQ:  Tell us something about Steadfast that is not found in the book description.

Michelle:  There’s very much an element of women in a male society coming into their own. A subplot of the series is about the male leader of the city—Julian—being forced out due to some mistakes, and the women coming forward to vote in record numbers and installing his wife—Beatriz—as the new elected official—and not just for one city-state, but for two. And then there’s the whole character arc of the husband and wife learning to deal with the power shift in their relationship. I’m afraid there’s a fire in my heart over the whole “She Persisted” situation in the real world and that carried over to my writing.

Michelle:  As I mentioned in the last question there’s the whole women as a segment of society coming into their own. But there’s also a theme of kindness. Let’s not be like the people oppressing us. Let’s choose kindness. Let’s choose tolerance. Let’s care for the suffering of the people being suppressed and see the value in everyone. There’s been too much hate in national policy lately. And I’m really feeling that need to respect all people these days. You see this even more in Steadfast where we finally see the Northern side of this clash of cultures.

TQ:  Give us one or two of your favorite non-spoilery quotes from Steadfast.

Michelle:  This is a quote from a speech by Beatriz to her people: “The Northerners are a people of violence and bloodshed. They took our city—my child—our children. I would not have us be like them. I would have us show them the meaning of kindness.”

And here is Claire trying to convince the Women of the Song to help her against the Northern god. You can guess from her speech that it doesn’t go too well: “The god’s power wiped a squad of soldiers out in the blink of an eye. This is not a joke. We need to be marching out of our swamp to help stop more killing. Even a ‘snit of a girl’ can see that. But unfortunately, that girl is talking to a bunch of old hens, clucking around instead of acting! Stupid and worthless! If we all die, it will be your fault!”

Michelle:  So far what’s next is being lazy. I’ve taken a few months off from writing to just allow myself the free time to splurge on binge watching Netflix. Or to read. My writing heart is still connected to the characters from Birth of Saints and so I’m waiting for a little distance to turn my brain to new characters. Mostly. As I’m going through my writing vacation, I’m also slowly completing chapters for an almost finished rewrite of an epic fantasy I envisioned years ago. Old familiar characters given a new life, but not something completely new. When that’s done then I’ll look toward something totally original.

Michelle:  Thank you so much for inviting me. It’s been great fun! 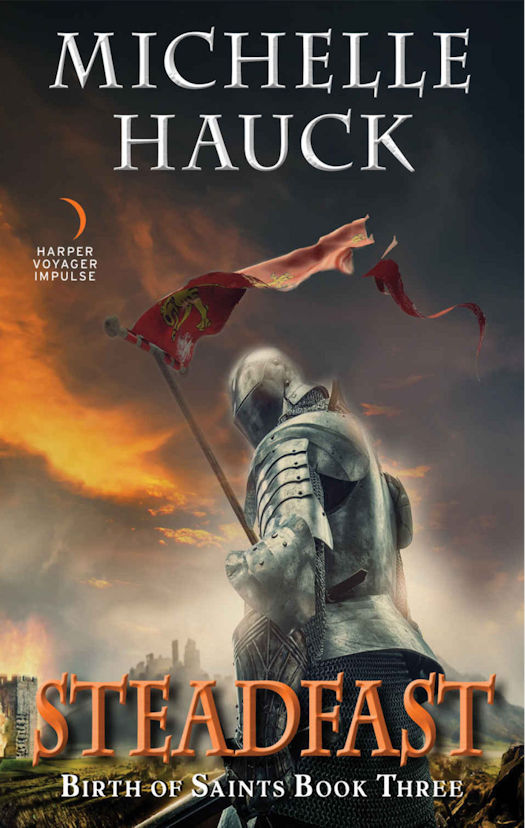 The final novel in Michelle Hauck's Birth of Saints trilogy, Steadfast follows Grudging and Faithful in telling the fateful story of Claire and Ramiro and their battle against a god that hungers for blood.

When the Northerners invaded, the ciudades-estado knew they faced a powerful army. But what they didn’t expect was the deadly magic that was also brought to the desert: the white-robed priests with their lethal Diviners, and the evil god, Dal. Cities have burned, armies have been decimated, and entire populaces have been sacrificed in the Sun God’s name, and it looks as if nothing can prevent the devastation.

But there are still those with hope.

Claire, a Woman of the Song, has already brought considerable magic of her own to fight the Children of Dal, and Ramiro, a soldier who has forsaken his vows to Colina Hermosa’s cavalry in order to stand by her side, has killed and bled for their cause. Separated after the last battle, they move forward with the hope that the saints will hear their prayers, their families will be saved, and that they’ll see each other once more.

A stirring conclusion to the Birth of Saints series, Ramiro and Claire’s journey finds completion in a battle between evil and love. 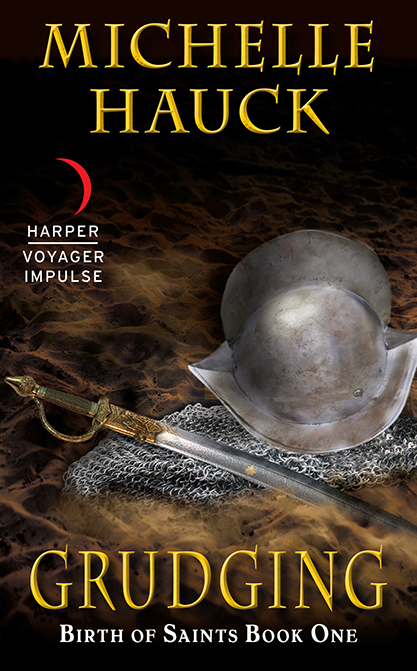 A lyrical tale of honor and magic, Grudging is the opening salvo of Michelle Hauck's the Book of Saints trilogy that combines the grace of Ellen Kushner's Swordpoint with the esprit de corps of Django Wexler's Shadow Campaign series.

A world of chivalry and witchcraft…

and the invaders who would destroy everything

The north has invaded, bringing a cruel religion and no mercy. The ciudades-estados who have stood in their way have been razed to nothing, and now the horde is before the gates of Colina Hermosa…demanding blood.

On a mission of desperation, a small group escapes the besieged city in search of the one thing that might stem the tide of Northerners: the witches of the southern swamps.
The Women of the Song.

But when tragedy strikes their negotiations, all that is left is a single untried knight and a witch who has never given voice to her power. And time is running out. 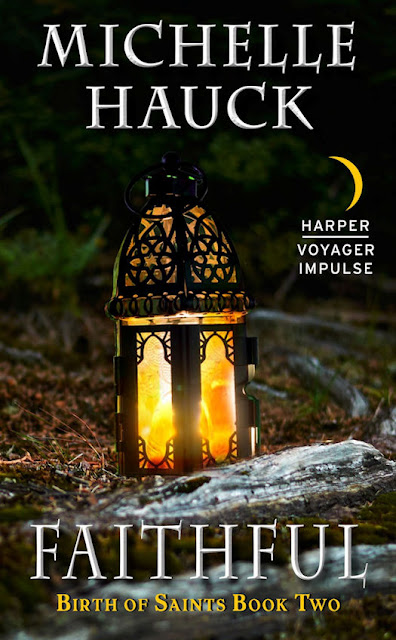 Following Grudging--and with a mix of Terry Goodkind and Bernard Cornwall--religion, witchcraft, and chivalry war in Faithful, the exciting next chapter in Michelle Hauck's Birth of Saints series!

A world of Fear and death…and those trying to save it.

Colina Hermosa has burned to the ground. The Northern invaders continue their assault on the ciudades-estados. Terror has taken hold, and those that should be allies betray each other in hopes of their own survival. As the realities of this devastating and unprovoked war settles in, what can they do to fight back?

On a mission of hope, an unlikely group sets out to find a teacher for Claire, and a new weapon to use against the Northerners and their swelling army.

What they find instead is an old woman.

But she’s not a random crone—she’s Claire’s grandmother. She’s also a Woman of the Song, and her music is both strong and horrible. And while Claire has already seen the power of her own Song, she is scared of her inability to control it, having seen how her magic has brought evil to the world, killing without reason or remorse. To preserve a life of honor and light, Ramiro and Claire will need to convince the old woman to teach them a way so that the power of the Song can be used for good. Otherwise, they’ll just be destroyers themselves, no better than the Northerners and their false god, Dal. With the annihilation their enemy has planned, though, they may not have a choice.

A tale of fear and tragedy, hope and redemption, Faithful is the harrowing second entry in the Birth of Saints trilogy. 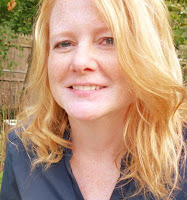 Michelle Hauck lives in the bustling metropolis of northern Indiana with her hubby and two teenagers. Two papillons help balance out the teenage drama. Besides working with special needs children by day, she writes all sorts of fantasy, giving her imagination free range. A book worm, she passes up the darker vices in favor of chocolate and looks for any excuse to reward herself. She is the author of the YA epic fantasy Kindar's Cure, as well as the short story “Frost and Fog,” which is included in the anthology Summer's Double Edge.