Review: Flame in the Dark by Faith Hunter 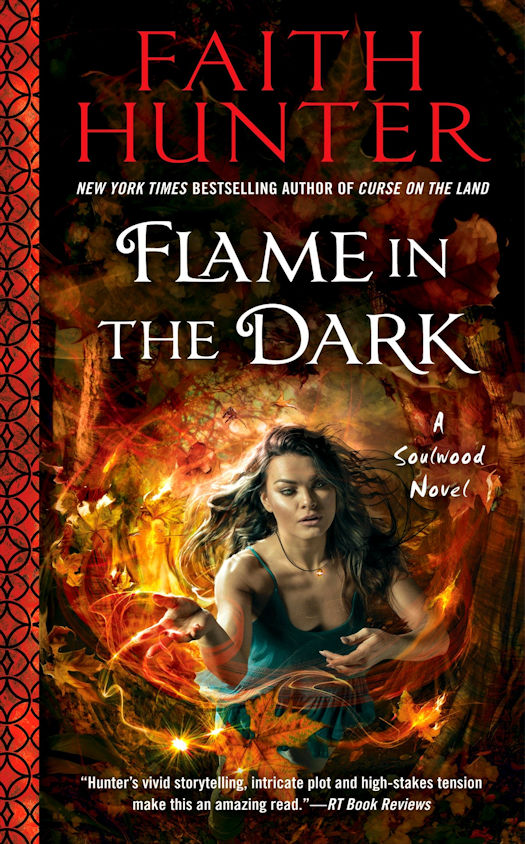 Nell Ingram has always known she was different. Since she was a child, she’s been able to feel and channel ancient powers from deep within the earth. When she met Jane Yellowrock, her entire life changed, and she was recruited into PsyLED—the Homeland Security division that polices paranormals. But now her newly formed unit is about to take on its toughest case yet.

A powerful senator barely survives an assassination attempt that leaves many others dead—and the house he was visiting burns to the ground. Invisible to security cameras, the assassin literally disappears, and Nell’s team is called in. As they track a killer they know is more—or less—than human, they unravel a web of dark intrigue and malevolent motives that tests them to their limits and beyond.

As Hunter eased us into the world of Soulwood, she used her primary character, Jane Yellowrock, to introduce us to Nell Ingram, a young widow fighting against the efforts of a cult-like church to return to the fold. The first two novels involved spillover from Jane’s world, but in Flame in the Dark, Nell is on her own and in the thick of it. She has been accepted as a junior member of the PsyLED team, and as the book opens, she is doing grunt work after an attack on a powerful senator.

The great thing about Hunter’s novels is that she mixes action and mystery with heart and soul. As the pursuit for the assassin becomes more dangerous, the group begins to speculate that the killer is a member of an unknown paranormal group. Nell herself is attacked and nearly killed as she finds a critical piece of evidence. There are burning houses and exploding cars, and a young boy who can cause burns with a single touch.

But at the same time as the investigation, life goes on for Nell. Occam is continuing his pursuit of her, inviting her to dinner. Her relationship with her family is better than ever; in fact, the family is making efforts to send eligible bachelors to Nell in hopes that she will return to the church and help modernize it. The PsyLED team has accepted her as a member, no longer making accommodations for her newness and her lack of “townie” ways. Lastly, Nell’s sister Mud has come of age and appears to have the same powers that Nell has.

Hunter’s skill as a writer comes as she intertwines Nell’s every-day, ongoing life with PsyLED’s adventurous day job. The descriptions of the group meetings always involve food, and the office has a set up for changing and sleeping. The PsyLED group has become Nell’s second family, one for whom she would risk her life, as she does in this story.