The Ghost Fleet Collection in November

THE GHOST FLEET: THE WHOLE GODDAMNED THING MINISERIES TO BE COLLECTED
PORTLAND, OR, 08/14/2017 — All eight issues of the critically acclaimed miniseries THE GHOST FLEET—from writer Donny Cates (GOD COUNTRY, REDNECK) with artists Daniel Warren Johnson (EXTREMITY), Lauren Affe, and John J. Hill—will be collected for the first time into a deluxe, over-the-top volume and available this November from Image Comics.

“I am so incredibly proud to be able to finally bring this insane story to one deluxe volume. The Ghost Fleet is one of the coolest things I've ever been a part of, and it makes me so happy to expose it to an entirely new set of readers,” said Cates. “For fans of Daniel Warren Johnson's beautifully insane and frenetic art, it's a chance to see where it all began. Featuring never-before-seen extras and behind-the-scenes features including the alternate ending that never was! This is the collection I've been dreaming of for a very long time. Come and join us on this crazy, over-the-top adventure one final time.”

For the world’s most valuable, dangerous, or secretive cargo, you don’t call just any trucking service...you call THE GHOST FLEET. When one of the world’s most elite combat-trained truckers takes a forbidden peek at his payload, he uncovers a conspiracy that will change his life, and the world, forever.

It will be available in bookstores on Tuesday, December 5th and can be pre-ordered on Amazon, Barnes & Noble, Indiebound, and Indigo. 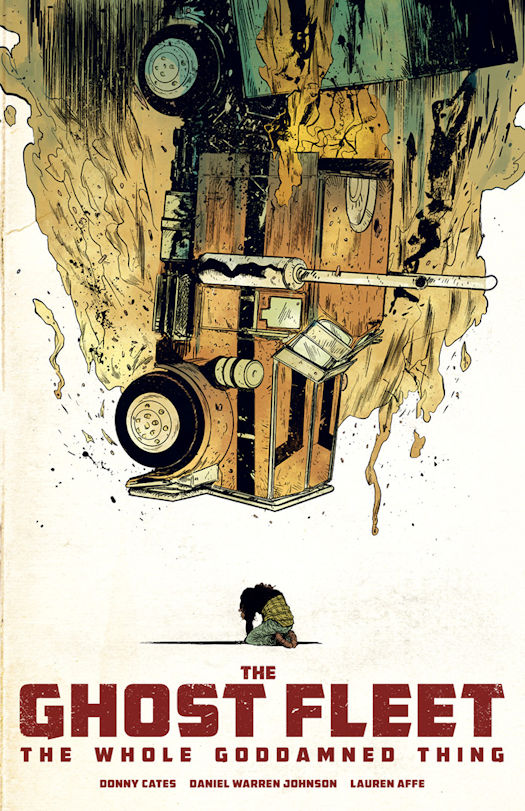