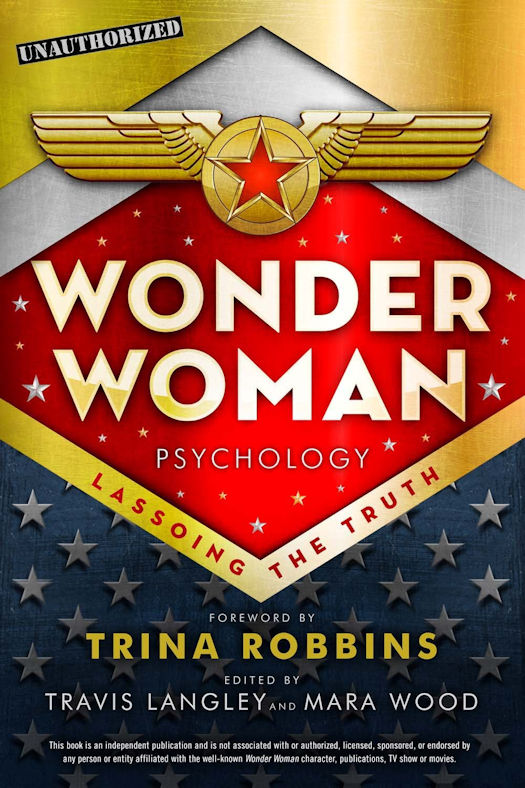 A fascinating analysis of the psychology behind Wonder Woman

For 75 years, Wonder Woman has served as an inspiration to people everywhere. Wonder Woman Psychology examines this powerful superhero—who was created by famous psychologist William Moulton Marston—through 20 essays. This collection will analyze:

Wonder Woman Psychology; Lassoing the Truth takes an in-depth look into what makes the world's most powerful female superhero tick. The Amazon Princess was created by psychologist William Moulton Marston, under the pen name of Charles Moulton. It was Martson's wife, Elizabeth Holloway Marston, who suggested he make the comic about a woman. Editors Travis Langley and Mara Wood do a phenomenal job covering portions of Marston's personal history and theories, as well as educating readers on the psychology of Wonder Woman; a morally healthy character.

Wonder Woman Psychology is packed with many A-list of contributors beginning with the writer of the foreword, Trina Robbins, the first woman artist/writer to work on the Wonder Woman comics. In addition to Robbins, the book also includes a short interview by entertainment journalist Jenna Busch of Susan Eisenberg, who voiced Wonder Woman in the Justice League animated series. The peppering of panels from the comics serve to highlight many of the key analyses, and I especially liked the timeline of entertainment firsts. For example, many people may not realize that Wonder Woman's first live action performance was by Cathy Lee Crosby in a 1974 television movie and not Lynda Carter in the widely popular 1975 television series.

One of the most fascinating chapters is a portion of a memoir written by Elizabeth Holloway Marston entitled "The Tale of a Manx Cat". According to the editors, this piece has never before appeared in print. In it, E.H. Marston details her youth, provides glimpses of her courtship with W.M. Marston and ends shortly after the birth of the couple's first child.

As a lifelong Wonder Woman fan I learned more than I expected from this book. For instance, I was engrossed by the chapter in which Wood discusses Marston's DISC theory which has been recognized for its importance in the history of psychology. Marston's theory, which stands for Dominance, Inducement, Submission and Compliance, is explained via examples from Wonder Woman's own history which makes it easy to understand and engaging. Another highlight for me was the chapter by Mike Madrid and Rebecca M. Langley, dealing with "Parenting Issues in Paradise." I found the discussion on the attachment theory to be very insightful to both Wonder Woman's psyche and my own.

The wide array of contributors, who range from comic book historians, martial artists, therapists, and Ph.D.s in psychology among other professions, makes this non-fiction book about a fictional character very appealing. Each essay sheds light on the complexities of Wonder Woman's character while also equating her issues with themes and topics that are relevant in the real world.

Wonder Woman Psychology: Lassoing the Truth is thought-provoking and educational, but delivered in a format that acknowledges the character's enduring entertainment value and celebrates her well-deserved return to prominence in a traditionally male-dominated field. A must read for fans of Wonder Woman, both old and new.
Posted by Qwill at 8:17 AM