Review: The Strange Case of the Alchemist's Daughter by Theodora Goss 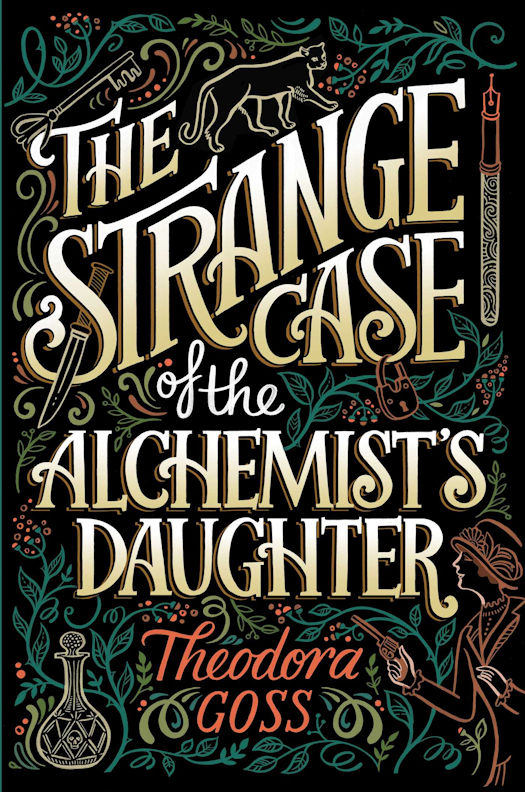 Based on some of literature’s horror and science fiction classics, this is the story of a remarkable group of women who come together to solve the mystery of a series of gruesome murders—and the bigger mystery of their own origins.

Mary Jekyll, alone and penniless following her parents’ death, is curious about the secrets of her father’s mysterious past. One clue in particular hints that Edward Hyde, her father’s former friend and a murderer, may be nearby, and there is a reward for information leading to his capture…a reward that would solve all of her immediate financial woes.

But her hunt leads her to Hyde’s daughter, Diana, a feral child left to be raised by nuns. With the assistance of Sherlock Holmes and Dr. Watson, Mary continues her search for the elusive Hyde, and soon befriends more women, all of whom have been created through terrifying experimentation: Beatrice Rappaccini, Catherin Moreau, and Justine Frankenstein.

Mary Jekyll has led a sheltered life, even for a woman in the late 1800's. Her father, Dr. Henry Jekyll, died over a decade ago, leaving his wealth mysteriously inaccessible to his family. Although appearances were maintained, the truth behind the facade is that Mary was forced to sell almost everything of value over the years in order to retain a few key members of the household staff and hire a nurse to help care for her mentally-ill mother. After her mother's death, Mary realizes she is quickly running out of funds. She begins to investigate her mother's legal papers in the hope of discovering a way to provide for herself and her faithful housekeeper. Mary is astounded to learn her mother had a secret bank account with a monthly withdrawal earmarked "for the care and keeping of Hyde". Could this be a reference to the notorious Mr. Hyde who is still wanted for the brutal murder of an elderly gentleman? And if that is the case, would the authorities still offer a reward for his whereabouts even though the crime was committed so long ago? Mary visits the famous detective Sherlock Holmes for advice, hoping this information might lead to some financial security. Instead, Mary finds that nothing in her mundane life is quite what it seems.

The cast of characters spring from some of literature's most well-known horror stories. The Strange Case of the Alchemist's Daughter features not only Dr. Jekyll's daughter, but also the daughters of doctors Frankenstein, Moreau, and Rappaccini. Each character is well-formed and has her own unique voice. Although introducing the offspring of iconic fictional figures is nothing new, author Theodora Goss offers an original plot and an engrossing mystery that keeps the story appealing and fresh.

Another unique feature of the book is an intriguing story within the story. The daughters are reading a written account of their exploits, much like Dr. Watson's documentation of Sherlock Holmes' adventures. Each chapter features conversations between the women, commenting on the authenticity of the writer's interpretations, giving more accurate and often amusing insights into their personalities. This commentary allows each of the daughters' fascinating backstories to blend seamlessly into the action. For instance, through this plot device it becomes obvious that the insults directed at the incorrigible Diana Hyde actually come from a place of love and indulgence.

Goss does an expert job of clearly exposing who the real monsters are, as well as exploring the idea that the bonds forged from friendship can be the strongest of all. Other strong themes included are those of sisterhood, loyalty and feminism. Goss left a few mysteries unsolved, and hopefully they will be addressed in her next book. Overall, her formula of monsters, mystery, and the macabre is highly entertaining and I definitely recommend The Strange Case of the Alchemist's Daughter.