Redlands #1 Rushed Back to Print!

THE REDLANDS WITCHES TAKE OVER—#1 RUSHED BACK TO PRINT ON DAY OF LAUNCH
PORTLAND, OR, 08/09/2017 — Eisner award-winning colorist and debut writer Jordie Bellaire (PRETTY DEADLY, Vision, Batman) and artist Vanesa R. Del Rey (ZERO, Scarlet Witch, Constantine) have conjured up a hot new series this summer in REDLANDS. Image Comics is pleased to announce that, on the same day as release, REDLANDS #1 is being rushed back to print in order to keep up with overwhelming customer demand.

"Wow! Excited to see so many readers and retailers responding to Redlands in such an enthusiastic way," said Bellaire. "Thank you! Who would have thought people would take to murderous witches so easily! Y'all are my style, macabre and a little scary."

REDLANDS introduces readers to the sleepy, sunny town of Redlands, Florida where the police are failing to maintain control of their old-fashioned town and a coven of killer witches plan to take everything from them.


Select praise for REDLANDS:
"Bellaire's writing blends folklore with a contemporary urgency and Del Rey's art is beautifully, frighteningly immersive. A stunning debut." —Scott Snyder
"Read this beautiful, compelling, epic work, join in the chorus of this scream, and you will see that in the worst of times, our greatest witches do come true." —Tom King
"Nice f*cking job." —Warren Ellis
"A chilling, vibrant, angry debut comic from some of the best creators working in comics today. These pages burn with brilliant art and perfectly rendered characters. Witches and Florida are the peanut butter and chocolate that have been missing from comics (and my life). If you're looking for a horror book that will grab you from page one and won't let go, if you're looking for a comic oozing with topical, all-too-real nightmares, or if you're just looking for a rippin' yarn—pre-order Redlands at your local comic shop today." —Robbie Thompson
"Incredibly empowering and perfectly timed for the current state of the Union." —NYLON Magazine
"Image’s powerful series Redlands highlights the link between womanhood and witchcraft, showing the misogyny behind the mythology... In a disturbing, beautiful way, co-creators Jordie Bellaire and Vanesa Del Rey’s Redlands out today from Image revels in the idea that magic is born from unholy contracts between the devil and clever women." —io9
"Horror fans need to pay attention to Redlands. Hell, everybody needs to pay attention to Redlands—it’s freaking fantastic any way you cut it... You don’t want to miss the darkness that is unfolding here. Trust us." —Nerdist
"Dark and ominous." —Geek.com
"Brilliantly paced with non-stop scares. Do yourself a favor and buy this book." —Horror Talk
"Delivers equal amounts of adrenaline and moody atmosphere." —Impulse Gamer 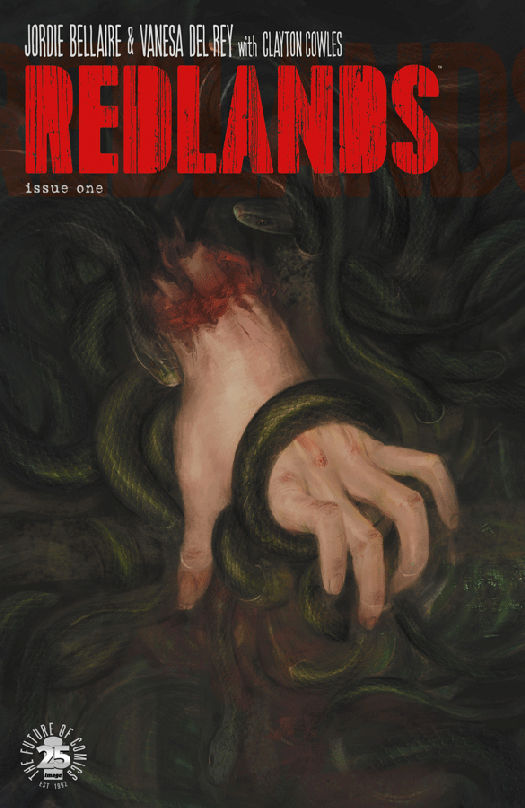 ABOUT IMAGE COMICS
Image Comics is a comic book and graphic novel publisher founded in 1992 by a collective of bestselling artists. Image has since gone on to become one of the largest comics publishers in the United States. Image currently has five partners: Robert Kirkman, Erik Larsen, Todd McFarlane, Marc Silvestri, and Jim Valentino. It consists of five major houses: Todd McFarlane Productions, Top Cow Productions, Shadowline Comics, Skybound Entertainment, and Image Central. Image publishes comics and graphic novels in nearly every genre, sub-genre, and style imaginable. It offers science fiction, fantasy, romance, horror, crime fiction, historical fiction, humor and more by the finest artists and writers working in the medium today. For more information, visit www.imagecomics.com.
Posted by Qwill at 11:01 AM