ATOMAHAWK TO BE COLLECTED INTO DELUXE, OVERSIZED EDITION
FROM IMAGE COMICS
“A screaming black hole feedback squall of death metal Kirby-kozmik energy spinning straight towards your prefrontal cortex. Donny Cates and Ian Bederman forge a stylish, super-heavy 21st-century mythology of blood, sentient steel, and rebel circuitry. A razor-nova of explosive writing and searing visuals that bury themselves deep in your skull. ATOMAHAWK REX!” —Grant Morrison
PORTLAND, OR, 08/08/2017 — Image Comics is pleased to announce that the fan-favorite story ATOMAHAWK by Donny Cates (GOD COUNTRY, REDNECK), Ian Bederman, and Taylor Esposito will be collected into a deluxe, full-color, oversized edition and available this October.

First serialized in Heavy Metal magazine, ATOMAHAWK is the out-of-this-world adventure of the Cyberzerker and his mighty Atomahawk. Readers will join them on their quest to free their imprisoned God.

“Atomahawk is what we call an ‘UNBREAKABLE STORY.’ Meaning anything can happen, and the story will remain in check, said Cates in an interview with Image+ magazine. “Time travel? Sure! Alien Gladiator games set on a giant rotting Frankenstein body stranded in space? Why not? We have SO MANY badass and insane ideas to show you all. HE-MAN FRONTING IRON MAIDEN AS LEAD SINGER WITH THE VOLUME TURNED UP TO LSD!!!! It's a lot of fun, folks!”

ATOMAHAWK #0 (Diamond Code AUG170545) will be available in stores on Wednesday, October 11th. The final order cutoff from retailers is Monday, September 18th. 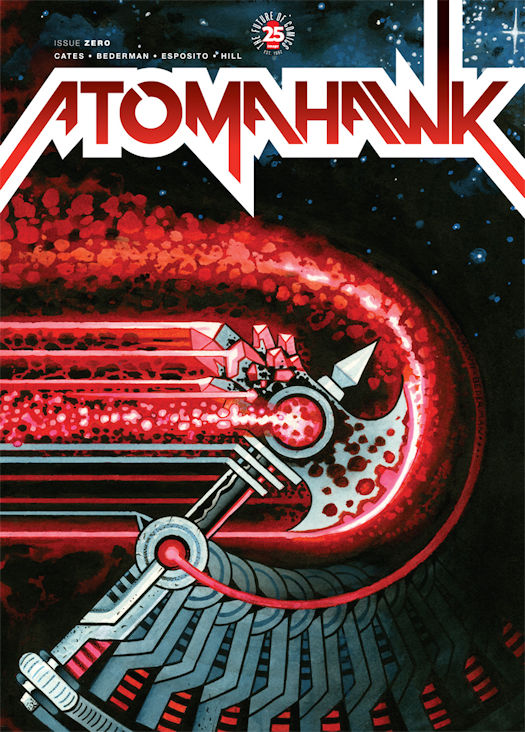 ABOUT IMAGE COMICS
Image Comics is a comic book and graphic novel publisher founded in 1992 by a collective of bestselling artists. Image has since gone on to become one of the largest comics publishers in the United States. Image currently has five partners: Robert Kirkman, Erik Larsen, Todd McFarlane, Marc Silvestri, and Jim Valentino. It consists of five major houses: Todd McFarlane Productions, Top Cow Productions, Shadowline Comics, Skybound Entertainment, and Image Central. Image publishes comics and graphic novels in nearly every genre, sub-genre, and style imaginable. It offers science fiction, fantasy, romance, horror, crime fiction, historical fiction, humor and more by the finest artists and writers working in the medium today. For more information, visit www.imagecomics.com.
Posted by Qwill at 11:00 AM