Interview with RJ Barker, author of Age of Assassins


Please welcome RJ Barker to The Qwillery as part of the of the 2017 Debut Author Challenge Interviews. Age of Assassins was published on August 1st by Orbit. 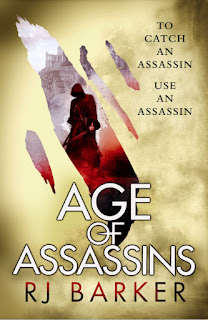 RJ:  Hello Qwillery! Lovely to meet you. I don't think I can answer that very well, it feels like I've always been writing. My earliest definite writing memory is from primary school when I was about ten and I wrote a poem that my teacher sent off to a book. No idea if it got in or not but I do remember the title of the poem and the first line. It was called 'The House' and the first line was 'Within these dark forsaken walls.' That makes me sound like I should have been an Adam's family child, considering how I ended up maybe it was foreshadowing.[1]

RJ:  I make everything up on the spot, almost completely. I usually know the end and a couple of things I'd quite like to happen but outside of that I'm as surprised by half the stuff that happens as someone reading it for the first time will be[2]. It's a tremendously fun way of doing it, for me, anyway.

RJ:  This is a really hard question for me to answer because I simply really enjoy writing[3]. Sometimes I struggle to just sit down and do it because I am distracted by other things, or I am being plan lazy, but the actual doing it is never what I would describe as hard because it's fun. Copy editing is less creative though, that's maybe more challenging, but it's still, overall, something I like doing. It's a process that makes me think about all the decisions I've made and, hopefully, makes what I'm doing into a better book. Which is good for everyone.

RJ:  Everything. The temptation is to reel off books and authors but I think I'm influenced by far more than that (we all are, I imagine) so I shall steer clear of it. Where I am from, northern England, definitely comes through in the landscapes and some of the voices. And I played in bands[4] for a long time so music is huge influence, it definitely informs the mood of the book and everything I write. And the world around me, it seeps in and makes its way out in words.

TQ:  Describe Age of Assassins in 140 characters or less.

RJ:  A fantasy murder mystery with magic, swordfights and intrigue. And antlers. The antlers are the most important bit.

TQ:  Tell us something about Age of Assassins that is not found in the book description.

RJ:  Oh, Mounts! I have a thing about antlers (dunno if you noticed) and in the book they ride about on huge antlered fighting creatures called mounts. Girton and Merela's (his master) mount is called Xus and although he's not in it a huge amount and he can't speak he's absolutely one of my favourite characters.

TQ:  What inspired you to write Age of Assassins? What appeals to you about writing fantasy?

RJ:  The answer to both of these is the same, sort of. I'm not really the sort of person who has an allegiance to any one genre I'm just not very good at doing one thing. There are so many different things out there and I am endlessly curious. I want to try and sample as much as possible so I wouldn't ever describe myself as an “X” reader or writer, I just like books. But when the idea for Age of Assassins came to me it had to be fantasy because, in the great tradition of such things[5], a fantasy element was central to the plot. So it wasn't really a decision, it was a necessity of the story I wanted to tell. I very rarely make decisions if I'm honest, I just do what seems like a good idea at the time.

TQ:  Please tell us about the cover for Age of Assassins.

RJ:  I really like the cover, now. It's by Tom Sanderson, at the-parish.com and he's done a good job of catching the air of mystery and melancholy that pervades the book. It was quite difficult for me to separate out my taste in art, which is very left of field, from the cover of a book which is an illustration with a job to do – to sell the book. But Orbit know their stuff and have nailed it as far as the reception of readers goes[6]. Though you won't learn anything about the book from the cover, apart from a kind of feeling of mystery. And that there is a castle in the book.

TQ:  In Age of Assassins who was the easiest character to write and why? The hardest and why?

RJ:  This is really quite boring but it was all really easy. I wrote it in six weeks, it was literally like being hit by a bolt. I had an idea, dropped everything else I was thinking about to do it and wrote it. It's not changed a huge amount from the first version. It was a bit like being possessed, I just knew what I had to do and it all fitted together. In a way it felt like cheating. It's all seen from Girton's point of view and because that felt so clear to me I didn't really have any problems, I'm trying to think of something to talk about that was difficult so I seem a bit more interesting but I'm not getting anywhere.

Something that was hard was that there are no horses in this world, they use the aforementioned mounts but 'horse' is so ingrained into me that I kept writing it, again and again and again. And the same in book two, Blood of Assassins. I wouldn't be surprised if some horses had crept through and made it into the book y'know. Horses, they're sneaky like that. Tiptoeing past the editing process on their hooves. Bloody horses, sticking their velvety noses in where they're not wanted. *shakes fist*.

RJ:  The act of making the lead character disabled makes it hard to avoid social issues, and you could read the use of magic in the book as an environmental allegory – if that's what you want to do. I think some reflection of our world makes a book more interesting as well, as long as it doesn't interrupt the flow of the book and become preaching. Social issues that are allegorical to our world exist in Age of Assassins but you could easily read the book without noticing – if that's your thing. Books are like onions, layer upon layer and what a reader gets out of it depends on how deeply they want to read. It's an exciting adventure, but there's more there if you want it.

TQ:  Which question about Age of Assassins do you wish someone would ask? Ask it and answer it!

RJ:  What was the first idea you had for Age of Assassins?

RJ: Thanks, RJ, I've always wanted someone to ask me that. It was the name of the world it takes place in: The Tired Lands. There was something so very evocative about those three words. They popped into my head and it was as if I could see the landscape lain out before me. I was amazed it didn't already exist if I'm honest, it felt like somewhere that already existed and it was a really loaded name, it brings a lot with it. And after The Tired Lands the rest followed, the allegory of the disabled hero (echoes of the Fisher King there), this gradually decaying land and his story within it.

TQ:  Give us one or two of your favorite non-spoilery quotes from Age of Assassins.

RJ:  I am going to neatly sidestep this question. There are genuinely funny moments in AoA and thrilling actiony moments too but it's all dependant on you knowing Girton and the characters around him. I always feel that nipping a short quote out of a book is a bit like saying you have a beautiful coat and when someone asks to see it showing them two small bits of the yarn it's made from. It might be very nice string and everything, but it won't help you see the jacket. Gosh, that makes me sound incredibly po-faced and serious doesn't it?[7] Read the book, it's best for everyone, then you can choose your own quotes and I won't feel like I'm crowing.

RJ:  Well, book two is edited and book three is written, so next up I have copy edits for book 2 and making book 3 good. Then something new, hopefully. I'd quite like to do something involving sailing ships and big cannons but I really am quite fickle so this may change.

RJ:  Thank you for having me, Qwillery.

1 - There are a lot of black clothes in our house. A lot.
2 - Hopefully.
3 - What is that noise? It's the hubris alarms, Sir.
4 - Badly.
5 - How do you know something is a fantasy book? If you take out the fantasy element it falls apart. I can't remember whose rule this is and it was originally for SF but it is a good one that works most of the time.
6 - Also, a mystery, for who is that hooded figure on the cover?
7 - I am making a serious face. 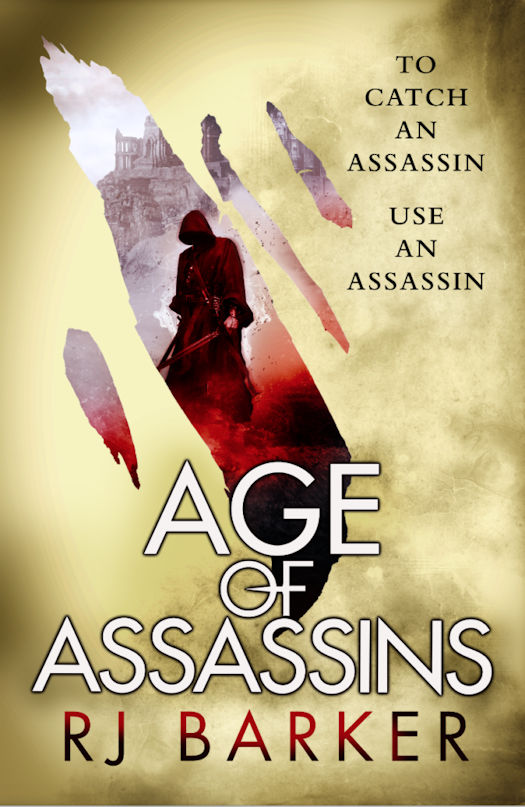 IT'S A GAME OF ASSASSIN VERSUS ASSASSIN

Girton Club-foot has no family, a crippled leg, and is apprenticed to the best assassin in the land.

He's learning the art of taking lives, but his latest mission tasks him with a far more difficult challenge: to save a life. Someone is trying to kill the heir to the throne, and it is up to Girton to uncover the traitor and prevent the prince's murder.

Age of Assassins is the first in an epic new trilogy set in a world ravaged by magic, featuring a cast of assassins, knights, ambitious noblemen, and fools.

RJ Barker is a softly-spoken Yorkshireman with flowing locks. He lives in the frozen north with his wife and son, and divides his time between writing and looking after his son.