Please welcome Marina J. Lostetter to The Qwillery as part of the of the 2017 Debut Author Challenge Interviews. Noumenon was published on August 1st by Harper Voyager. 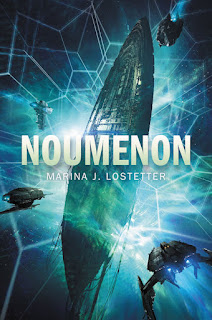 Marina:  Thank you for having me! My love for writing started in the fourth grade. I even remember the first short story I wrote, about my friends and I getting lost in the woods (truth be told, it was more or less a long list of the ways that I was prepared for the situation).

I began to pursue writing professionally around 2010, after graduating from college.

Marina:  Plotter, all the way, though my outlines are largely train-of-thought block paragraphs that contradict each other. Outlining is where I get to tell myself the story and not worry if it sounds pretty or makes sense, which means it's the part I enjoy the most.

Marina:  The upside to plotting for me is the focus it brings to drafting a story--the words flow well once I know where I'm going and what I'm trying to say. The downside is my tendency to try to bend the characters to fit the plot. I often write myself into corners because I want events to happen a certain way, but it doesn’t make sense for the characters to make the choices I want them to.

Marina:  Books I read early that still resonate with me include A Wrinkle in Time, Holes, Wolf Tower, and The Giver. As I grew, sci-fi like Hyperion, Vellum, and Calculating God hit themes that I explore in my own work. Video games have also influenced me greatly--the Final Fantasy series from Square Enix especially. I also really love history and science, and non-fiction in both subjects have been a boon for me.

TQ:  Tell us something about Noumenon that is not found in the book description.

TQ:  Please tell us about the title of the novel.

Marina:  A Noumenon is the flip side of a phenomenon. It is a thing in and of itself, the unmeasurable reality. While technically everything has a noumenal quality (philosophically speaking), the example I like to give is thought: we know thoughts and ideas exist, they are realities, we can measure their effects and some of their causes, but we cannot detect or measure ideas themselves as individual things.

In the book, the convoy's mission is designated Noumenon because its end is an untouchable reality for its founder. Noumenon as a theme extends well into book two.

TQ:  What inspired you to write Noumenon? What appeals to you about writing Space Opera?

Marina:  I love alien artifact stories. And big dumb objects. I love looking at a strange, far off phenomena and coming up with answers to, what the hell is that? I also love solving mysteries, especially those where you realize the fictional universe, or parts of it, function completely differently than you first thought. All of those loves play into the beginning seeds of what became Noumenon (it was a short story long before it was a novel), and my affinity for Space Opera in general.

TQ:  What sort of research did you do for Noumenon?

Marina:  Most of my research centered around variable stars, genetics (histones especially), and electrical engineering.

TQ:  Please tell us about the cover for Noumenon.

Marina:  The artwork was done by Steven Messing, the overall design is by Owen Corrigan, and it is absolutely beautiful! It doesn't depict a specific scene so much as important elements of the story. I won't give away too many details, but the large object you see in the center is called The Seed.

TQ:  In Noumenon who was the easiest character to write and why? The hardest and why?

Marina:  I.C.C. was the easiest to write personality-wise, but a tad difficult voice-wise. Empathy is its greatest virtue, and I let that be my guide. The most difficult overall to write was probably the various clones of Jamal Kaeden, largely because each of them goes through dramatically different circumstances. Staying true to who he is on a base level, while also taking into account how these vastly different experiences would change his decision making, was a challenge.

Truth be told, these are my two favorite characters, in no small part because I feel like I've spent the most time with them.

Marina:  I come from the school of thought that believes the majority of storytelling is partisan in some way. Either it holds up the status quo, or it doesn't, and so fundamentally if you're writing a novel with any kind of depth, it's going to include social issues (either by pointing them out or blatantly glossing over them).

Noumenon outright touches on themes of prejudice, social stratification, and genetic predestination. Also, in an effort to realistically reflect the kind of world that could come together to create the convoys and their missions, I have a vast and international cast of people from different backgrounds, which some people might take as a statement on social issues in and of itself.

It's important to me to try and tell stories that are both fun and thoughtful, and I hope I've been able to do that with Noumenon.

TQ:  Which question about Noumenon do you wish someone would ask? Ask it and answer it!

Marina:  Ooh, this one is hard! Um, probably: Do you think you've written a dystopic novel?

I ask myself this, because I've seen people categorize Noumenon as a dystopia. But that's not what I set out to write. The book has an overall hopeful and positive outlook. And while there are definitely moments of dystopia, the novel spans two thousand years, and like any other society, the convoy has its ups and downs. There are wondrous highs and terrifying lows, and nothing is set in stone. Their civilization evolves. Sometimes it's ideal, sometimes it encapsulates everything that can go wrong with social constructs. I really set out to write a continuum, to explore humanity at its best and worst.

TQ:  Give us one or two of your favorite non-spoilery quotes from Noumenon.

"Earth wants to be comfortable. The more comfortable someone is, a society is, the less likely they are to seek change, even positive change."

"They may not appreciate our point of view. We might frighten them, or bore them, or make them uncomfortable. This does not mean we should go away."

Marina:  Thanks again for having me! 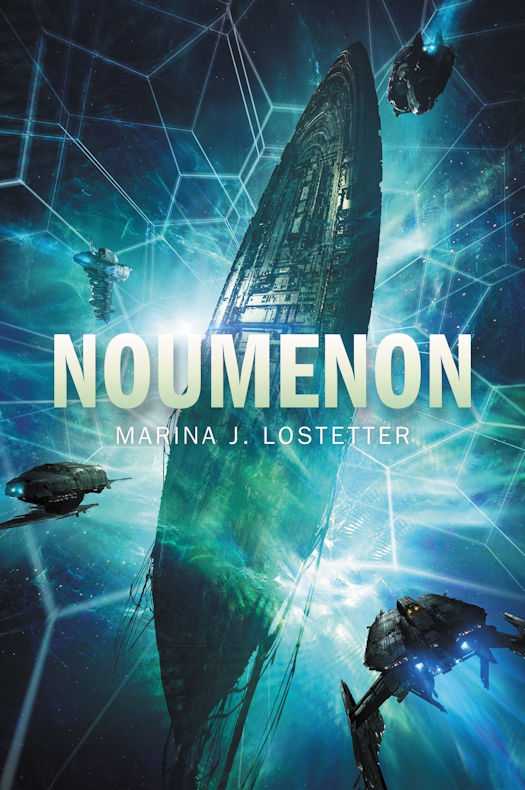 With nods to Arthur C. Clarke’s Rama series and the real science of Neal Stephenson’s Seveneves, a touch of Hugh Howey’s Wool, and echoes of Octavia Butler’s voice, a powerful tale of space travel, adventure, discovery, and humanity that unfolds through a series of generational vignettes.

In 2088, humankind is at last ready to explore beyond Earth’s solar system. But one uncertainty remains: Where do we go?

Astrophysicist Reggie Straifer has an idea. He’s discovered an anomalous star that appears to defy the laws of physics, and proposes the creation of a deep-space mission to find out whether the star is a weird natural phenomenon, or something manufactured.

The journey will take eons. In order to maintain the genetic talent of the original crew, humankind’s greatest ambition—to explore the furthest reaches of the galaxy— is undertaken by clones. But a clone is not a perfect copy, and each new generation has its own quirks, desires, and neuroses. As the centuries fly by, the society living aboard the nine ships (designated Convoy Seven) changes and evolves, but their mission remains the same: to reach Reggie’s mysterious star and explore its origins—and implications.

A mosaic novel of discovery, Noumenon—in a series of vignettes—examines the dedication, adventure, growth, and fear of having your entire world consist of nine ships in the vacuum of space. The men and women, and even the AI, must learn to work and live together in harmony, as their original DNA is continuously replicated and they are born again and again into a thousand new lives. With the stars their home and the unknown their destination, they are on a voyage of many lifetimes—an odyssey to understand what lies beyond the limits of human knowledge and imagination.

Marina J. Lostetter’s original short fiction has appeared in Lightspeed’s Women Destroy Science Fiction! and InterGalactic Medicine Show, among other publications. Originally from Oregon, the former winner of the Writers of the Future Award now lives in Arkansas with her husband, Alex, and enjoys globe-trotting, board games, and all things art-related.