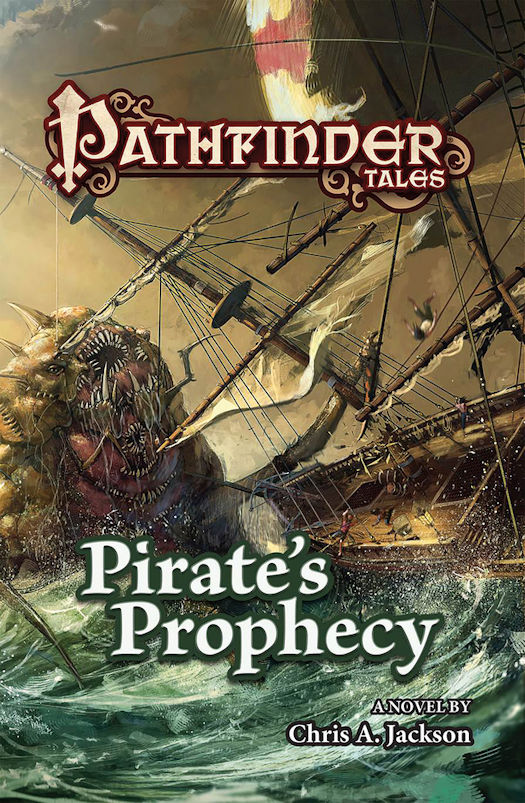 Paizo Publishing is the award-winning publisher of fantasy role playing games, accessories, and board games. Pathfinder Tales: Pirate's Prophecy is the continuation of their popular novel series.

Captain Torius Vin and the crew of the Stargazer have given up the pirate life, instead becoming abolitionist privateers bent on capturing slave ships and setting their prisoners free. But when rumors surface of a new secret weapon in devil-ruled Cheliax, are the Stargazers willing to go up against a navy backed by Hell itself?

Pirate’s Prophecy is Chris A. Jackson’s third book in the Pathfinder series. Unfortunately, I could tell I was missing a lot of back history with the characters in the book. I felt like I was having dinner with my wife’s old high school friends—unable to laugh at their inside jokes or understand what’s not being said as much as what is being said. That’s not to say I didn’t enjoy myself. The food was still good and the company friendly. Alright I’ve played out this analogy.

Jackson’s a skilled writer and it shows by the fact that I knew I was missing things but I didn’t mind that much as the characters were entertaining and the story and plot kept me interested. It’s hard to mess up a pirate adventure. Add in some subterfuge and you’ve got a winner idea in my book.

The pirate crew of the Stargazer were all engaging. The main characters in this book are: Captain Torius Vin, who struggles with his old life of simple piracy and his new found life of acting as a spy and saboteur; Celeste, the Captain’s love interest who is a Naga (mythical snake with a human head) and suffers from time loss while stargazing; and Vreva Jhafae a female spy who tries to discover what dangerous weapon is about to be unleashed on her nation.

If that doesn’t grab your interest you’ll be pleased to know that Jackson is a master at description and keeps the flow of the story moving. You feel like you’re on the deck of the Stargazer or in the seedy docks of Ostenso. Your heart races in combat and worry regarding whether or not Vreva Jhafae will be be caught.

Pirate’s Prophecy is a Nautical adventure with plenty of nail-biting moments. You’ll find it hard to put down. I will say there are definitely some things you’ll feel like you’re missing as this is the third book with these characters, but if you’re not the type to be put off by that, I would recommend giving it a read—or go buy the first two books. I’d recommend this book for Young Adults and Adults as there is minor violence and adult situations. Perfect for fantasy lovers, nautical adventurers and fans of spy craft.
Posted by Qwill at 6:47 AM