PORTLAND, OR, 11/15/2017 — Madefire, the award-winning standard in digital comics and innovator of the proprietary Motion Book™ format teams up with Image Comics, the publisher of some of the top selling, award-winning comics in the industry, to make available a trove of back catalog titles to the Madefire platform.

“We’re thrilled to provide our fans with the opportunity to enjoy a broad range of Image's graphic novels and collections from our amazing creators across a wide range of digital devices thanks to the Madefire platform,” said Chris Ross, Director of Digital Sales at Image Comics. “Madefire complements our established digital collections and there’s no doubt that readers will relish the opportunity to find their new favorites in this revolutionary format.”

“The addition of Image Comics is an ideal fit for our platform and we feel both companies share similar values when it comes to supporting artists and storytellers. Madefire is committed to supporting indie creators, uniquely allowing self-publishing on the platform and giving aspiring creators the forum to bring their work to the masses. Image Comics are renowned for their creator-owned philosophy, protecting the vision of the talent who bring their stories to life. For this reason alone, we couldn’t be happier to welcome Image Comics to the Madefire family.” said Madefire CEO and Motion Book creator, Ben Wolstenholme. “Madefire was designed as a digital platform for storytelling and Image Comics has published some of the most visually stunning, and memorable stories ever created. Today’s announcement continues to demonstrate our commitment to be the ultimate destination for comic and Motion Book content, as well as embracing new, independent IP.”

The addition of Image Comics’ iconic catalog is the latest in a spate of content acquisitions for Madefire, including recently inked deals with Marvel Comics®, DC Comics®, and brings together a vast library of digital works that include over 30,000 comics, graphic novels and Motion Books, produced by the best creators and publishers in the industry, including IDW®, TNT®, 20th Century FOX®, Archie®, BOOM!®, Blizzard®, Valiant®, Dynamite®, Titan®, and more.

Madefire, the Madefire “open-book” logo, and Motion Books are all registered trademarks of Madefire, Inc. 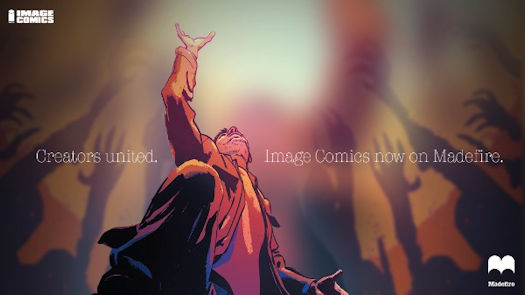 
ABOUT MADEFIRE
Founded in 2011 by Ben Wolstenholme, Liam Sharp and Eugene Walden, Madefire is a media and technology company, and creator of the award-winning Madefire app. Madefire provides creators and publishers the cutting-edge Motion Book publishing platform which enables a digital-first approach to publishing cross-platform in multiple formats. Madefire is backed by Toni Schneider (former CEO Wordpress) at True Ventures, as well as Bill Woodward (Former Chairman and co-founder Macromedia) with angel investors including Sina Tamaddon, former Senior Vice President of Applications for Apple Inc. The Board of Advisors also includes Mike McCue, CEO and co-founder of Flipboard; Dave Gibbons, co-creator of Watchmen, the bestselling graphic novel of all time; and Bill Sienkiewicz, widely recognized as one of the greatest innovators of sequential art.