Please welcome Ash Fitzsimmons to The Qwillery as part of the of the 2017 Debut Author Challenge Interviews. Stranger Magics is published on November 21st by Harper Voyager Impulse. 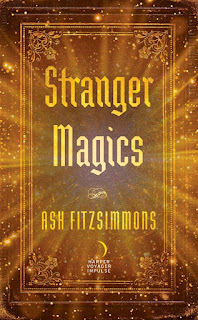 Ash:  Thank you for having me! I’ve always loved reading, and writing gradually became an extension of that. I wrote my first novel at nineteen, and I was hooked.

Ash:  When I first tried my hand at long-form fiction, I was a pure pantser—I had ideas and general thoughts about scenes, but I felt my way along. With time, I’ve become a plotter. I may not map out every moment in the story before I begin, but I like to have more than a notion of where I’m headed and how I’m getting there. If nothing else, plotting helps me memorialize ideas for scenes I may not write for months, and it’s always nice to go back to your notes and have one of those, “Oh yeah, right,” moments when you think you’re stuck.

Of course, there’s always room for improvisation in writing, and characters tend to surprise you. Once you get to know your cast, some of those carefully plotted chapters begin to unravel. I’ve found that while you can try to force a plot upon characters, it seldom ends well.

Ash:  Finding enough time! I’m the sort of person who needs to stay at it daily—I get antsy when I’m away for too long, and the story starts to become stagnant in my mind. But responsibilities don’t disappear just because I’d like to spend some quality time with my computer, which can lead to a lot of odd-hours work and a touch of guilt every time I turn on the television.

Ash:  I’ve always had a fondness for the fantastic. Fairy tales, mythology, folklore, urban legends, science fiction, horror, and fantasy have long been staples of my bookshelves.

Ash:  A lovelorn half-fae bookseller, his amoral brother, a smartass wizard, and an ersatz knight race to save magic and the world. We may be doomed.

TQ:  Tell us something about Stranger Magics that is not found in the book description.

Ash:  Wizard is an ungendered term in the story, and my wizard protagonist is a talented young woman who’s peeved that she’s been unjustly prevented from using much of her power. But that may be about to change…

TQ:  What inspired you to write Stranger Magics? What appeals to you about writing Urban Fantasy? What do you think is the continuing appeal of stories about the fae?

Ash:  There are so many current interpretations of the fae, ranging from benevolent (or at least benign) to malicious, making them fairly malleable for story purposes. But even when they look like us, they remain something other, which I think is a large part of their appeal.

As for Stranger Magics, it began as a bit of rumination: take an ancient being with extraordinary power, mostly human sensibilities, and a strong aversion to iron, plop him down in the modern world, and what would he do with himself? The rest of the story and its setting gradually came forth.

TQ:  What sort of research did you do for Stranger Magics?

Ash:  I revisited the folk and fairy tales I knew, looked into the mythology surrounding the older interpretations of fae creatures, dusted off my Shakespeare, and used all of that as a jumping-off point. On a more nuts-and-bolts note, once into the story, I spent considerable time on Google Maps, trying to plot routes (sometimes from nonexistent places!) and keep a plausible timeline. Juggling multiple time zones can be tricky.

TQ:  Please tell us about the cover for Stranger Magics?

Ash:  The cover design is by Alicia Tatone, and I love how it turned out. An old book is featured heavily in the story, and…nope, no spoilers!

TQ:  In Stranger Magics who was the easiest character to write and why? The hardest and why?

Ash:  Toula, the wizard, was probably the easiest character for me to write. She seemed to appear fully formed—blue-tipped hair, attitude, and all. Robin, a faerie, was less forthcoming, but since he’s at best an annoyance to every other character in the story, I suppose I shouldn’t be surprised that he was sometimes difficult to pin down.

TQ:  Which question about Stranger Magics do you wish someone would ask? Ask it and answer it!

Ash:  “This is your first novel, right?”

Published novel? Absolutely. But as I mentioned, I wrote my first novel back in college. It was a 270,000-word doozy, a great learning experience for me but unpublishable at the time. That realization came as a disappointment back then, but in retrospect, I’m glad that novel wasn’t “The One.” After all, writing is like any other skill: it takes work and plenty of practice, and your first attempt will probably not be your best product. By my count, and depending on whether I choose to remember an unfortunate cycle of short stories, Stranger Magics is my thirteenth novel-length work.

TQ:  Give us one or two of your favorite non-spoilery quotes from Stranger Magics.

Ash:  Sure thing. Robin to Colin, in a moment of brotherly…well, tolerance:

He stood, took a long last draw, then stubbed the cigarillo out and threw it toward the street. “You’re a high lord of Faerie,” he said, clasping my shoulder. “Try to act like it. Right now—and I’m quite serious about this—you’re embarrassing me.”

Ash:  While nothing is set in stone yet, I’d love to continue the story begun in Stranger Magics. We’ll see! 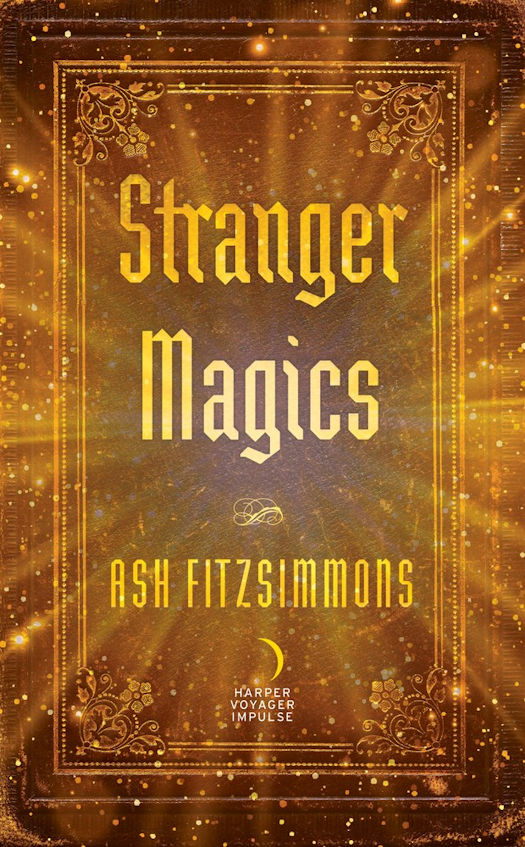 No one holds a grudge quite like a faerie . . .

All Colin Leffee wants is to be left alone: to run his used bookstore in peace, and to quietly drink himself to sleep every night in an attempt to drown out the memories of eight-hundred-plus years of existence.

Unfortunately, when a sullen teenage changeling is flung out of Faerie and onto his doorstep, the long-suffering, wayward son of Titania knows his dreams of solitude are dust. Colin—or Lord Coileán, as he is known to the Faerie court—must track down Meggy, the love of his life, and figure out how her child ended up in Titania’s clutches to begin with.

But with family, it’s never simple. He finds Meggy, only to see her yanked into Faerie—and the doors between the realms slammed and locked behind her. Now, it’s not just her life& at stake . . . but the fate of magic itself.

Always the loner, Colin reluctantly joins forces with an intensely stubborn wizard, a young priest-in-training who fancies himself a knight, and his half brother Robin (the last most definitely not by choice) on a quest to reopen the doors and restore the balance between the realms. And with exiled queen Mab plotting in the shadows to take Titania’s throne, and the wizards of the governing Arcanum hiding their own agenda, Colin can’t be sure whom to trust—or whether he’ll live long enough to see the mission through.

When not writing fiction, ASH FITZSIMMONS is an appellate attorney and an unrepentant car singer. Visit her at www.ashfitzsimmons.com.