The Fifth of November,


The Gunpowder Treason and Plot;


I know of no reason


Why the Gunpowder Treason


Should ever be forgot!


I thought I would start this week's review with a little poetry and a few of the lines from the famous poem about Guy Fawkes. Every time I think about this poem I hear Hugo Weaving as V, from the movie V for Vendetta, saying them in my head. Hope you are enjoying the 5th of November and will enjoy this review!

This week I am only going to tell you about 1 book that I have read recently. I haven't read another book quite like it and I didn't want anything to distract from Fifteen Dogs by André Alexis.

The story starts with the gods Apollo and Hermes having a quiet beer in a bar in downtown Toronto. The pair start to contemplate what would happen if animals had human intelligence. When the conversation gets competitive Apollo bets Hermes a year of servitude if his theory that any animal who had human intelligence would still die unhappy. They inflict their experiment on 15 dogs staying overnight in a veterinary clinic. As the gods watch overhead the pack discover that they are more man than man's best friend. As Benjy the beagle moves from home to home, Prince creates poetry while Manjnoun develops a strong bond with a couple that defies anything that the gods could have ever imagined.

Hermes and Apollo act as you would expect any immortal to act, without a lot of compassion or empathy. To the pair what happens to the dogs is irrelevant to who wins the bet. The dogs pack structure doesn't work with their humanity and there are some devastating repercussions. Fifteen Dogs is definitely a one of a kind novel. Alexis makes some clever, if not a bit depressing, observations about mankind and it's obvious he understands dogs. There is a strong theme about loss throughout the story - the loss of the dogs' past lives, the loss of belonging and loss of life. The story is very dark so don't expect a jaunty tale of puppies and pooches playing cards or taking themselves out for walks. The book is less than 200 pages and despite the sometimes harrowing content it is a very quick read. Alexis also worked with local poets to create original 'dog' poetry. Each poem includes the name of one of the dogs that feature in the story so see if you can find them all. A couple are really hard so good luck! I found this book very moving and sad but its uniqueness made it compelling. If you are a dog lover and looking for something different then this is a must read.


That's all for this week. I hope you had a happy Halloween and for those in the UK - penny for the Guy! 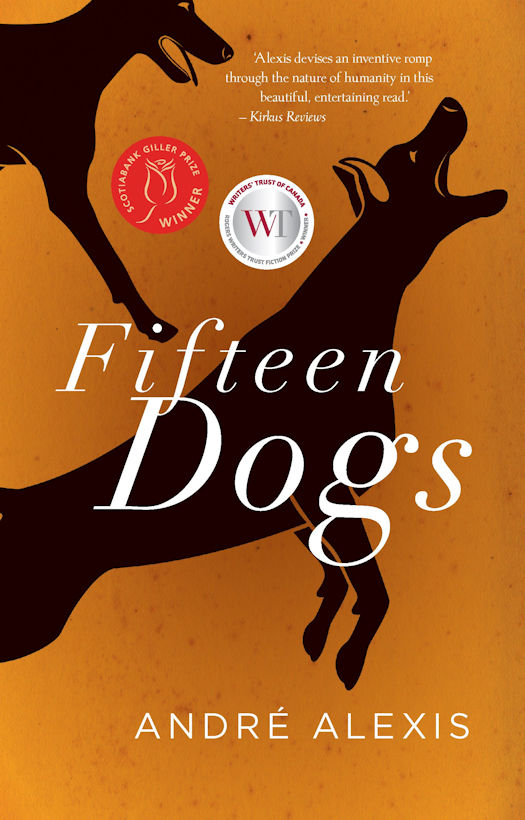 An utterly convincing and moving look at the beauty and perils of consciousness.

WINNER OF THE 2015 GILLER PRIZE

FINALIST FOR THE 2015 TORONTO BOOK AWARDS
— I wonder, said Hermes, what it would be like if animals had human intelligence.

— I'll wager a year's servitude, answered Apollo, that animals – any animal you like – would be even more unhappy than humans are, if they were given human intelligence.

And so it begins: a bet between the gods Hermes and Apollo leads them to grant human consciousness and language to a group of dogs overnighting at a Toronto veterinary clinic. Suddenly capable of more complex thought, the pack is torn between those who resist the new ways of thinking, preferring the old 'dog' ways, and those who embrace the change. The gods watch from above as the dogs venture into their newly unfamiliar world, as they become divided among themselves, as each struggles with new thoughts and feelings. Wily Benjy moves from home to home, Prince becomes a poet, and Majnoun forges a relationship with a kind couple that stops even the Fates in their tracks.

André Alexis's contemporary take on the apologue offers an utterly compelling and affecting look at the beauty and perils of human consciousness. By turns meditative and devastating, charming and strange, Fifteen Dogs shows you can teach an old genre new tricks.