The Further Adventures of Nick Wilson Coming in January


“I love this comic book by Eddie Gorodetsky. If you love comic books you will for reals love this.” —Sarah Silverman

PORTLAND, OR, 10/31/2017 — Image Comics will debut THE FURTHER ADVENTURES OF NICK WILSON created by Emmy Award winning writer-producer Eddie Gorodetsky and Eisner Award winning writer Marc Andreyko. Gorodetsky, whose credits include Mom, Big Bang Theory, and Theme Time Radio Hour with Bob Dylan, teamed up with Andreyko whose recent collection Love Is Love united the comics world to raise money and awareness in the wake of the Orlando LGBTQ shootings.

Nick Wilson, their first collaboration, is illustrated by comics veterans Steve Sadowski and Ian Churchill. Colored by Hi-Fi Colour Design, lettered by A Larger World Studios, and edited by Shannon Eric Denton with covers by Pete Woods and Ian Churchill.


THE FURTHER ADVENTURES OF NICK WILSON is a story for anyone who failed publicly, who didn’t prepare for a second act in their life, who hit a wall and didn’t know how to recover. For a few years in his early 20s, Nick Wilson had super powers and all the acclaim associated with them. When those powers vanished, so did his fame, sending him from national hero to late-night punch line. By the time we pick up his story, he is not yet 30 and barely a name in a trivia contest. Faced with a life in a rear view mirror full of lost powers, faded glory, former enemies, ex-girlfriends, and forgotten grudges, Nick struggles to figure out who he is today. Packing on an extra 20 pounds and peering through a medicinal marijuana haze, he is trying to build a future when all that’s left is just a man who hasn’t been super for a very long time. These are THE FURTHER ADVENTURES OF NICK WILSON.

“After reading comic books all my life, it was exciting to write one,” said Gorodetsky. “I kinda learned to write scripts by imagining comic panels in my head like instant storyboards, and it was really exciting to actually make one and work with artists and make the world and characters come alive from the ground up.”

Andreyko added: “Working on this project with Eddie, Stephen, Ian, and Pete has been an absolute joy. I'm incredibly proud of the book we've made, and I hope fans enjoy it even half as much as we did making it.”


Advance praise for THE FURTHER ADVENTURES OF NICK WILSON:

“Eddie Gorodetsky is the funniest man in the world. He is also one of the best friends to have in the world. He knows everything about, well everything, but especially music, comedy, and comics. He writes the most successful comedy on TV. Now, he’s written the best ex-superhero comic ever. If he learns to play sax, my life will be perfect. I love Eddie.” —Penn Jillette of Penn & Teller

“A funny, human comic about what it means to go from ‘super’ to ‘human.” —Patton Oswalt

“In the Nick Wilson stories Eddie Gorodetsky has created the superhero that we probably lurks within each of us; flawed beneath a thin disguise of skin and wrestling with a legend that was pressed upon us all.” —Elvis Costello

“I hate blurbing people's stupid f@%*king books but I love this comic book by Eddie Gorodetsky. If you love comic books you will for reals love this.” —Sarah Silverman

“Writer/creators Eddie Gorodetsky and Marc Andreyko have teamed with artist Stephen Sadowski to pose the question most caped crusaders never have to answer: ‘Now what?’ The world's first real super hero Nick Wilson was at the start of a glorious career which ended faster than a speeding bullet. Now not yet thirty, he has to face his uncertain future without powers, without the costume, and with very few options other than dealing with his non-super life one day at a time. The Further Adventures of Nick Wilson is a sometimes funny, always touching parable about the pitfalls of early success, cloaked in the tale of a one-time hero who believes his best days are behind him.” —Paul Dini

ABOUT EDDIE GORODETSKY
Eddie Gorodetsky is an Emmy-award winning writer producer who has written on Two and a Half Men, Batman: The Animated Series, and The Big Bang Theory and co-created the TV series Mom and the radio program Theme Time Radio Hour with Bob Dylan.

ABOUT MARC ANDREYKO
Marc Andreyko is a New York Times bestselling and Eisner winning writer of Manhunter, Wonder Woman '77, Harley and Ivy Meet Betty and Veronica (with Paul Dini), Torso (with Brian Bendis), The Illegitimates (with Taran Killam) and many more. Andreyko was also the organizer/curator of the best selling Love Is Love—an anthology that raised over $200,000 for victims of the Orlando Pulse Nightclub massacre—and he was the 2017 recipient of the prestigious Bob Clampett Humanitarian Award at the 2017 Eisner Awards. In his career, Andreyko has written for virtually every major comics publisher as well as for film and television. 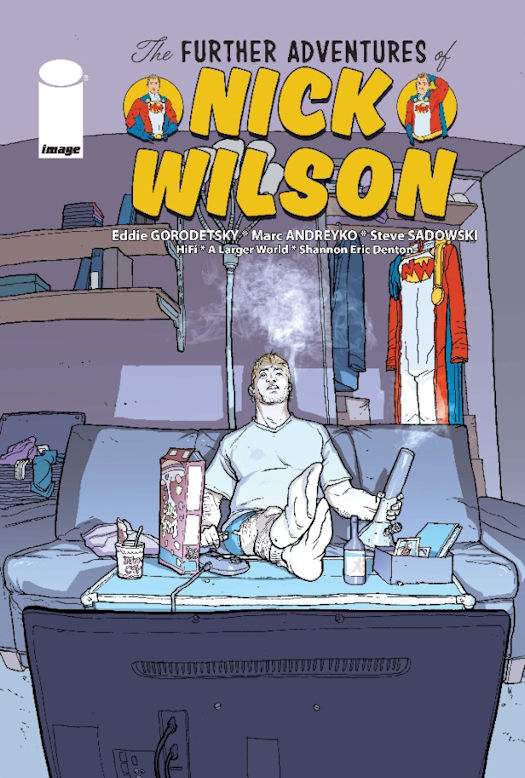 ABOUT IMAGE COMICS
Image Comics is a comic book and graphic novel publisher founded in 1992 by a collective of bestselling artists. Image has since gone on to become one of the largest comics publishers in the United States. Image currently has five partners: Robert Kirkman, Erik Larsen, Todd McFarlane, Marc Silvestri, and Jim Valentino. It consists of five major houses: Todd McFarlane Productions, Top Cow Productions, Shadowline Comics, Skybound Entertainment, and Image Central. Image publishes comics and graphic novels in nearly every genre, sub-genre, and style imaginable. It offers science fiction, fantasy, romance, horror, crime fiction, historical fiction, humor and more by the finest artists and writers working in the medium today. For more information, visit www.imagecomics.com.
Posted by Qwill at 8:53 AM