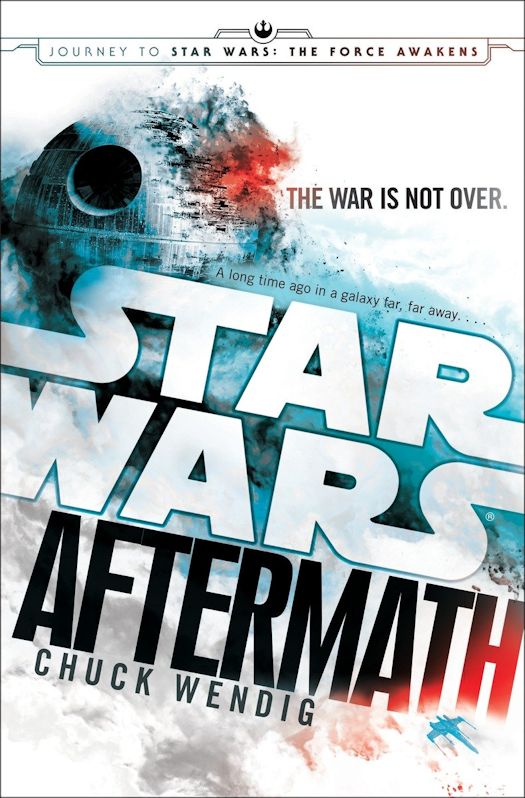 The second Death Star has been destroyed, the Emperor killed, and Darth Vader struck down. Devastating blows against the Empire, and major victories for the Rebel Alliance. But the battle for freedom is far from over.

Star Wars: Aftermath by Chuck Wendig blasts into a galaxy near you by reintroducing an old friend from the original trilogy, Captain Wedge Antilles. Members of the Galactic Empire are scrambling after the destruction of the Death Star and the deaths of the Emperor and Darth Vader. As the New Republic works to eradicate the Empire's iron grip planet by planet, Wedge feels compelled to scout the Outer Rim for Imperial strongholds. Above the planet Akiva, he stumbles upon a covert meeting of high level Imperial personnel and is able to send a local distress call before being taken prisoner. The call is received by returning war hero, native Norra Wexley, who has just reunited with her teenage son Temmin after spending three years off-planet, fighting for the rebel alliance. The fortunes of Norra and Temmin become intertwined with those of bounty hunter Jas Emari and ex-Imperial officer Sinjir Rath Velus. They form an unlikely team as they try to avoid capture, free Wedge, and thwart the Imperial's plans.

I've loved all things Star Wars since I saw the first movie back in the summer of '77. I think it's pertinent to note that I've read many of the books that comprise the Star Wars Expanded Universe and became invested in many of those characters. That being said, the fact that Disney has opted to go in a different direction made no difference to my enjoyment of this book. I was completely caught up as each event unfolded and was rooting for the story's unconventional set of heroes from the get-go. I usually despise Imperials, but I surprised myself by choosing the ex-Imperial as my favorite character. Sinjir plans on drinking himself into oblivion, but being in the wrong place at the wrong time changes everything. His quick wit and snide mannerisms completely won me over. I felt less empathy for Norra and her son, Temmin. I suppose I am worn out by angsty teens with chips on their shoulders and their guilt-ridden parents, but luckily Temmin and his mom turned out to be much more than that. Temmin's a survivor and a brilliant tech wizard. His reworked battle droid, Mister Bones, instantly earned a spot on my "favorite droid ever" list. Norra is brave and courageous in the face of everything that is thrown at her and if she sometimes seems just a bit too brave and too courageous, well, I can overlook that. Rounding out the roster is Jas Emari, the Zabrak bounty hunter whose unique code of ethics makes her strangely appealing. It's a nice change of pace to have such a well-rounded cast of characters.

I also enjoyed the glimpses into the crumbling world of the loyal Imperials. Their squabbling, power plays, and self-serving attitudes seemed on point. Wendig does a great job of fleshing out their motivations which allows the reader insight into perspectives rarely revealed.

My only peeve; Wendig's writing style of repeating short sentence sequences would from time to time distract me from the story.

Aftermath is everything the Star Wars universe deserves: an exhilarating, epic adventure that introduces new characters and reintroduces some old friends. It sets the stage for the highly anticipated movie, The Force Awakens, and I wholeheartedly recommend it to lovers of the Star Wars saga of any age.