Please welcome Christie Meierz to The Qwillery with an excerpt from Farryn's War which will be published on September 22, 2015. 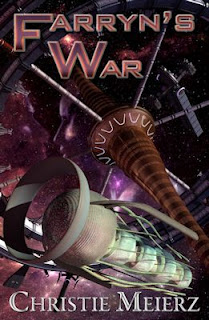 The business class nightclub piped Neapolitan piano jazz over the comms. A few brave souls clustered under an antique disco ball, attempting to dance to the irregular, shifting beat. Adeline, in uniform because she’d had nothing else in her go-kit, wove her way through the chairs and tables around the dance floor, conversations stilling in her wake, her eyes on the bar at the back of the club. It had been a very long day sifting through data from the Far India office.

A lean man with eyes like jade and hair that might have once been auburn stood behind the counter, racking wine glasses. He looked her up and down with raised eyebrows, clearly surprised to serve someone in gray. “What’ll it be?”

Was that a touch of New York in his voice?

“Scotch, neat.” She scooted onto a barstool. “Britannic, if you have it. Make it a double.”

He eyed her as one hand reached unerringly for a bottle on the rack behind him. “That’s a man’s drink.”

“I do a man’s work. You have a problem with that?”

He turned to pour the drink before she could determine if his twitching lips meant he was trying to stifle a chuckle. The back he presented was… broad-shouldered, and narrow-hipped, and might have been muscular, under the loose ship’s jumpsuit. Nice. His face smooth once more, he laid a paper coaster—real paper, not plastin-paper—on the counter in front of her and placed a squat, hexagonal tumbler of scotch on it.

“Must be a VIP aboard.” She fingered the coaster.

He smirked and began to wipe down the bar top, starting at her end. “You mean you don’t know?”

“I booked this passage fifteen minutes before it left.”

“So you’re the one who delayed us.”

She lifted the scotch to eye level and peered at him through the gently sloshing liquid. “A whole minute. Whatever will you do?”

This time he did chuckle. “Pitch you out the nearest airlock. And it was three minutes.”

“We’ll be scrambling to catch up for weeks.”

“I suppose our reputation for punctuality will have to make way for the good of society. What brings you aboard the good ship Cormorant? Pursuing a dangerous fugitive or some such?”

He offered a hand. She shook it.

“Only from suicidal bartenders.”

A waiter interrupted them with a drink order. While Kieran busied himself with bottles, shakers, and ice, Adeline sipped at the scotch. The flavor—

“This isn’t Britannic,” she said.

Kieran cleaned his work area after the waiter shouldered the tray of drinks and left. “Nope.” He turned the bottle, briefly, to reveal a yellowed and worn label from an ancient distillery in Scotland.
She whistled. “I need to look up that VIP.”

“Just a spoiled Ahmadiyya aristocrat who didn’t want Daddy to know he’d been drinking, too rich to care what he left behind.”

“Convenient. So why serve it to me? People in my profession aren’t exactly popular.”

“I wondered what a nice girl like you was doing in that uniform.”

She savored another mouthful of the vintage scotch. “That’s a dangerous assumption to make.” 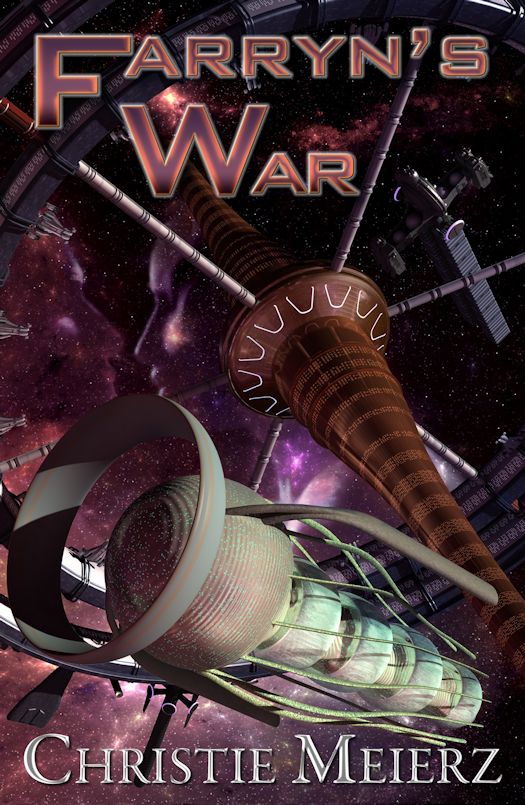 A novel of love, vengeance, and a world re-opened to the stars.

The empathic Tolari of the Beta Hydri system shunned space travel for thousands of years. Farryn of Monralar tried to shake his people from their isolation—tried and failed, losing his honor in the process. Now an exile, he puts his past behind him by building his own criminal empire among the colonies of Earth.

Only his estranged lover Sharana—scholar, political analyst, and one of the most powerful empathic sensitives on Tolar—dares to follow him into human space, desperate to find out what has become of him, hopeful of convincing him that she never betrayed him.

Unfortunately, Earth Central Security is watching, and Sharana has no idea what she is getting herself into.


Space opera/science fiction romance fans! Don't miss the virtual release party for FARRYN'S WAR, the first in a new series by award-winning author Christie Meierz! Not only will you hear about Christie's new book about love, vengeance, and a world reopened to the stars, but you'll hear from popular speculative fiction guests like Charles E. Gannon, Elizabeth Vaughan, Jennifer Brozek, Lawrence M. Schoen, and more, all from the comfort of Facebook! Come chat with authors and have a chance to get free books and other gifts. September 24, from 8-10 PM EDT https://www.facebook.com/events/858429277544545/ 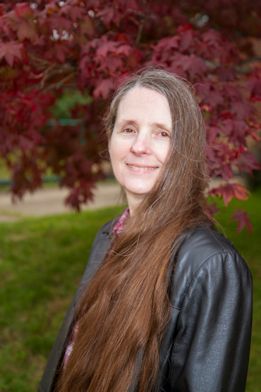 Award-winning author Christie Meierz writes space opera and science fiction romance set in a civilization of empaths on the edge of a dystopic Earth empire. Her published works include her bestselling debut novel, The Marann, its sequels, and two prequel short stories published in Into Tolari Space ~ The First Contact Stories. Her forthcoming novel, Farryn’s War, will come out on September 22, 2015.

Christie has spent a night and/or eaten a meal in all 50 U.S. states, plus Puerto Rico and the U.S. Virgin Islands. Currently, she lives in Pittsburgh, Pennsylvania with her mathematician husband and an assortment of stuffies. When she’s not writing, she writes about writing on her blog, Meierz Musings (christiemeierz.com/blog), and Facebook (facebook/christie.meierz and facebook/tolarispace), where she welcomes comments and friend requests.