Please welcome Michael Pogach to The Qwillery. The Spider in the Laurel was published on September 21st by Ragnarok Publications. 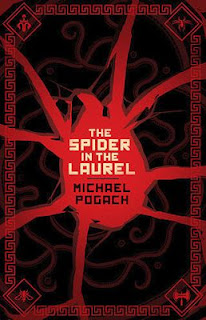 There are certain scenes in books that you always remember. Epic battles. Beautiful moments of prose. Plot twists that punch you in the kidney. I remember deaths. Maybe it’s all the obsession recently over the frequent deaths George R.R. Martin engineers that got me thinking back to my favorite death scenes. Maybe I just need a therapist. Whatever the case, here are five characters’ deaths that have stuck with me over the years.

1) Sturm Brightblade. Dragons of Winter Night. Dragonlance Chronicles: Volume 2, by Margaret Weiss & Tracy Hickman.
Poor Sturm. He was the one character you really wanted to see just have a drink and relax. Somewhere under all that armor lurked the life of the party. But all he could see was the Code and the Measure. His is the perfect death for the angsty teen to read over and over, dropping tears each time. Because, let’s face it, he and Raistlin were the angsty teens of the group – tormented loners who were going to do things their way no matter what – and you just knew Raistlin wasn’t going to be killed off.

Sturm dies following his stubborn Code. He dies alone. He saves the day. He’s the James Dean of the Dragonlance series. And it’s just gut-wrenching when you read the final line of Chapter 13: “Sturm’s sun shattered.”

2) Robert Neville. I am Legend, by Richard Matheson.
Will Smith’s death, as Robert Neville, isn’t bad. But the movie completely redefines the novel’s title, making it a claim of heroism rather than the horror of self-discovery. In the novel, Neville comes to the startling realization that, as the last human in a world of vampires, he is the boogey man. We’ve spent 120 or so pages rooting for him against the undead apocalypse, only to be forced to accept the law of numbers. As Neville recognizes, “I am the abnormal one now. Normalcy was a majority concept, the standard of many and not the standard of just one man.” His daily hunts to exterminate the vampires, who have built their own nocturnal society, equates him with the worst serial killers in history.

When Robert Neville says, “I am legend” at the end, he is condemning himself to become the terrors that go bump in the daylight. He is the monster, not them. And that, my friends, is as sad as it is disturbing.

3) Arthur. The Mists of Avalon, by Marion Zimmer Bradley.
We all know the story of King Arthur. It’s been done, and done again. But Bradley really gives us something unique in The Mists of Avalon. She tells the story from the points of view of the women who never really get their say in other Arthurian retellings.

As expected, Arthur engages Mordred in the final battle and is mortally wounded. In the stillness of the aftermath, Morgaine comforts him. “Take me to Avalon, where you can heal me of this wound,” he says. Such futile hope. Arthur dies. We know it. She knows it. Only he is naïve enough to think there’s a tomorrow. And in the end, “he died, just as the mists rose and the sun shone full over the shores of Avalon.”

I hope I can write a character’s final line like that one day.

4) V. V for Vendetta, by Alan Moore.
He’s a terrorist. An anarchist. An all-around bad dude. But you have to like V, don’t you? Okay, to start, yes this is a graphic novel. But it’s my article, and I make the rules. So graphic novels get the thumbs up. And I just dig V.

His is probably the least cry-worthy on this list. But I had a friend a long time ago who told me she couldn’t help a few tears every time she reread V’s death scene. V insists he is an idea, and that he can’t be killed because “ideas are bulletproof.” He’s wrong about not being killed, of course. But he’s also correct, as Evey puts on the Guy Fawkes costume and incites the rebellion. In this way, I think, V’s death is quite similar to Sturm’s. It’s his inspiration that scores the final victory, though he isn’t there to see it. Yes, he’s still a terrorist, anarchist, and all-around bad dude. But every now and then, don’t you want to put on that mask and go show the government what you think of them?

5) Roland Deschain. The Dark Tower. The Dark Tower VII, by Stephen King.
Yeah, yeah. He doesn’t die. Spare me your arguments. The man dies. He is forced through the final door by the hands of Gan and ka and the Dark Tower itself. Across that threshold he ceases to exist as the man with whom we’ve traveled through seven novels. He is reborn as himself all those years and pages ago, ignorant of all that has transpired. Reincarnation. Transmigration. Whatever. Roland Deschain dies. My list. My rules. He dies.

But just in case you’re not buying it yet, let me offer this. Roland’s story opens and closes with these words: “The man in black fled across the desert, and the gunslinger followed.” Now, I ask you, what is the man in black but death? What has Roland been chasing all this time but his own demise?

Agree with me or not, Roland’s end in Book VII left me stunned. King couldn’t be that cruel, could he? The truth is, life is that cruel. And Roland’s end is both the dream and the nightmare of death. For, we all want another chance. But how many of us would be horrified to discover that the moment of death simply delivers us, again and again, right back to where we started? Knowing that, how many of us would opt for oblivion? 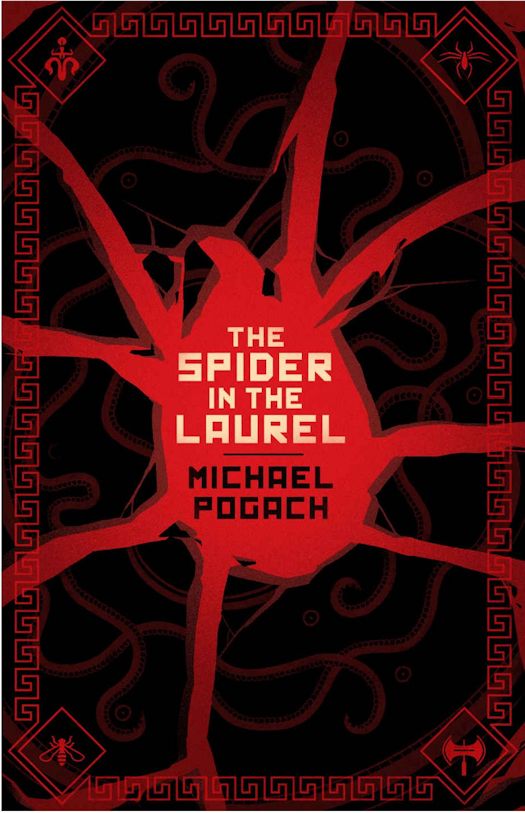 In the Citizen's Republic of America, religion is outlawed. Professor Rafael Ward is an everyman capable of the kinds of decisions most everymen cannot stomach, and he has been tasked by Relic Enforcement Command with destroying the very artifacts he cherishes. It will take the uncompromising faith of an outlaw as an ally, and the acceptance of his guilt for his mother’s death, to help Ward break free of the government’s yoke. If he’s lucky, he might also prevent an apocalyptic future for which his secular world is completely unprepared.

The Spider in the Laurel questions the methods of both governmental authority and those attempting to subvert the status quo. It presents two unique visions: a new, never-before-heard fairy tale; and an alternate take on the concept of creation from Genesis and other narratives based on ancient and Dark Age mythologies. It straddles the line between simple adventure and the type of novel that can force a reader to question their beliefs. 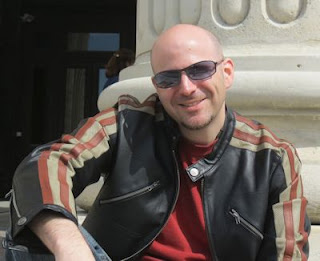 Michael Pogach began writing stories in grade school. He doesn’t remember these early masterpieces, but his parents tell him everyone in them died. He’s gained some humanity since then, even occasionally allowing characters to escape his stories alive. Michael lives in suburban Philadelphia with his wife and daughter. The Spider in the Laurel is his first novel.

Labels: Guest Blog, Michael Pogach, Ragnarok Publications, The Spider in the Laurel
Email ThisBlogThis!Share to TwitterShare to FacebookShare to Pinterest