Please welcome Paul Cornell to The Qwillery. Witches of Lychford was published on September 8th by Tor.com. 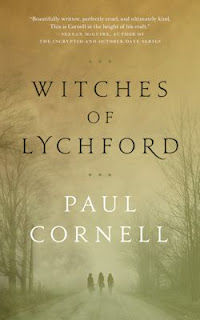 TQ:  Welcome to The Qwillery. You've written many Doctor Who novels, novels in your own series (e.g. the London Falling series), comics, short fiction, and screenplays. How has your writing process changed from when your first novel was published until now and how does writing for other mediums affect your novel and novella writing?

Paul:  I'm now much more organised, having to divide time between work and family life. I think writing for comics and television is actually very good for one's prose. Every medium is about doing the biggest thing in the smallest space, and those media really ask one to focus. Now when I go off on a big subjective trip in prose I know it's for a good reason, and I try otherwise to be pow pow pow. Mind you, it's good to still have that ability to dig deep with description.

Paul:  Errr, panster? I don't know what that means! I do like to write a very detailed plot first, and then I tend to wander off from it, and correct it as I go. Plotting is the hardest bit of anything, but oh, the joy if I've gotten the ending first! That's like swimming toward shore!

TQ:  Witches of Lychford is contemporary fantasy. What appeals to you about writing in this genre?

Paul:  I get to talk about the real world while flinging around dirty great metaphors. It lets my anger out. Also, I get to make the audience laugh.

TQ:  Please tell us something about Witches of Lychford that is not found in the novella description.

Paul:  It's all about friendship and how terrible losing a friend feels. There's comedy but actually real horror too.

TQ:  Is Lychford based on a real village?

Paul:  It's rather like the town of Fairford, or several small places in the Cotswolds.

Paul:  One of my three 'witches' is Autumn, an atheist sceptic who gets a lot of funny lines, so she's easy to write. Another one, Judith is a pensioner, so that's me looking way ahead for myself in a rather uncomfortable way.

TQ:  Which question about Witches of Lychford do you wish someone would ask? Ask it and answer it!

Paul:  Is one of the 'witches' based on my wife? Yes, kind of, but my wife, thankfully, isn't suffering a bereavement.

Paul:  The third book in my Shadow Police urban fantasy series comes out next June from Tor. 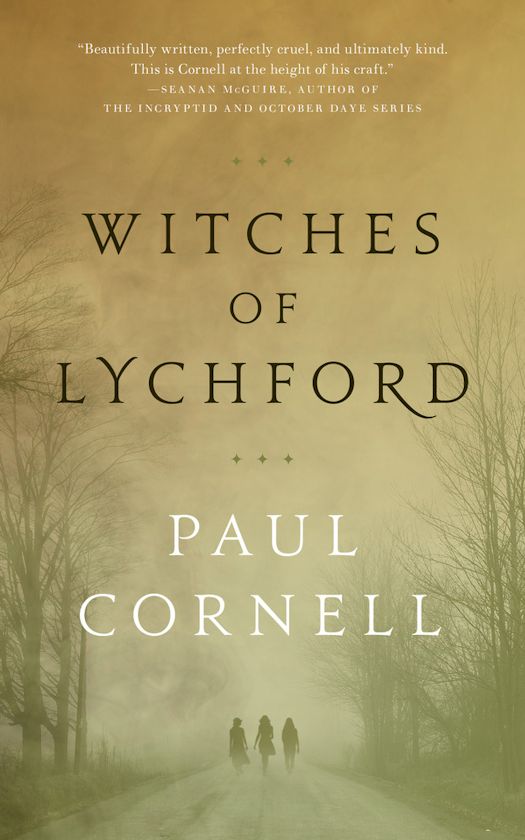 The villagers in the sleepy hamlet of Lychford are divided. A supermarket wants to build a major branch on their border. Some welcome the employment opportunities, while some object to the modernization of the local environment.

Judith Mawson (local crank) knows the truth -- that Lychford lies on the boundary between two worlds, and that the destruction of the border will open wide the gateways to malevolent beings beyond imagination.

But if she is to have her voice heard, she's going to need the assistance of some unlikely allies...

Paul Cornell started out writing Doctor Who fan fiction, went on to write Doctor Who novels, audio plays and comics, and, having won a BBC contest to get a play on TV, and worked his way up through shows like Casualty and Holby City, became the fan who got to write for the show itself.

He went on to work on other TV series like Robin Hood and Primeval, to write two seasons of his own CITV show, Wavelength, and to break into comics, writing for Marvel, DC and 2000AD on such titles as Captain Britain and MI-13, Young Avengers, Wolverine, Knight and Squire, Batman and Robin, Action Comics, Demon Knights, XTNCT and Pan-African Judges. He created Saucer Country for Vertigo, and has new creator-owned projects in the pipeline.

In the meantime, he’d also achieved his ambition to become a novelist, first having two SF novels, Something More and British Summertime, published by Gollancz, then starting the Shadow Police series with London Falling and The Severed Streets at Tor.

His short fiction, often featuring the character of Jonathan Hamilton, an out-of-uniform soldier in a parallel world where the ‘great game’ of European espionage continues into space, has been published in Isaac Asimov’s Science Fiction Magazine, Interzone, The Daily Telegraph, The Times and at Tor.com. He’s also written twice for George R.R. Martin’s Wild Cards short story anthologies.

He’s the creator of Bernice Summerfield, a Doctor Who companion from the novels who for twenty years now has had her own spinoff line of books and audio plays.

He lives in Gloucestershire with his wife, a priest in the Church of England, and their toddler son, Thomas. His interests include cricket, matters Fortean and Kate Bush.