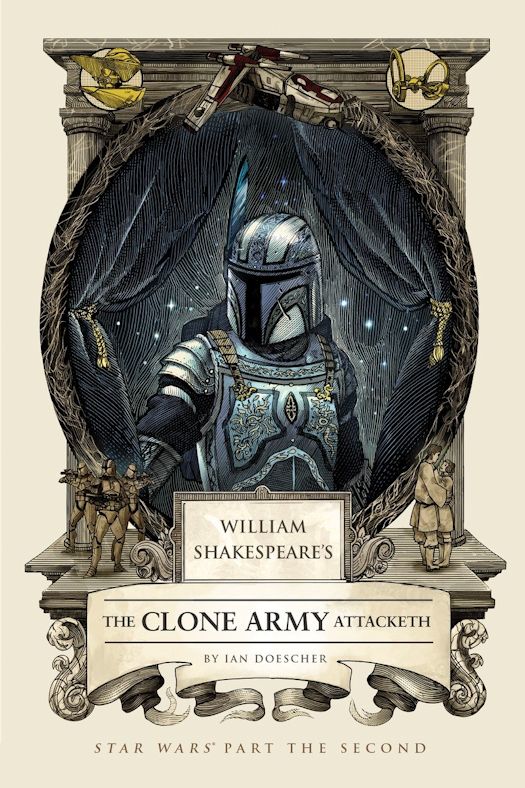 In time so long ago begins our play,
In clash-strewn galaxy far, far away.

To Shmi or not to Shmi? Torn between duty to the Jedi, attraction to Padmé, and concern for his beloved mother, yeoman Jedi Anakin Skywalker struggles to be master of his fate. The path he chooses will determine not just his own destiny, but that of the entire Republic. And thereby hangs a tale.

Alack the day! A noble lady in danger. A knight and squire in battle. And a forbidden love that’s written in the stars. Once again, the quill of William Shakespeare meets the galaxy of George Lucas in an insightful reimagining that sets the Star Wars saga on the Elizabethan stage. The characters are familiar, but the masterful meter, insightful soliloquies, and period illustrations will convince you that the Bard himself penned this epic adventure.

In a galaxy far, far away, Padawan learner, Anakin Skywalker plays the part of Romeo to the fair Senator Padmé Amidala's Juliet. Their forbidden love slowly blossoms amid assassination attempts and ill-fated rescue missions. Obi-Wan Kenobi is sent to the mysterious planet of Kamino where he discovers an army of clones commissioned by the Jedi and encounters Jango and Boba Fett. William Shakespeare's The Clone Army Attacketh is the second installment in the Star Wars prequel trilogy.

At this point in my review, I think I should insert a personal disclaimer: I love all things Star Wars with the exception of the prequels. However, author Ian Doescher does a fantastic job of making me rethink my stance. I have never been a fan of the romance between Anakin and Padmé and that hasn't changed. Yet, I did enjoy Doescher's spin; painting the tragic couple as Romeo and Juliet actually gave their love scenes a sense of grandeur and sacrifice that I felt was missing from the film version. Doescher adds new material in the form of asides and soliloquies that readers should pay special attention to as they never fail to delight. In my opinion, the coolest part of the book was Yoda's kick ass battle scene with Count Dooku. Although the results are the same, it adds so much to the sequence to be allowed the insight of both combatants' thoughts.

With still a few months left in 2015, I am voting The Clone Army Attacketh's cover as my favorite of the year. Nicholas Delort's delightful artwork featuring the nefarious Jango Fett is absolutely stunning. 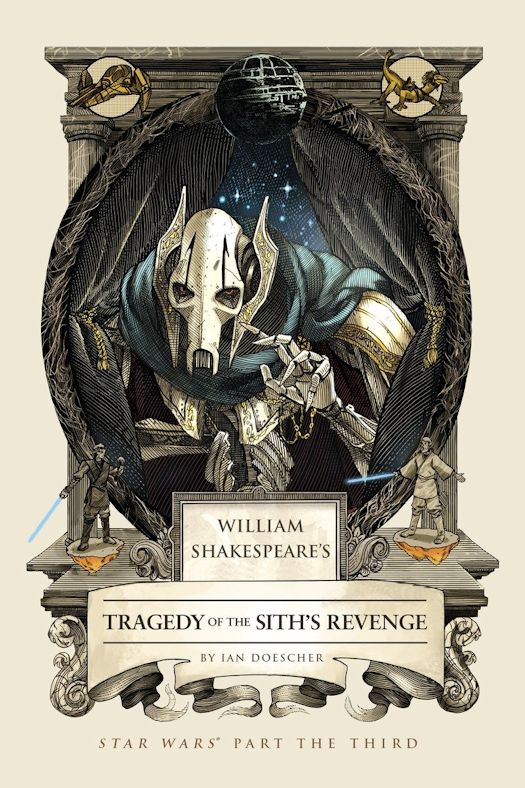 The curtain rises once again on that star-crossed galaxy far, faraway—this time, to chronicle a once-heroic knight’s transformation into the darkest of villains. William Shakespeare’s Tragedy of the Sith’s Revenge is the climactic conclusion to the fall of the house of Skywalker, a collaboration between William Shakespeare and George Lucas that’s filled with masterful meter, stirring soliloquies, inside jokes, and intricate Elizabethan illustrations. You’ll fall in love with Star Wars—and Shakespeare—all over again. At the same time!

Grab a cold glass of blue bantha milk and snuggle up with your favorite Wookie for the thrilling conclusion to Ian Doescher's delightful, must-read series, William Shakespeare's Tragedy of the Sith's Revenge. True to its source material, it's the tale of an impressionable young Jedi corrupted by the diabolical machinations of a master Sith. Anakin Skywalker's spiral to the Dark Side of the Force by the malevolent orchestrations of the diabolical Chancellor Palpatine is heartrending. Doescher's version serves to emphasize the Sith's corrupt and violence-ridden brand of evil more than the movie ever could. Another key element to this tragic tale is that Doescher was able to poignantly articulate Padmé's and Obi-Wan's despair and loss at Anakin's transformation.

What's so great about this book and its predecessors is that the reader is allowed insight into situations and characters that can actually change perceptions, or deepen emotional attachments. Doescher's pairing of Shakespeare and Lucas continues to captivate and entertain. Tragedy of the Sith's Revenge, along with the rest of the series is seriously clever, and truly a bright star in the galaxy of mash-ups. I recommend it wholeheartedly to Star Wars fans, Shakespeare fans, educators looking for a way to hook their students, and also art lovers. Art lovers? Yes, because Nicolas Delort's illustrations and covers are amazing.

Honestly, I'm hoping that someone makes these into actual plays because I'll be the first in line screaming "Take my money!"
Posted by Qwill at 1:59 PM