Please welcome David Annandale to The Qwillery! David's most recent novel in Yarrick: The Pyres of Armageddon from Games Workshop / Black Library. 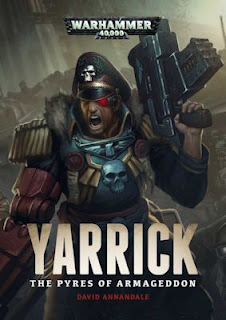 David:  I made my first attempt at a story when I was six. It was about a monster named Zaradak I saw in a French translation of an Adam Strange comic. I didn't get more than a few sentences in, but there we go -- monsters in space from the very beginning. For as long as I can remember, I have wanted to tell stories.

David:  I started off as a pantser, and was for my first four novel-length works. Three of those are (thankfully) trunk novels. The fourth became my first published book, the thriller Crown Fire. After it was accepted, over the course of the editing process it lost a third of its length -- some 50,000 words, and they certainly needed to be trimmed. Thereafter, I started outlining, and the difference that made for me was extraordinary. My prior anxiety (that outlining would hem me in creatively) turned out to be utterly unfounded, I was almost never blocked any longer, the books were tighter, and the editing process much, much, much faster and easier. I was, as they say, Converted. The most challenging thing, I think, remains the day-to-day process of getting the words out and onto the screen.

TQ:  You teach courses on film, games, literature, and creative writing. How does this affect (or not) your own writing?

David:  I think there is a feedback loop between all of these. Teaching creative writing forces me to pay closer attention to what I'm doing, and the more experience I get in the writing and publishing game, the more I can I can bring to the classroom that is (I hope) useful to the students. Meanwhile, the courses on literature, movies and video games engage a different side of creativity, which is energizing. And the academic part of my life certainly influences the writing part. The way I write horror is influenced by my study of it (naturally enough), and my formulation of how horror works springs from the work of Gilles Deleuze and Félix Guattari. Carol Clover had a profound impact on the way I look at horror movies, and that filters back into the creative work as well. I find Julia Kristeva's concept of the abject very helpful in thinking about the dimension of the warp in the 40K universe. More recently, I've been reading a fair bit of Alain Badiou, and his conception of the Event has influenced my thinking on Gethsemane Hall and its follow-ups. And while there is much that I disagree with in Terry Eagleton's On Evil, working through the ideas in the book had an impact on The Death of Antagonis.

David:  Commissar Yarrick fights to save the world of Armageddon from the overwhelming ork invasion led by Ghaghkull Thraka.

TQ:  How difficult or easy is it to write in an established canon, in this case the Warhammer 40,000 world? How many Warhammer novels have you written?

David:  I'm just wrapping up my tenth novel in the Warhammer 40,000 and Horus Heresy lines. I've also written five novellas and about 20 short stories in that setting. In general terms, I find the canon an exciting path to storytelling. It's the difference between playing in an empty sandbox and one full of toys. I see the canon not as a set of restrictions but as the tools I get to work with. Also, the universe is so vast the degree of lore associated with a given character or event varies enormously. In the case of Commissar Yarrick, for example, I've written about him during two stages of his life. Imperial Creed chronicles his first mission, and there is virtually nothing in the canon about his early life, so I had close to a blank slate to play with there. On the other hand, The Pyres of Armageddon and the novella Chains of Golgotha recount events during and after the Second War of Armageddon, and there is a LOT of canon about that period.So there was plenty of research to be done to make sure I didn't miss any important events, and what that provide me with a pretty strong sense of the story before I even sat down to outline it.

TQ:  Tell us something about Pyres of Armageddon that is not found in the book description.

David:  One of the main supporting characters is Canoness Setheno of the Sisters of Battle. She has previously appeared in The Death of Antagonis and Imperial Creed, and the reception she's received from readers has made me very, very happy.

TQ:  What sort of research did you do for Pyres of Armageddon?

David:  The research here was probably the most involved of any of my Black Library projects. There are so many descriptions of one aspect or the other of the Second War of Armageddon, some of them in back issues of White Dwarf or in the rules of older games like Battle for Armageddon. My editor, Nick Kyme, and Graeme Lyon of Black Library sent me all of this material, and I went through it, putting everything into a single timeline for myself and going back and forth with Nick and Graeme to make sure I had the details right.

David:  Yarrick is a character I feel I've come to know very well over the years, so it's always a pleasure to get back into writing his voice. And that voice is, for whatever reason, one I've heard clearly in my head since the first short story I wrote about him ("Evil Eye"). One of the joys about writing Yarrick's adventures is I also get to write about Ghazghkull Thraka. I find the Batman-Joker/Ahab-Moby-Dick obsessive relationship between the two enemies absolutely fascinating. Ghazghkull has to be handled carefully, though, and what I tried to do in The Pyres of Armageddon is make his presence and his character felt even though he's only ever briefly glimpsed in the background. That may have been the trickiest bit.

TQ:  Which question about Pyres of Armageddon do you wish someone would ask? Ask it and answer it!

David:  Does the book have a recommended soundtrack?

Why yes! Yes it does! I often find certain songs or albums become associated with a given book. So Keep of Kalessin's "The Awakening" became, for me, the sound of Mephiston: Lord of Death (indeed, it was while listening to that song that I came up with the core idea of that book). I listen to a lot of Sabaton while writing Black Library books, and their "Ruina Imperii" embodies what I hoped to conjure for the reader in The Damnation of Pythos. But I heard my first Sabaton song on the day I wrote about Yarrick for the first time, so I closely associate the two. "Ghost Division" and "The Art of War" are what I hear in my head when I think about Yarrick, so they're in the DNA of The Pyres of Armageddon. As well, I was listening to Judas Priest's Redeemer of Souls a lot when I began work on the book, and the songs "Sword of Damocles" and "Battle Cry" from that album would be a bit part of my imaginary soundtrack for the novel.

TQ:  Give us one or two of your favorite non-spoilery lines from Pyres of Armageddon.

"From the distant west came a still-greater thunder. Then night rose to the clouds, and reached out for us."

David:  I'm hard at work on a number of other Black Library books, all of which I must keep under the cone of silence for now (but I'm playing a lot of Juno Reactor as I write). I'm also busy writing the sequel to my horror novel Gethsemane Hall. And I'm involved in a very fun cryptid project conceived by Josh Reynolds, which is going to be a blast to write.

David:  Thanks for having me! 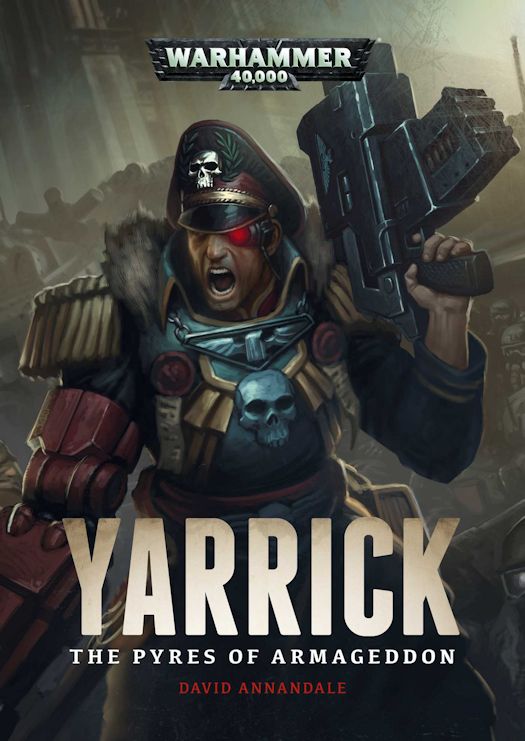 The thrilling exploits of one of Black Library's most iconic characters

Commissar Sebastian Yarrick returns to action to defend the world of Armageddon. When the largest ork horde seen for centuries hits the hive world, the Imperial forces are faced with an overwhelming attack. As battle rages across the planet, Yarrick and his allies lead the defence, striking at the orks in a series of daring assaults. Even if it means incurring the wrath of Armageddon’s corrupt Overlord, Commissar Yarrick will not let Armageddon fall. 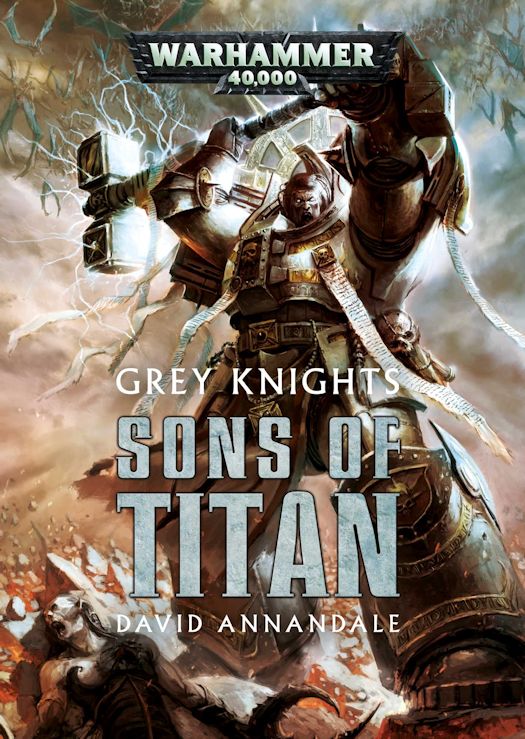 The Grey Knights are a myth, a secret Chapter of Space Marines that responds to the greatest of threats: daemonic incursions into the Emperor’s realm. They are spoken of in legends, silver-armoured heroes whose weapons blaze with holy fire and whose merest touch can destroy the servants of the Ruinous Powers. And the legends are true. In this collection of stories, a squad of Grey Knights commanded by Justicar Styre battle the infernal followers of the Plague God across the Imperium. 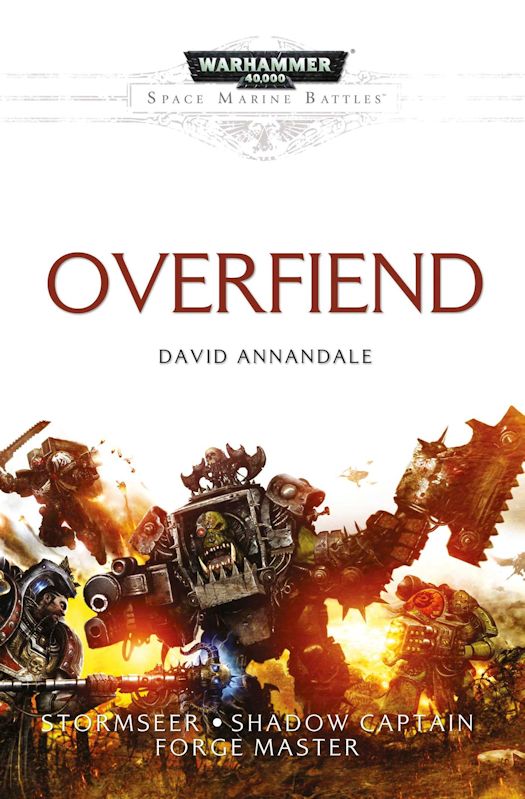 The latest title in the premium Warhammer 40,000 series

For many long years, the ork warlord known as the Overfiend of Octarius has bedevilled the Imperium, ruling his alien empire in the heart of the Emperor’s realm. Now, at last, three Chapters of Space Marines come together to destroy the greenskin menace and restore Imperial rule. The Salamanders, White Scars and Raven Guard, together with their allies from the Astra Militarum and bolstered by the aid of the mercurial alien eldar, fall upon the worlds of Octarius system with chainsword and bolter, bringing death to the orks. 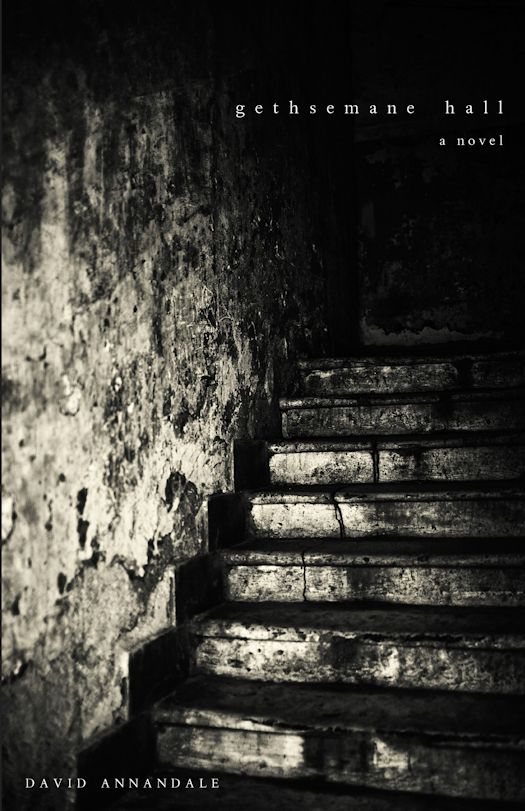 Sometimes the truth will make you bleed.

The skeptics think they know what’s going on at Gethsemane Hall. So do the religious. So do the spiritualists. They’re all wrong. Richard Gray, grieving over the loss of his wife and daughter, learns that his ancestral home holds the secret of what lies beyond the grave. And all of a sudden, everybody wants a piece of Gethsemane Hall. 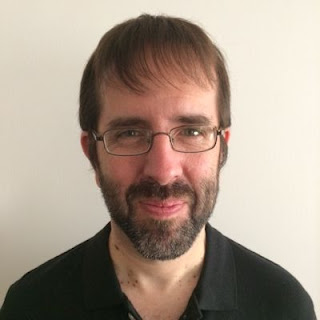 David Annandale writes Horus Heresy and Warhammer 40,000 fiction for the Black Library, most recently The Damnation of Pythos and Yarrick: The Pyres of Armageddon. He is also the author of the horror novel Gethsemane Hall and the Jen Blaylock thriller series. He teaches English literature and film at the University of Manitoba, and is a co-host of the Skiffy and Fanty Show and Totally Pretentious podcasts. Find him at www.davidannandale.com and on Twitter at @David_Annandale.