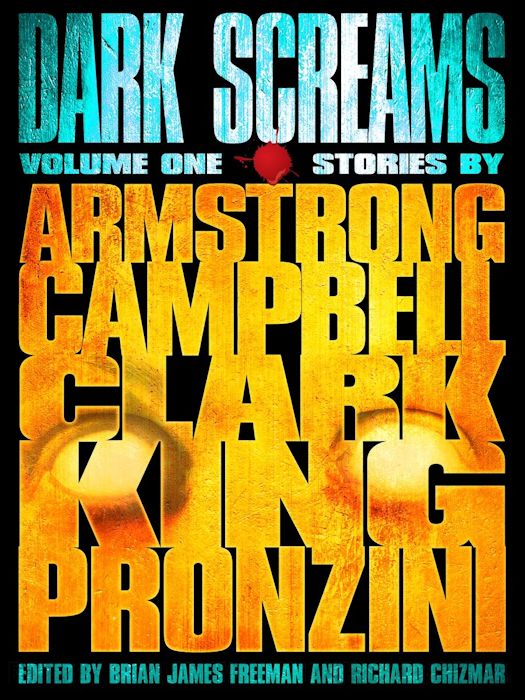 Stephen King, Kelley Armstrong, Bill Pronzini, Simon Clark, and Ramsey Campbell are the first contributors to a mind-bending new series of short-story collections that push the boundaries of horror and dark suspense to the bleeding edge. From Brian James Freeman and Richard Chizmar of the acclaimed Cemetery Dance Publications, Dark Screams: Volume One reaches across genres to take readers beyond the precipice of mortal toil and into the glimmering void of irreality and beyond.

WEEDS by Stephen King
When a meteorite lands on his property, Jordy Verrill envisions an easy payday. Unfortunately for Jordy, this is no ordinary rock—and the uncompromising force inside has found its first target.

THE PRICE YOU PAY by Kelley Armstrong
Never pay more than you owe. Sounds like easy advice to follow. But for Kara and her childhood friend Ingrid, some debts can never be repaid . . . especially those tendered in blood.

MAGIC EYES by Bill Pronzini
Edward James Tolliver has found a weary sort of asylum among the insane. He knows he’s not one of them—but how can he tell anyone about the invaders without sounding that way?

MURDER IN CHAINS by Simon Clark
Imagine awaking to find yourself in an underground vault, chained by the neck to a murderous lunatic, a grunting goliath who seems more animal than man. What would you do to save yourself?

THE WATCHED by Ramsey Campbell
Little Jimmy gets a glimpse of the cold truth when he finds out that it’s not always what you see that can get you into trouble; it’s who knows what you see.

Dark Screams: Volume One is a group of short horror stories from some of the best horror authors in the industry. All of these tales had some type of twist in their endings that made a reader think.

Stephen King’s “Weeds” seemed similar to some of his other short stories in other anthologies. In it, a slow-witted man has a dangerous meteorite land on his property, and while he hopes to sell the stone, the secret inside has another plan. Kelley Armstrong’s “The Price You Pay” was somewhat more satisfying. In it, two best friends suffered during their childhood together and face a new terror in their early adulthood. I thought this story was probably the best of the bunch, mostly because I did not see the end coming.

Bill Pronzini was a new author for me, but his “Magic Eyes” seemed somewhat stale. I saw the end coming from a mile away. A murderer incarcerated in an insane asylum tries to tell his side of the story. “Murder in Chains” by Simon Clark was probably the most different of the five tales, with its protagonist waking up chained to a murderous lunatic. Unfortunately, there seemed to be no way out for anyone in the story.

Lastly, Ramsey Campbell told a ghost story in “The Watched.” This was my second favorite story, with an ominous atmosphere and a child in danger.

Overall, there was nothing really new in these stories – I quickly read them in an afternoon. Only Armstrong and Campbell really gave me chills.