Interview with Mitchell Hogan, author of A Crucible of Souls


Please welcome Mitchell Hogan to The Qwillery as part of the 2015 Debut Author Challenge Interviews. A Crucible of Souls was published on September 22nd by Harper Voyager. 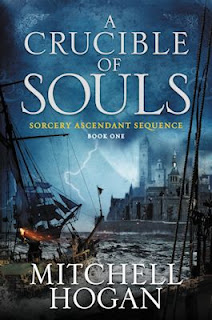 Mitchell:  Reading is a passion of mine and I kept coming up with characters and scenes I thought would be interesting, so one day I decided to try my hand at writing. I started around twelve years ago, and it took me ten years to finish my first book (A Crucible of Souls) due to work and life etc! In the end I resigned from my job to concentrate on finishing it, otherwise I’d regret not having done so, and I’m glad I did. My dream wasn’t to be published, only to finish the book I wanted to write.

Mitchell:  I am a pantser for the first book in a series, then somewhere in between for each subsequent book. Once the first book is finished quite a bit is already plotted out based on what happened in the first book, and what has to happen because of it. Sometimes I wish I plotted more, but I love it when my characters take me to places I’d never thought of.

Mitchell:  I find it hard to get started when I have the time, and I need a block of a few hours if I’m going to get a satisfying amount of writing done. Sometimes I get stuck (since I’m mostly a pantser), and I can agonize over a scene for way too long and lose a lot of time that could have been spent making progress on another scene.

Mitchell:  I think the authors I read as a teenager and when I was in my twenties have influenced me the most. These days I’m a lot pickier and I read far less than I used to (bad, I know!) Because I’m a fantasy author many of my favorite authors will be obvious: George RR Martin, Patrick Rothfuss, Joe Abercrombie, Robin Hobb, Glenn Cook, David Gemmel, R Scott Bakker… there are too many to mention!

TQ:  Describe A Crucible of Souls in 140 characters or less.

Mitchell:  A monastic trained sorcerer learns his precious magic has disturbing depths, and he’s dragged into a conflict where forbidden powers are unleashed.

TQ:  Tell us something about A Crucible of Souls that is not found in the book description.

Mitchell:  There are multiple point of view characters whose story arcs are critical, but they may not intersect with the main character until book two or three…

TQ:  What inspired you to write A Crucible of Souls? What appeals to you about writing Epic Fantasy?

Mitchell:  I love detailed world building and well thought out magic systems. And with epic fantasy, the world, culture and settings are as important as the characters. The stakes are usually high – the conflicts and issues are larger than life. I started writing A Crucible of Souls because I enjoyed bringing my world and characters to life, along with describing what I thought was an interesting magic system. I wrote for myself, and afterwards decided to look at publishing.

TQ:  What sort of research did you do for A Crucible of Souls?

Mitchell:  I didn’t do any research. I think with years of reading fantasy and sci-fi you subconsciously absorb a lot of information from other authors on how they do things and what you like and don’t like. I don’t read anything else, so it has to rub off!

Mitchell:  Amerdan was the easiest to write, and I think it was because I could have him do anything and get away with it. Along with the fact he can be unpredictable. And the hardest would have to be the main character, Caldan. It was tricky to guide a sheltered young man through various difficulties without making him seem stupid or shallow. I hope I succeeded!

TQ:  Which question about A Crucible of Souls do you wish someone would ask? Ask it and answer it!

Mitchell:  Most authors create a magic system and then look for ways to break it - did you, and if so what was the result? I’m glad you asked! I came up with a way of changing the game completely one day while in the shower (my best ideas appear there). Without revealing too much, the science behind experimental fusion reactors and the Large Hadron Collider gave me a way to take my sorcery to the next level.

TQ:  Give us one or two of your favorite non-spoilery lines from A Crucible of Souls.

Mitchell:  “You will not fail if you accept death. I don’t fear death, only failure.”

Mitchell:  The sequel, Blood of Innocents, comes out in January 2016 (February for US readers). And the third book has already been delivered to Harper Voyager and will be released in August/September 2016. I’ve also just released a sci-fi space opera novel, Inquisitor. And now I’m writing a stand alone epic fantasy set in a different world, and coming up with ideas for another series set in the same world as A Crucible of Souls. 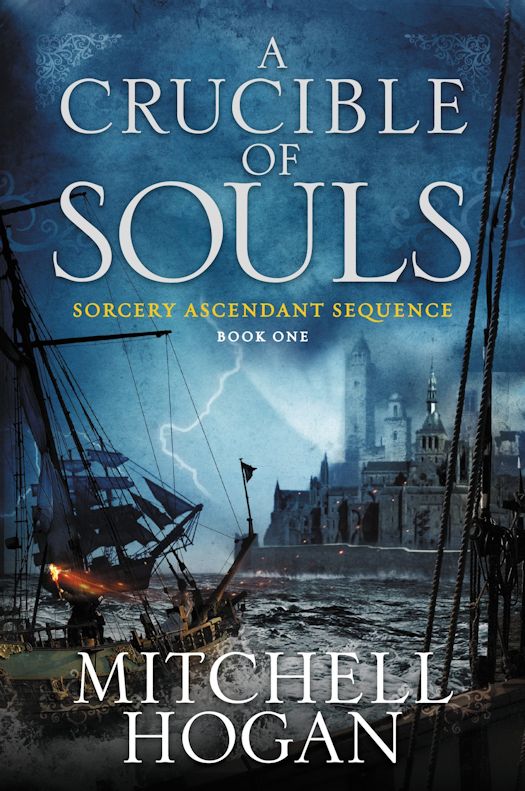 An imaginative new talent makes his debut with the acclaimed first installment in the epic Sorcery Ascendant Sequence, a mesmerizing tale of high fantasy that combines magic, malevolence, and mystery.

When young Caldan’s parents are brutally slain, the boy is raised by monks who initiate him into the arcane mysteries of sorcery.

Growing up plagued by questions about his past, Caldan vows to discover who his parents were, and why they were violently killed. The search will take him beyond the walls of the monastery, into the unfamiliar and dangerous chaos of city life. With nothing to his name but a pair of mysterious heirlooms and a handful of coins, he must prove his talent to become apprenticed to a guild of sorcerers.

But the world outside the monastery is a darker place than he ever imagined, and his treasured sorcery has disturbing depths he does not fully understand. As a shadowed evil manipulates the unwary and forbidden powers are unleashed, Caldan is plunged into an age-old conflict that will bring the world to the edge of destruction.

Soon, he must choose a side, and face the true cost of uncovering his past.

When he was eleven, Mitchell Hogan was given The Hobbit and The Lord of the Rings to read, and a love of fantasy novels was born. He spent the next ten years reading, rolling dice, and playing computer games, with some school and university thrown in. Along the way he accumulated numerous bookcases filled with fantasy and sci-fi novels and doesn’t look to stop anytime soon. His first attempt at writing fantasy was an abysmal failure and abandoned after only one page. But ideas for characters and scenes continued to come to him and he kept detailed notes of his thoughts, on the off chance that one day he might have time to write a novel. For ten years he put off his dream of writing until he couldn’t stand it anymore. He knew he would regret not having tried to write the novel percolating inside his head for the rest of his life. Mitchell quit his job and lived off dwindling savings, and the support of his fiancé, until he finished the first draft of A Crucible of Souls. He now writes full time and is eternally grateful to the readers who took a chance on an unknown author. Mitchell lives in Sydney, Australia, with his wife, Angela, and daughter, Isabelle.