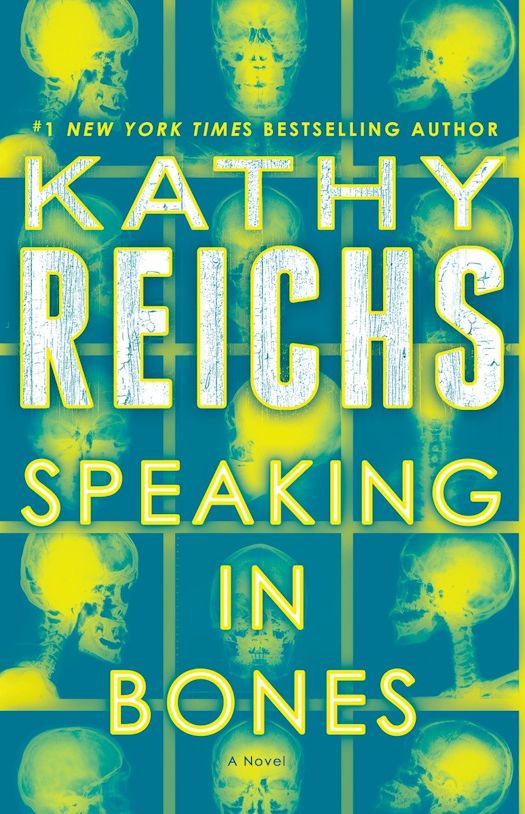 No one speaks the language of suspense more brilliantly than Kathy Reichs, author of the acclaimed Temperance Brennan series. In Speaking in Bones, the forensic anthropologist finds herself drawn into a world of dark secrets and dangerous beliefs, where good and evil blur.

Professionally, Temperance Brennan knows exactly what to do—test, analyze, identify. Her personal life is another story. She’s at a loss, wondering how to answer police detective Andrew Ryan’s marriage proposal. But the matter of matrimony takes a backseat when murder rears its head.

Hazel “Lucky” Strike—a strident amateur detective who mines the Internet for cold cases—comes to Brennan with a tape recording of an unknown girl being held prisoner and terrorized. Strike is convinced the voice is that of eighteen-year-old Cora Teague, who went missing more than three years earlier. Strike is also certain that the teenager’s remains are gathering dust in Temperance Brennan’s lab.

Brennan has doubts about working with a self-styled websleuth. But when the evidence seems to add up, Brennan’s next stop is the treacherous backwoods where the chilling recording (and maybe Cora Teague’s bones) were discovered. Her forensic field trip only turns up more disturbing questions—along with gruesome proof of more untimely deaths.

While local legends of eerie nocturnal phenomena and sinister satanic cults abound, it’s a zealous and secretive religious sect that has Brennan spooked and struggling to separate the saints from the sinners. But there’s nothing, including fire and brimstone, that can distract her from digging up the truth and taking down a killer—even as Brennan finds herself in a place where angels fear to tread, devils demand their due, and she may be damned no matter what.

Speaking in Bones is Kathy Reichs’ 18th novel featuring Temperance Brennan, forensic anthropologist who splits her time between North Carolina and Montreal, Canada. Her novels also are the basis for the TV show, Bones. In this story, Tempe has just received a marriage proposal from her long-time love, Andrew Ryan, and she is unsure how to respond. We also see a good deal of her mother, Daisy, who suffers from severe mental illness.

The basis of the mystery itself is a set of bones which may or may not belong to a missing girl. This girl also may suffer from serious mental illness herself. Tempe meets Hazel “Lucky” Strike, a websleuth who believes she has connected the girl with the bones. However, the girl is not the only missing person, and the mystery only deepens as Tempe investigates a fringe church splintered from Roman Catholicism.

What I appreciate most about these stories is the research that Reichs obviously has done, not only in her real-life profession as a forensic anthropologist, but also on the topics that occur in her novels. In this case, the reader learns about web-sleuthing through online sites dedicated to helping find missing persons and solve cold homicides, the haunted lights of Brown Mountain, diseases that cause fingers to lose fingerprints, and mountain rescue procedures.

I also appreciate the interactions that Tempe has with her family – her mother, her sister, and her daughter, not to mention her ex-husband and her potential fiancé, Andrew Ryan. In spite of her professional expertise, Tempe does not have her personal life as well organized. In fact, she agonizes for most of the story over how to handle Ryan’s proposal and why she is hesitating. She struggles with an aging parent as well as a grown child fighting in Afghanistan. She suffers from heartburn and neglects to eat properly or exercise regularly. Worse than all of that, she puts off handling her taxes until the last minute. She is a well-rounded woman with whom I can identify.

I thought I had solved the mystery several different times, but the story twists, in a good way, into areas that I never expected. I cannot say more without spoiling the story, but I did like how it ended. I could see the various steps that Reichs included to lead you to the ending. I do get tired of how often Tempe rushes to disaster, but at least she has learned to text her fellow officers first when she makes a stupid decision to visit the potential killer in their lair. Overall, another good addition to the Temperance Brennan canon.