Please welcome Adam Rakunas to The Qwillery as part of the 2015 Debut Author Challenge Interviews. Windswept was published on September 1st by Angry Robot Books. 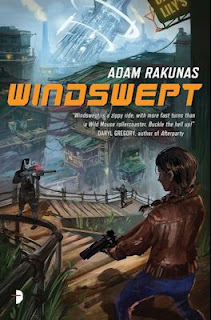 No, really! The first story I ever wrote was after my dad took me to my first baseball game, the California Angels versus the Toronto Blue Jays. The Angels were my home team, and they got stomped. The next day, we had a class assignment to write a story, so I wrote one about I had gone to a baseball game and heard the Blue Jays’ manager say they were going to cheat. I told the umpire, the Angels won, and I saved the day. Clearly, I was meant to be a fantasist.

Adam:  I’m a Reformed Pantser. I need structure to keep a story moving, so I spend all my agonizing time working on outlines. Windswept took two years for a first draft; its sequel took six months, all thanks to Mark Teppo’s Twenty-Five Chapter Structure (ALL PRAISE TEPPO). By having a framework, I can focus on having Padma talking.

TQ:  Your bio states that you've been a "virtual world developer" among other things. How has this experience affected or not your novel writing?

Adam:  That was the weirdest desk job I ever had. I still can’t believe I was paid to do that or that people made large amounts of money during that Second Life land rush. I suppose that experience reminded me that business is weird, and that it’s a miracle the whole economy doesn’t implode on a more regular basis.

I supposed its greatest effect was that it reminded me that I am terrible at working with clients.

Adam:  Douglas Adams for the absurdity. Kurt Vonnegut for the humanity. Beverley Cleary for the character focus.

Adam:  Padma Mehta is in a race against time to save her city, her world, and Occupied Space...all before Happy Hour.

TQ:  Tell us something about Windswept that is not found in the book description.

I love screwball comedies. I love the way the dialogue crackles. I love how smart the characters are. I could see Padma mixing it up with Cary Grant and besting him.

TQ:  What inspired you to write Windswept?

Adam:  I was in Honolulu to officiate a wedding (I’m a non-denominational minister, and I work for beer and tacos), and I was sitting at the hotel bar before the rehearsal dinner. All the people working there had name tags with their home towns, and no one was from Hawaii. Everyone had come here to one of the most beautiful places on Earth, and they were pouring drinks or bussing tables. All over the island, people were doing the jobs that kept the place running. If I were in their place, would I be able to focus on work, or would I be thinking about running around Diamondhead or surfing on the North Shore or doing anything other than wanting to work?

I started pecking away on my phone and wrote out the first scene: Padma sitting at her local bar, thinking about work. She wanted to quit to enjoy the beautiful place she lived in, but she couldn’t yet. Why?

And then we were off to the races.

TQ:  What appeals to you about writing Science Fiction? In your opinion, should SF tackle big issues, just be entertaining, or do both?

Adam:  I grew up reading science fiction, starting with Douglas Adams and Star Trek before a college friend loaned me his copy of Kim Stanley Robinson’s Three Californias. It hadn’t occurred to me that you could write stories about futures like that. You can make a blueprint for the future you want (like Pacific Edge) or the ones to avoid (like The Wild Shore or The Gold Coast).

But you also have to tell a good story, and those books did that in spades. Tackling issues is important, but I like a story that sneaks in the editorials.

TQ:  What sort of research did you do for Windswept?

Adam:  I bookmarked a lot of pages on Wikipedia about sugarcane, rum, and horrible plant diseases. I winged it for the rest.

Adam:  Padma was both. It was a lot of fun to write her snappy rejoinders, but I had a hell of a time making her be little more than a quip machine. I hope I pulled it off.

TQ:  Which question about Windswept do you wish someone would ask? Ask it and answer it!

Adam:  Why a crane chase? Because I thought it would be funny.

TQ:  Give us one or two of your favorite non-spoilery lines from Windswept.

Adam:  “Your level isn’t on the level. You’re so crooked it defies physics.”

Adam:  I’m revising the sequel to Windswept right now. As soon as I turn that in to my cybernetic overlords at Angry Robot Books, I want to get started on a story about family stories and talking guns.

Adam:  Thanks for having me! 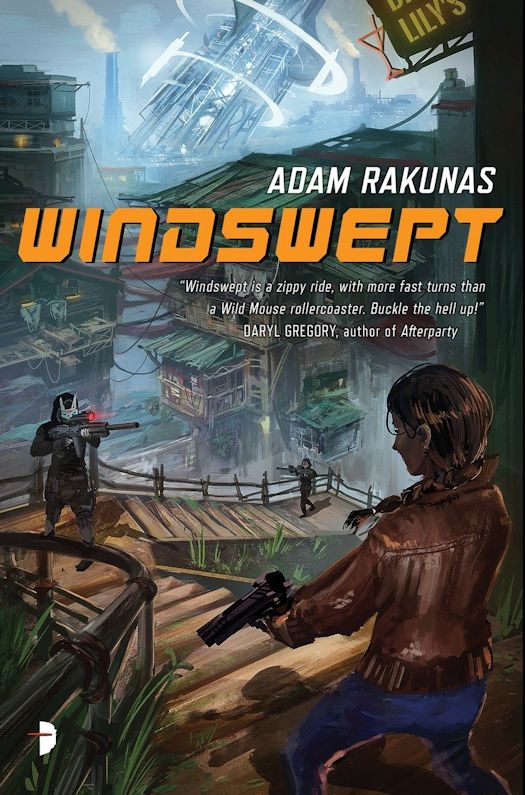 Padma Mehta has to save her city, her planet, and Occupied Space from a devastating crop-killing plague — all before Happy Hour.

Labor organizer Padma Mehta is on the edge of space and the edge of burnout. All she wants is to buy out a little rum distillery and retire, but she’s supposed to recruit 500 people to the Union before she can. She’s only thirty-three short. So when a small-time con artist tells her about forty people ready to tumble down the space elevator to break free from her old bosses, she checks it out — against her better judgment. It turns out, of course, it was all lies.

As Padma should know by now, there are no easy shortcuts on her planet. And suddenly retirement seems farther away than ever: she’s just stumbled into a secret corporate mission to stop a plant disease that could wipe out all the industrial sugarcane in Occupied Space. If she ever wants to have another drink of her favorite rum, she’s going to have to fight her way through the city’s warehouses, sewage plants, and up the elevator itself to stop this new plague. 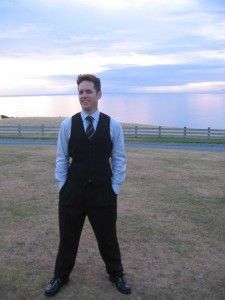 Adam Rakunas has worked a variety of weird jobs. He’s been a virtual world developer, a parking lot attendant, a triathlon race director, a fast food cashier, and an online marketing consultant.

Now a stay-at-home dad, Adam splits his non-parenting time between writing, playing the cello, and political rabble-rousing. His stories have appeared in Futurismic and the Magazine of Fantasy and Science Fiction. Windswept is his first novel.