Interview with Edward Ashton, author of Three Days in April


Please welcome Edward Ashton to The Qwillery as part of the 2015 Debut Author Challenge Interviews. Three Days in April is published on September 15th by Harper Voyager Impulse. Please join The Qwillery in wishing Edward a Happy Publication Day! 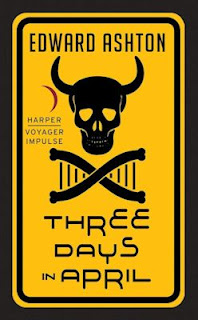 Edward:  I know this is cliche, but I've been writing for as long as I can remember. I made my first attempt at a novel when I was twelve. It was two hundred pages long, written in longhand, in pencil, on loose-leaf notebook paper. The only person who read it was my father. He told me it was "hackneyed and derivative." He hasn't read Three Days in April yet. I'm kind of hoping he gives this one a better review.

Edward:  Oh, definitely a pantser. I usually start off with a single image, or maybe a short scene. For my most recent short piece, for example, I began with a man stepping onto the tarmac of a deserted airfield in the dead of winter. I had no idea who he was or why he was there, but I thought he'd probably wind up doing something interesting. Three Days in April actually began with the climactic scene. Once I knew how that was going to go, I just had to figure out how to get there.

TQ:  What is the most challenging thing for you about writing? What were some of the particular challenges you found in going from writing short fiction to writing a novel?

Edward:  For me, the most difficult part is always maintaining discipline about my storylines. I have a tendency to become overly interested in minor characters, and to wind up following them on sub-plots that don't tie cleanly back to the main flow of the story. Obviously, this tendency is much more dangerous when you're working on a novel than when you're limiting yourself to four thousand words. During the editing phase of Three Days in April, I wound up cutting over thirty thousand words, including a couple of chapters that were probably the ones that I had the most fun writing. At the end of the day, though, they wound up leading down blind alleys, and they had to go.

Edward:  I'm pretty eclectic in both my reading and my writing, and different pieces that I've written over the years are definitely flavored by the authors I happen to have been reading at the time. There's a short list of authors that I've read and re-read, though. In no particular order: Douglas Adams, Ernest Hemingway, Kurt Vonnegut, David Brin, Margaret Atwood, and George R. R. Martin (pre-GoT, which I don't actually like all that much. Dying of the Light is probably my all-time favorite book.)

TQ:  Describe Three Days in April in 140 characters or less.

TQ:  Tell us something about Three Days in April that is not found in the book description.

Edward:  The book actually addresses some serious issues about the shifting balance between the right to privacy, and the state's need to protect us from our own worst impulses. Also, although many bad things happen over the course of Three Days in April, there are no actual bad guys -- just lots of people with conflicting ideas about what it means to be good.

TQ:  What inspired you to write Three Days in April? What appealed to you about writing a speculative thriller?

Edward:  The original inspiration for the book came from one of the approaches to cancer therapy that my lab was working on at the time. In the interests of not giving too much away, let's just say that it occurred to me that the basic idea we were exploring could potentially be applied in a much less beneficial way. As far as writing a speculative thriller goes, I don't think I ever really thought about it in those terms. I just had a story that I wanted to tell.

TQ:  What sort of research did you do for Three Days in April?

Edward:  One of the most over-used pieces of advice given to beginning writers is to write what you know. Believe it or not, that's pretty much what I did here. I'm a stickler for technical accuracy, so I had to look up some details--like the actual velocity of a de-orbited kinetic energy weapon, and the energy that weapon releases on impact--but most of the sciency stuff in the book overlaps very closely with my educational and professional background.

Edward:  There are four POV characters in Three Days in April. Gary, the probably-on-the-spectrum data-thief roommate, was definitely the easiest to write. He's easily distracted, so it was okay to flit from one interesting topic to the next when he was narrating, and he has absolutely no social filters, so he wound up with all the best one-liners. Elise, who's the only survivor of the disaster that sets the plot rolling, was easily the hardest, mostly because it's always a challenge for me to write in first-person from the perspective of a character of the opposite gender. My first readers are both women, and I cannot tell you how many times Elise's chapters came back to me with notes pointing out that a woman in this or that situation would never think/do/say what I'd just written.

TQ:  Which question about Three Days in April do you wish someone would ask? Ask it and answer it!

Q: How speculative is this book, really?

A: Not nearly as much as you probably wish.

TQ:  Give us one or two of your favorite non-spoilery lines from Three Days in April.

1. As God is my witness, I will never understand how people like this drove people like me to extinction.

2. Doug pulls a pound of butter from the refrigerator and a pint of vodka from the freezer. He eats the butter like a muppet—jaws flapping enthusiastically, but at least half of what goes into his mouth falling back out—then washes it down with all of the vodka.

“Not too worried about cholesterol, huh?” I ask.

Edward:  Well, I'm currently about half-way through the first draft of Untitled Novel #2 (or #3, depending on whether you count Hackneyed and Derivative.) I've also been trying to put out a new short piece every month or so. I've got one I'm really proud of coming out some time in September in Daily Science Fiction. It's called "Listen," and it's set in the same basic milieu as Three Days in April, though it definitely has a much darker tone.

Edward:  Thank you. I really appreciate the opportunity. 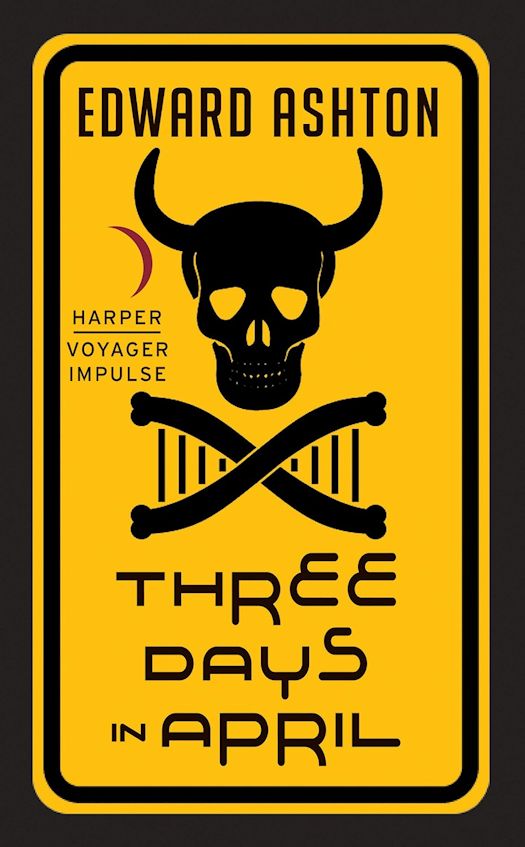 Anders Jensen is having a bad month. His roommate is a data thief, his girlfriend picks fights in bars, and his best friend is a cyborg…and a lousy tipper. When everything is spiraling out of control, though, maybe those are exactly the kind of friends you need.

In a world divided between the genetically engineered elite and the unmodified masses, Anders is an anomaly: engineered, but still broke and living next to a crack house. All he wants is to land a tenure-track faculty position, and maybe meet someone who's not technically a criminal—but when a nightmare plague rips through Hagerstown, Anders finds himself dodging kinetic energy weapons and government assassins as Baltimore slips into chaos. His friends aren't as helpless as they seem, though, and his girlfriend's street-magician brother-in-law might be a pretentious hipster—or might hold the secret to saving them all.

Frenetic and audacious, Three Days in April is a speculative thriller that raises an important question: once humanity goes down the rabbit hole, can it ever find its way back? 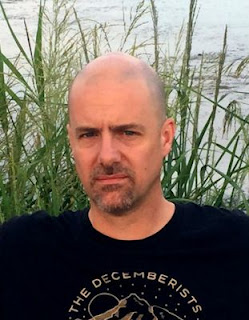 Edward Ashton lives with his adorably mopey dog, his inordinately patient wife, and three beautiful but terrifying daughters in Rochester, New York, where he studies new cancer therapies by day, and writes about the awful things his research may lead to by night. His short fiction has appeared in dozens of venues, ranging from Louisiana Literature to Daily Science Fiction. THREE DAYS IN APRIL is his first novel.