Please welcome Fran Wilde to The Qwillery as part of the 2015 Debut Author Challenge Interviews. Updraft was published on September 1st by Tor Books. 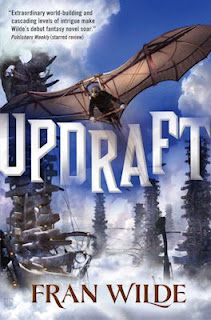 Fran:  I’ve been a writer since elementary school at least. My family has many storytellers – the older generation likes to sit a spell and talk, and it’s sometimes hard to figure where facts end and stories begin. I like writing because then the story stays fixed on an axis, at least usually.

Fran:  Making sure I put writing first is most challenging. So many things want my time and attention. When I wake up before everyone else and get those first couple hundred words down, I know I’ll have a good workday. When I start off by answering emails and problem solving, sometimes I don’t get enough time to focus on what I love to do.

Favorite authors – that’s nearly impossible – I have too many. I often keep lists of favorite stories I’ve read on my website, and I try to keep track of books on goodreads, if that helps – you’re welcome to sort through my bookshelves, although they’re not terribly well organized.

TQ:  Tell us something about Updraft that is not found in the book description.

Fran:  Someone gets devoured fairly early.
… was that Too Much Information?

TQ:  What inspired you to write Updraft? What appeals to you about writing Fantasy?

Fran:  I write both science fiction and fantasy, but this world and these characters, wanted a more fantastical approach. Originally, I was inspired to write the world of Updraft with a story prompt at a writers’ workshop… one that turned into a short story that is actually part of Updraft’s sibling, Cloudbound. A different short story I was writing in the same world became Updraft.

TQ:  What sort of research did you do for Updraft?

Fran:  I did a lot of research on altitude variations in foods; on bone growth and structures; on [REDACTED] and [REDACTED]; and especially on flight and foils and wings. I went indoor skydiving to get the feel of flying in a wind tunnel. I spent a lot of time in skyscrapers, out on the high balconies. And birds. Lots of birds.

Fran:  Not easiest, but the voice I heard clearest and first was Kirit’s, followed by Nat’s and Ezarit’s.

The hardest were Rumul, for reasons I can’t get into without spoilers, and one other character, because I wanted him to be very real, and even his own community doesn’t quite see him straight.

TQ:  Which question about Updraft do you wish someone would ask? Ask it and answer it!

FW: Are there other stories going on in the city at the same time as this story?

Oh yes. I tried to write with an eye to the fact that Kirit’s and Nat’s story is one of many, and that there are many stories that have come before and will come after. That way, the city felt big and busy and populated with real characters who weren’t just sitting around waiting for my characters to do something. There are absolutely other stories going on, other mechanisms turning. But for a moment, the story that really matters is this one.

There are a few short stories set in this world already, featuring other characters, and other time periods. One, “A Moment of Gravity, Circumscribed,” appeared first in the anthology Impossible Futures, edited by Tom Easton and Judith K. Dial, and then was reprinted in the anthology XIII, edited by Mark Teppo. Another, “Bent the Wing, Dark the Cloud,” appears in Beneath Ceaseless Skies this September.

And I’m pretty certain there will be more.

TQ:  Give us one or two of your favorite non-spoilery lines from Updraft.

Fran:  On a morning like this, fear was a blue sky emptied of birds. It was the smell of cooking trapped in closed towers, of smoke looking for ways out. It was an ache in the back of the eyes from searching the distance, and a weight in the stomach as old as our city.

Fran:  Next after Updraft chronologically, is the Tor.com novella “The Jewel and Her Lapidary,” which is a hidden-history-epic-fantasy-in-miniature, set in the same Gem Universe as “The Topaz Marquise” (Beneath Ceaseless Skies, 2014).

Fran:  Thank you so much for having me to visit, Sally! 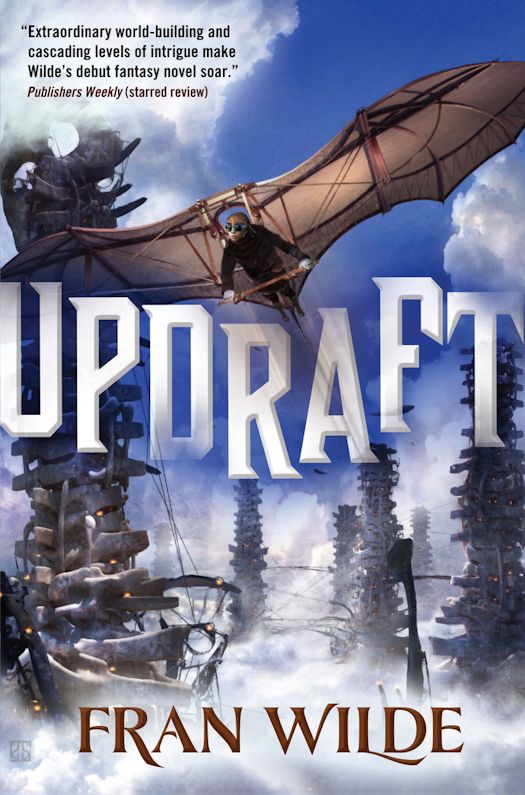 FRAN WILDE’s acclaimed short stories have appeared in Asimov’s, Nature, Beneath Ceaseless Skies, and Tor.com. Aside from her writing career, she has worked as a science and engineering writer, as a programmer and game developer, as a sailing assistant, and as a jeweler’s assistant. She lives in Pennsylvania with her family. You can find her online at franwilde.wordpress.com.

What:  One entrant will win a hardcover copy of Updraft by Fran Wilde from the Tor Books. US / CANADA ONLY

Who and When:  The contest is open to all humans on the planet earth with a US or Canadian mailing address. Contest ends at 11:59 PM US Eastern Time on September 25, 2015. Void where prohibited by law. No purchase necessary. You must be 18 years old or older to enter.