THE FEW Collected in Paperback in August

In an America divided between the haves and the have-nots, Edan Hale is a soldier on the run. Saddled with a gas-mask-wearing infant and aided by the very terrorists she was once sworn to hunt, Edan has become a woman without a country in a place where survival is only possible if you have allies.

“I had this dream where a woman was in the woods, and in her arms was a baby wearing nothing but a gas mask,” said Lewis. “I'm a new dad, and I think I get really worried about the world my son is going to grow up in and the toxicity of that. But the book isn't just about that—it's about how people make amends and how they become good. Both things I hope my son also learns.”

“With the world experiencing what it is, and with so many people at each other’s throats, I will always be thankful for the chance to explore and illustrate these contemplative stories alongside Sean,” said Sherman. “I couldn't have asked for a better first foray into the world of professional comics, and I certainly couldn't have asked for a better partner to go into it with.”

THE FEW is available for preorder via Amazon, Barnes & Noble, Indiebound, and Indigo. 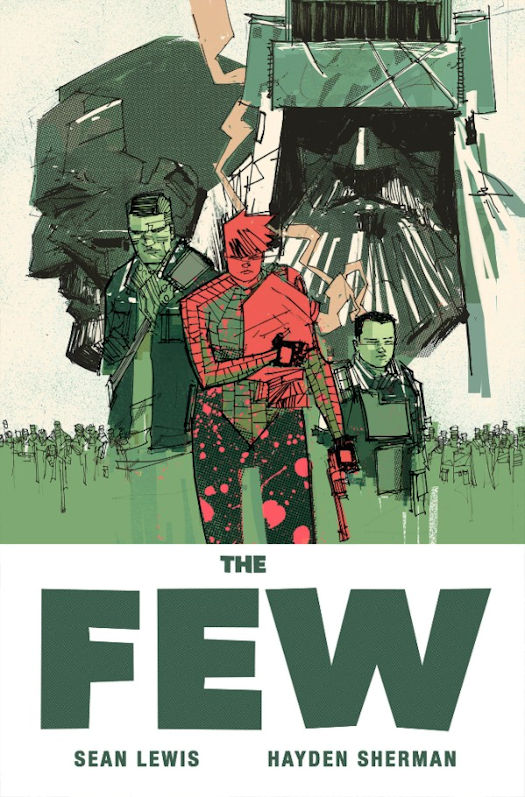 ABOUT IMAGE COMICS
Image Comics is a comic book and graphic novel publisher founded in 1992 by a collective of bestselling artists. Image has since gone on to become one of the largest comics publishers in the United States. Image currently has five partners: Robert Kirkman, Erik Larsen, Todd McFarlane, Marc Silvestri, and Jim Valentino. It consists of five major houses: Todd McFarlane Productions, Top Cow Productions, Shadowline Comics, Skybound Entertainment, and Image Central. Image publishes comics and graphic novels in nearly every genre, sub-genre, and style imaginable. It offers science fiction, fantasy, romance, horror, crime fiction, historical fiction, humor and more by the finest artists and writers working in the medium today. For more information, visit www.imagecomics.com.
Posted by Qwill at 8:15 AM