Please welcome David Burr Gerrard to The Qwillery as part of the of the 2017 Debut Author Challenge Interviews. The Epiphany Machine is published on July 18th by G.P. Putnam's Sons. 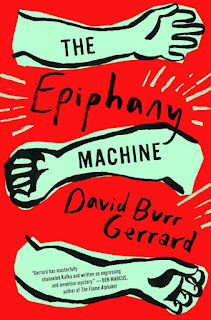 David:  I’ve been writing since high school. I wanted to make readers feel something like what I felt when I read my favorite writers—particularly writers like Franz Kafka and Jorge Luis Borges who could turn the world upside down and inside out in a way that would show it exactly as it was.

David:  I’m a failed plotter, which makes me a reluctant pantser. I make elaborate plans that get me lost deep in the darkest woods, and then I have to find my way out with nothing but a stick and a broken compass. Lucky for me, the woods are where they keep the best stories.

TQ:  You teach fiction writing. How does that affect (or not) your own writing?

David:  It’s constantly making me articulate what I think about fiction, which is a good way to clear out the cobwebs and the lazy assumptions that gather in my approach. Plus, it’s getting paid to hang out with cool people and read the stuff they make up.

TQ:  Describe The Epiphany Machine in 140 characters or less.

David:  It’s about a device that tattoos epiphanies on the forearms of its users.

TQ:  Tell us something about The Epiphany Machine that is not found in the book description.

David:  When I first started writing The Epiphany Machine, the epiphanies were not tattooed onto the body, but rather inscribed on blocks of wood. The more I wrote, the more I realized that whatever wisdom the machine had would have to wound the flesh.

TQ:  What inspired you to write The Epiphany Machine? What appeals to you about writing alternative history?

David:  All fiction is alternate history, even (maybe especially) fiction that presents itself as literally true. Big historical figures—politicians, rock stars—are always making up stories that they tell us about ourselves, so why can’t we flip it around and do the same for them? I wrote The Epiphany Machine in part because I wanted to talk back to the big cultural forces that tell us how to live our
lives.

TQ:  What sort of research did you do for The Epiphany Machine?

David:  Most of the research I did for The Epiphany Machine I did without realizing it was research. I read something that interested me and then it worked its way into the book, like ink working its way into an arm.

Beyond that, I allowed my imagination to roam free, trampling whatever gardens it wished. If anyone took anything in The Epiphany Machine as historical record, I would be horrified, though to be more honest than I probably should be, I would probably also be amused.

TQ:  Why did you set the novel in New York City?

David:  The simple answer is that I live here, and everyone thinks that where they live is the center of the universe. Unlike people who don’t live in New York City, I happen to be right. (I’m kidding, I’m kidding.)

TQ:  Please tell us about the cover for The Epiphany Machine.

David:  Putnam’s brilliant Stephen Brayda designed the wonderful cover, which puts the novel’s idea of forearm epiphany tattoos to beautiful, thoughtful, witty use. My single favorite detail is that Putnam’s insignia, which goes on the spine of every Putnam book, is transformed into an epiphany tattoo.

TQ:  In The Epiphany Machine who was the easiest character to write and why? The hardest and why?

David:  The hardest to write was Adam Lyons, the epiphany machine’s proprietor/prophet. I didn’t want him to be a clichéd cult leader out of a movie—long hair and robes, that sort of thing—but I had a lot of difficulty figuring out who else he can be. Then one night my friend Michael Seidenberg, who runs the secret Upper East Side bookstore Brazenhead Books—and who has an earthy, open, magnetic personality—mentioned offhand that he had always wanted to be a cult leader. Then I started writing Adam imagining he was Michael, and he instantly became the easiest character to write.

David:  I don’t see how it’s possible not to include social issues. Everybody exists in society. Every f your story is about one person who is isolated by force or choice, there are complex social factors that made that isolation possible and—whether for your character or whoever put your character into isolation—desirable.

TQ:  Which question about The Epiphany Machine do you wish someone would ask? Ask it and answer it!

Q: If this book were written by the epiphany machine itself, rather than by you, would you be honest about that?

TQ:  Give us one or two of your favorite non-spoilery quotes from The Epiphany Machine.

“What is surprising is never what is revealed but the grace with which it has been hidden.”

“Failure was something that might happen, but probably to other people, and death lay in a future so remote we would be long dead by the time it arrived.”

David:  I’m working on a novel about a mysterious disease that appears to be killed everyone born in 1981 (the year I was born) but is leaving everyone else unaffected. Wish me luck! 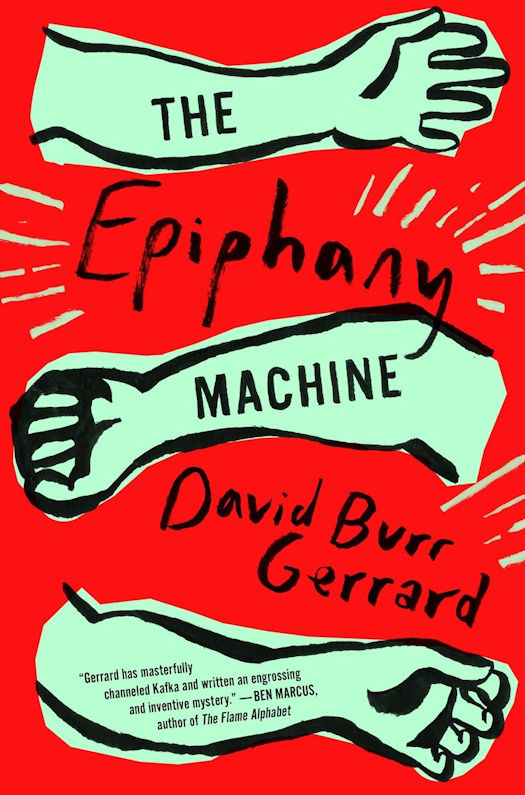 Everyone else knows the truth about you, now you can know it, too.

That’s the slogan. The product: a junky contraption that tattoos personalized revelations on its users’ forearms. It’s an old con, playing on the fear that we are obvious to everybody except ourselves. This particular one’s been circulating New York since the 1960s. The ad works. And, oddly enough, so might the device…

A small stream of city dwellers buy into this cult of the epiphany machine, including Venter Lowood’s parents. This stigma follows them when they move upstate, where Venter can’t avoid the whispers of teachers and neighbors any more than he can ignore the machine’s accurate predictions: his mother’s abandonment and his father’s disinterest. So when Venter’s grandmother finally asks him to confront the epiphany machine and inoculate himself against his family’s mistakes, he’s only too happy to oblige.

Like his parents before him, Venter is quick to fall under the spell of the device’s sweat-stained, profane, and surprisingly charming operator, Adam Lyons. But unlike them, Venter gets close enough to Adam to learn a dark secret. There’s an undeniable pattern between specific epiphanies and violent crimes. And Adam won’t jeopardize the privacy of his customers by alerting the police.

It may be a hoax, but that doesn’t mean what Adam is selling isn’t also spot-on. And in this sprawling, snarling tragicomedy about accountability in contemporary America, the greater danger is that Adam Lyon’s apparatus may just be right about us all.

David Burr Gerrard is the author of The Epiphany Machine (Putnam, 2017). He received an MFA in fiction writing from Columbia University. His first novel, Short Century, was published by Rare Bird Books, and his work has appeared in The Awl, The LA Review of Books, BOMB, Guernica, and other publications. He teaches fiction writing at Manhattanville College, the 92nd Street Y, and the Sackett Street Writers’ Workshop.