Please welcome Vivian Shaw to The Qwillery as part of the of the 2017 Debut Author Challenge Interviews. Strange Practice was published on July 25th by Orbit. 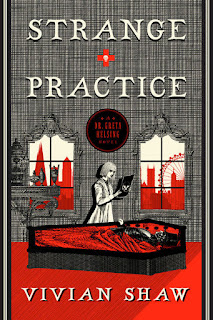 Vivian:  Thank you! I've been writing since I was very small; I think I started my first trilogy around age 11 or 12. Those weren't novel-length, probably around 20,000 words, but for a kid that's not too shabby. Mostly I wrote books because I loved reading them, and I had my own stories I wanted to tell.

Vivian:  Not gonna lie, I had to look this one up. I think I prefer George R.R. Martin's are you an architect or a gardener taxonomy of writers, but of the three options you present I'm definitely a hybrid. I have the plot of any given arc or scene outlined -- i.e. this character has to do this thing or get to this place -- and the specific means by which I get that done often just comes to me as I go along. I find it helpful to talk over a scene with someone else, because complaining out loud about how it's not working or I can't come up with an idea almost always kickstarts my brain into figuring out the answer.

Vivian:  Doing it when I don't want to, or I'm tired, or I can't come up with good words but I'm on deadline and I have to produce.

Vivian:  The authors who have been most influential on me are Mervyn Peake, Robin McKinley, Stephen King, Terry Pratchett, and Neil Gaiman; but I find inspiration everywhere, from architecture to urban exploration blogs to medical case studies. I'm interested in so many things.

Vivian:  Greta Helsing, doctor to London’s monstrous and undead, fights to defend her community alongside characters out of classic vampire lit.

TQ:  Tell us something about Strange Practice that is not found in the book description.

Vivian:  There's not only ghouls, but demons, a witch, lots of detail about the geography of the London sewer system, and frank discussion of the nature of Heaven and Hell. Also, I'd like to state for the record that I wrote the first version of this novel as a National Novel Writing Month entry back in 2004, so my concept of vampires in Volvos just barely predates Stephenie Meyer's in Twilight.

TQ:  What inspired you to write Strange Practice?

Vivian:  Two main threads gave rise to the original concept: the wonderfully spooky world of London's subterranean network of tunnels and shelters and conduits (and the amazing 1940s-vintage electrical technology that was at least up until recently still being used down there) and a challenge I gave myself to see how many characters from classic gothic/horror literature I could put together into a story. The original version included Dracula and Carmilla as well, but they ended up being reserved for future books in the series.

TQ:  What sort of research did you do for Strange Practice?

Vivian:  Lots of it. I mean lots. Nothing infuriates me more than an author who has either not bothered to do the research or has done the bare minimum to get themselves some useful-sounding buzzwords and concepts but failed to investigate what they actually mean. I spent a lot of time on Google Street View working out what my characters would have seen while moving through particular spaces, and I tracked down some actual plans for one of the deep-level shelters connected to a Tube station. Incidentally, while there is no deep-level shelter at the St. Paul's station, one was planned for that location -- but excavations were halted when concerns for the stability of the cathedral's foundation arose. Also the details of the science of mirabilics, my universe's version of magic, took a long time to work out and I wish I could have included more of that in the book.

TQ:  What do you think are the reasons for the ongoing popularity of the Van Helsing / Helsing family?

Vivian:  Vampire hunters have always been exciting. The original Van Helsing wasn't even slightly sexy, but he was an expert and he could advise Stoker's characters through their extraordinary experience; it's not surprising that later readers of the novel should have wondered about the possibilities of expanding the character and examining his backstory, wondering what kind of exciting adventures he could have had prior to the events of Dracula. Also, the name is cool.

TQ:  Please tell us about the cover for Strange Practice.

Vivian:  The cover artist is Will Staehle, the designer behind Unusual Co. (http://unusualco.com/) For Strange Practice Staehle has taken elements of immediately-recognizable modern London -- the landmark London Eye, the Shard, the Tower, Westminster Palace, even the Thames Flood Barrier -- and combined them with an old-fashioned Victorian engraving design that to me brings to mind the work of Edward Gorey, one of my favorite artists. The combination of modern and elegantly old-fashioned elements echoes the book's juxtaposition of characters from classic horror lit with the modern day.

TQ:  In Strange Practice who was the easiest character to write and why? The hardest and why?

Vivian:  Greta is dead easy, because she is an ordinary human: she has no powers at all other than skill and training and intelligence. I used to want to be a doctor myself, I read medical textbooks for fun, I'm fascinated with the history of medicine and therefore it's a lot of fun writing characters who work in the medical field. August Cranswell is also a human, but he's a bit more difficult because I don't have the knowledge background in museum studies that I do in medicine. Probably the Gladius Sancti monks were the most difficult, because I have the least in common with them, and it was challenging to get inside their heads.

TQ:  Which question about Strange Practice do you wish someone would ask? Ask it and answer it!

Vivian:  There are so many! One of the questions I'd love to answer is are arc rectifiers real? They absolutely are, and they're fantastically weird and gorgeous. The actual electromagnetic principles on which they work are elegantly simple, even for someone like me who has no official science background at all, and it is oddly satisfying to be able to see the principles in action rather than simply knowing they exist. Up until fairly recently a few of them were still on display, and even still in use, but I don't know if any of them are currently active. Google "mercury arc rectifier" and look at the videos to see what I mean.

TQ:  Give us one or two of your favorite non-spoilery quotes from Strange Practice.

Ruthven wasn't much of a traditionalist. He didn't even own a coffin, let alone sleep in one; there simply wasn't room to roll over, even in the newer, wider models, and anyway the mattresses were a complete joke and played merry hell with one's back.

"You are not human," she said at last, "but you are people. All of you. The ghouls, the mummies, the sanguivores, the weres, the banshees, the wights, the bogeys, everyone who comes to me for help, everyone who trusts me to provide it. You are all people, and you all deserve medical care, no matter what you do or have done, and you deserve to be able to seek and receive that care without putting yourselves in jeopardy. What I do is necessary, and while it isn't in the slightest bit easy, it is also the thing I want to do more than anything else in the world."

Sir Francis Varney was also damned, with the Devil and his angels and all the reprobate, and it was keeping him up at nights.

Vivian:  The next book in the Greta Helsing series, Dreadful Company, will be coming out next year. It's set in Paris, and follows Greta's somewhat complicated adventures in and under the city. Also featured: M. R. James monsters; remedial psychopomps; vampires in leather pants; a werewolf, and potential disruptions in the fabric of reality. The third book, Grave Importance, is set in a mummy spa and resort outside of Marseille where Greta is spending a year as acting medical director. There's also a lot of other projects I'm planning for the future, including a popular-history book on the space program and a science fantasy epic co-written with my wife, the author Arkady Martine.

Vivian:  Thank you for having me! 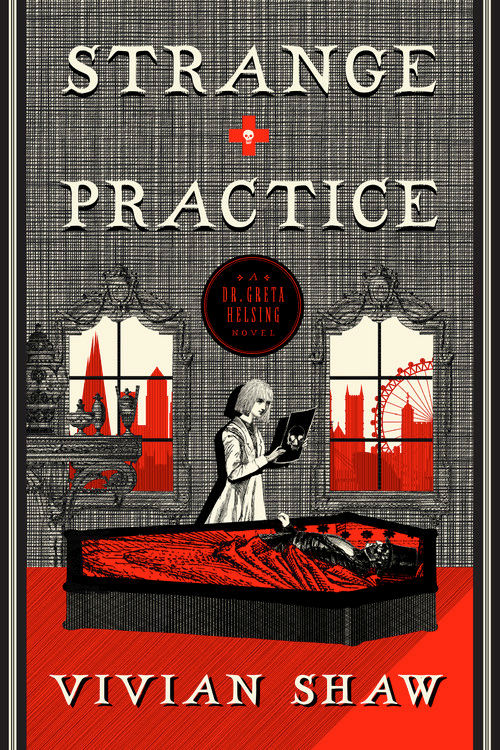 Dr. Greta Helsing has inherited the family's highly specialized, and highly peculiar, medical practice. She treats the undead for a host of ills - vocal strain in banshees, arthritis in barrow-wights, and entropy in mummies.

It's a quiet, supernatural-adjacent life, until a sect of murderous monks emerges, killing human and undead Londoners alike. As terror takes hold of the city, Greta must use her unusual skills to stop the cult if she hopes to save her practice, and her life.

Vivian Shaw was born in Kenya and spent her early childhood at home in England before relocating to the US at the age of seven. She has a BA in art history and an MFA in creative writing, and has worked in academic publishing and development while researching everything from the history of spaceflight to supernatural physiology. In her spare time, she writes fan fiction under the name of Coldhope.