NO. 1 WITH A BULLET Launching in November

NEW THRILLER NO. 1 WITH A BULLET
HITS THE MARK
PORTLAND, OR, 07/11/2017 — From the bestselling creative team behind GONERS, Jacob Semahn and Russ Manning Award-winning artist Jorge Corona team up once again for an all-new thriller in NO. 1 WITH A BULLET. The new series is set to launch this November.

Her social media, strong. Her variety show segments, a hit. In NO. 1 WITH A BULLET, Nash Huang is at the top of her game. But when the iRis Shutter contact lens hits the market, Nash’s life is personally invaded. The latest leap forward in “technological progress,” these contacts not only play video or augment reality… but also record with the blink of an eye. Fighting to keep her life together after a leaked sex tape goes viral, a clingy super fan is the last thing on Nash’s mind… but that’s exactly when the bodies pile up and the terror begins.

“The more I looked around at our world—the post-facts, the online victimization, the shouting past each other into the digital void—the more I wondered if technology has helped us more than hurt us,” said Semahn. “Without a second thought we give up privacy every day in order to appease our social media overlords, but at what cost? With patents filed for recordable contact lenses in order to ‘make sure you don’t miss a single moment of your life,’ where do we the draw the line? No. 1 explores both innovation and invasion. A stalker story at heart, with a Black Mirror feel, No. 1 With A Bullet paints an all too real future right around the corner.”

Corona added: “Social networks and the way the lines between private and public aspects of our lives have blurred with the advances of technology is something that fascinates me. It has connected the world in ways never before imagined, but it has also exposed a very dark side of us all that, in some cases, magnifies the proximity of how close we can feel to being vulnerable online. These are not new problems, these are issues society has been dealing with for years. Now, we’re just trying to understand how to deal with them in a completely different context. Exploring the human root in a world that has become so artificial was what drove me into making this project a priority.”

NO. 1 WITH A BULLET #1 will hit stores on Wednesday, November 1st. 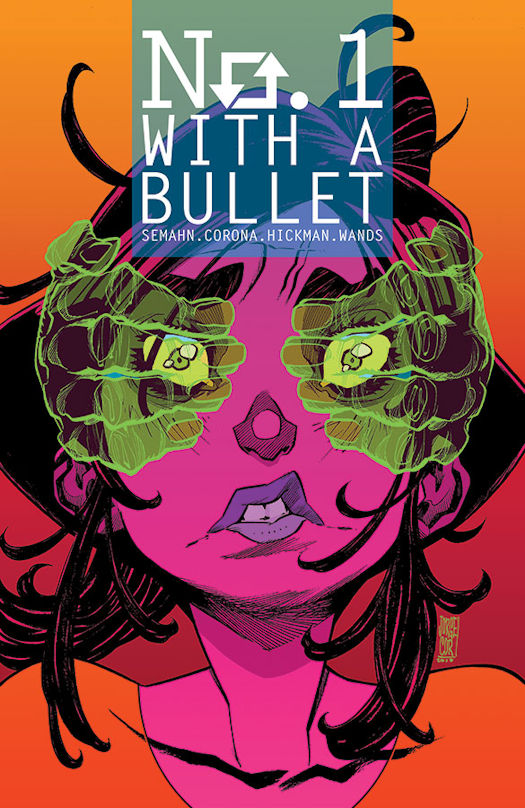 ABOUT IMAGE COMICS
Image Comics is a comic book and graphic novel publisher founded in 1992 by a collective of bestselling artists. Image has since gone on to become one of the largest comics publishers in the United States. Image currently has five partners: Robert Kirkman, Erik Larsen, Todd McFarlane, Marc Silvestri, and Jim Valentino. It consists of five major houses: Todd McFarlane Productions, Top Cow Productions, Shadowline Comics, Skybound Entertainment, and Image Central. Image publishes comics and graphic novels in nearly every genre, sub-genre, and style imaginable. It offers science fiction, fantasy, romance, horror, crime fiction, historical fiction, humor and more by the finest artists and writers working in the medium today. For more information, visit www.imagecomics.com.
Posted by Qwill at 7:38 AM