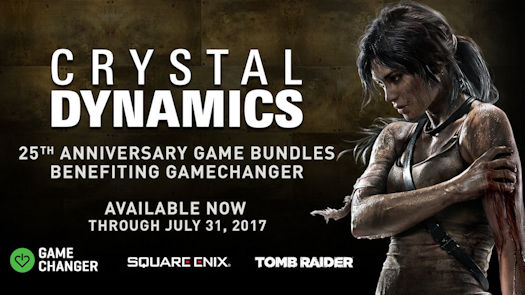 This July marks the 25th anniversary for Crystal Dynamics®, the studio behind the critically acclaimed and world-famous TOMB RAIDER® franchise which has sold over 58 million copies globally.  In celebration, the studio has organized a series of charitable events and activities that takes us on a trip down memory lane, commemorating Crystal’s 25 years of producing unforgettable experiences.

“The collaboration of our top industry talent all focused on creating ground-breaking, unprecedented gaming experiences is the engine that drives Crystal,” said Ron Rosenberg, Co-Head of Studio at Crystal Dynamics. “We’re extremely proud of all that we’ve accomplished over the last twenty-five years, and, as we look to the future, we are excited to bring our passion and craftsmanship to even more games including the 'Avengers' project.”

Starting July 18th, Square Enix® and Crystal Dynamics are offering an exclusive Crystal Dynamics 25th Anniversary game bundle through GameChanger. Patrons who donate $25 or more will receive this exclusive bundle of 12 new and classic Crystal Dynamics games, including Tomb Raider, Lara Croft® and the Temple of Osiris™, Legacy of Kain™: Defiance, Project Snowblind™, and more. Funds raised will be given to GameChanger Charity and support their mission of bringing happiness and gaming to children facing life-threatening illnesses in hospitals around the world.

“This is a momentous milestone for Crystal Dynamics, one we’re delighted to share with gamers everywhere by using this time to give back to charities that move and inspire us,” said Scot Amos, Co-Head of Studio at Crystal Dynamics. “Our studio is full of passionate creatives who shaped Lara Croft and Tomb Raider into iconic franchises. Our developers constantly give of themselves, pouring their heart and their art into each game. Now we are giving back in another way through this GameChanger campaign.”

“At Crystal Dynamics, we continually push ourselves to try and master the craft of storytelling through art, animation and innovation,” said Noah Hughes, Franchise Creative Director at Crystal Dynamics. “Our Crystal Dynamics 25th Anniversary game bundle provides an awesome sampling of that creativity.  We’re confident that longtime fans as well as new players will jump at the opportunity to play all of this amazing history in a single download while contributing to children’s hospitals through our partnership with GameChanger.”

Last year’s hit Rise of the Tomb Raider® 20 Year Celebration received over 100 awards and nominations and is one of the highest rated games on next generation systems.  The studio has developed and published more than 30 award-winning titles over its 25-year history, including Gex™, Legacy of Kain, and Tomb Raider. The studio is currently hard at work on the highly anticipated ‘Avengers’ project, which was announced earlier this year.

About GameChanger
GameChanger Charity's mission is to leverage technology and innovation to ease the pain and suffering of children facing life-threatening illnesses. GameChanger delivers meaningful services directly to patients & staff in hospitals, awards financial aid & college scholarships, creates technology & solutions, gifts thoughtful packages of video games & toys and hosts unique gaming events for patients. Powered by the generosity of the gaming community, GameChanger processes over 100 tons of donated goods annually, hosts online gaming events with celebrities, launches custom digital eCommerce campaigns & has brightened the lives of over 20,000 patients, family members & caregivers at 55+ hospitals with over 95% going to the cause. Founded in 2007, GameChanger was started by Jim Carol after witnessing the impact video games had on his son Taylor during a 5 year battle with Leukemia. To learn more, please visit gamechangercharity.org.

About Crystal Dynamics
Crystal Dynamics is the studio behind the critically acclaimed and world-famous TOMB RAIDER franchise, which has sold over 58 million copies worldwide. With over 30 video game titles released and hundreds of awards, the heroine Lara Croft has been a cultural icon for 20 years and has made an indelible mark on virtually every facet of entertainment. The most recent release, Rise of the Tomb Raider, has received over 100 awards and nominations and is one of the highest rated games on next generation systems.

About TOMB RAIDER
The TOMB RAIDER franchise has sold over 58 million copies worldwide and inspired one of the most successful video game film adaptations in history, grossing over $300 million at the global box office with protagonist Lara Croft becoming a contemporary global icon. The most recent release in the world famous franchise, Rise of the Tomb Raider, was released for Xbox One and Xbox 360 on November 9, 2015 and on PC January 28, 2016, and Rise of the Tomb Raider: 20 Year Celebration was released for PlayStation®4 on October 11, 2016. The game has received numerous “Best of” nominations and is one of the highest rated games on next generation systems. All of this has made TOMB RAIDER once again a destination brand for action-adventure.

AVENGERS © 2017 MARVEL
© 2017 SQUARE ENIX. All Rights Reserved.
CRYSTAL DYNAMICS, DRAGON QUEST, EIDOS, FINAL FANTASY, GEX, LARA CROFT, LARA CROFT AND THE TEMPLE OF OSIRIS, LEGACY OF KAIN, PROJECT SNOWBLIND, RISE OF THE TOMB RAIDER, SQUARE ENIX, the SQUARE ENIX logo, SPACE INVADERS, TAITO, and TOMB RAIDER are registered trademarks or trademarks of the Square Enix group of companies. All other trademarks are the property of their respective owners.
Posted by Qwill at 6:45 AM