The IAFA William L. Crawford Fantasy Award Winner - All the Birds in the Sky by Charlie Jane Anders

The William L. Crawford Fantasy Award was presented at the 38th International Conference on the Fantastic in the Arts which was held March 22-26, 2017 at Orlando Airport Marriott Lakeside, Orlando, Florida.


The IAFA Crawford Award each year recognizes an outstanding new writer whose first fantasy book was published during the previous calendar year. It is not specifically a first novel award. The award was established with the support of the late Andre Norton, who also helped establish the criteria and who continued to support the award over the years. from the IAFA website

The Crawford Award Winner for a novel published in 2016 is Charlie Jane Anders for All the Birds in the Sky! 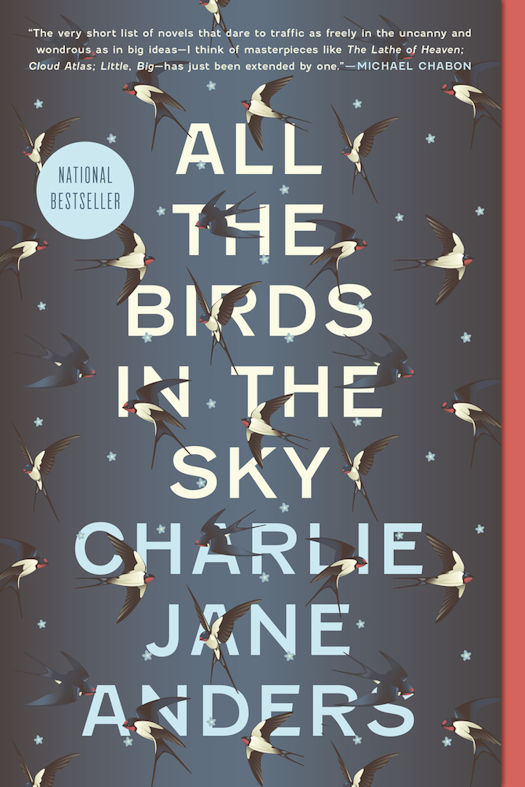 From the former editor-in-chief of io9.com, a stunning novel about the end of the world—and the beginning of our future

Childhood friends Patricia Delfine and Laurence Armstead didn't expect to see each other again, after parting ways under mysterious circumstances during middle school. After all, the development of magical powers and the invention of a two-second time machine could hardly fail to alarm one's peers and families.

But now they're both adults, living in the hipster mecca San Francisco, and the planet is falling apart around them. Laurence is an engineering genius who's working with a group that aims to avert catastrophic breakdown through technological intervention. Patricia is a graduate of Eltisley Maze, the hidden academy for the world's magically gifted, and works with a small band of other magicians to secretly repair the world's every-growing ailments. Little do they realize that something bigger than either of them, something begun years ago in their youth, is determined to bring them together—to either save the world, or plunge it into a new dark ages.

Charlie Jane Anders' All the Birds in the Sky is a deeply magical, darkly funny examination of life, love, and the apocalypse.

Patricia Delfine and Laurence Armstead are awkward pre-teens with parents who do not understand them. They barely understand themselves. Their lives intersect when they are in middle school (where horrible things happen). They are both captivating and interesting for entirely different reasons. Laurence is a person of science; Patricia is a person of magic. They are friends and not friends, but they always seem to have each other's backs in middle school. For years they don't see each other. They grow up and reconnect as the world is more and more falling apart - superstorms, famine, water wars, disease, etc. Patricia is a powerful witch who doesn't understand everything she can do yet despite her training, but is working to save the world. Laurence is a genius also working to save humanity through science. Obviously they have different approaches to what that means.

All the Birds in the Sky is deeply character-driven. Patricia and Laurence are such vibrant characters it seems that they could have carried the story on their own, but Anders populates their world with wonderful secondary characters that add layers of depth to the story, marvelous magic and cutting edge/weird science.

Anders writing is spellbinding - she transports you deeply into this fabulous story. All the Birds in the Sky has everything I look for in a novel - great writing, wonderful characters and a fascinating, deeply engaging story. I was upset when the book ended because I wanted more! All the Birds in the Sky is an exhilarating, exuberant, magical novel that I very highly recommend.

Originally posted here: Interview with Charlie Jane Anders and review of All the Birds in the Sky

Labels: All the Birds in the Sky, Charlie Jane Anders, Crawford Award, IAFA, International Association for the Fantastic in the Arts, Tor Books, William L. Crawford Fantasy Award
Email ThisBlogThis!Share to TwitterShare to FacebookShare to Pinterest