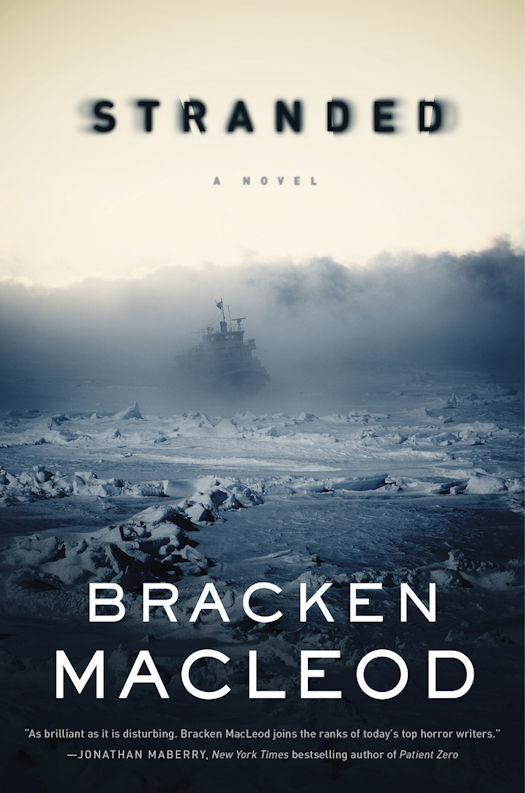 In the spirit of John Carpenter's The Thing and Jacob's Ladder comes Stranded -- a terrifying, icebound thriller where nothing is quite what it seems by Bracken MacLeod.

Badly battered by an apocalyptic storm, the crew of the Arctic Promise find themselves in increasingly dire circumstances as they sail blindly into unfamiliar waters and an ominously thickening fog. Without functioning navigation or communication equipment, they are lost and completely alone. One by one, the men fall prey to a mysterious illness. Deckhand Noah Cabot is the only person unaffected by the strange force plaguing the ship and her crew, which does little to ease their growing distrust of him.

Dismissing Noah's warnings of worsening conditions, the captain of the ship presses on until the sea freezes into ice and they can go no farther. When the men are ordered overboard in an attempt to break the ship free by hand, the fog clears, revealing a faint shape in the distance that may or may not be their destination. Noah leads the last of the able-bodied crew on a journey across the ice and into an uncertain future where they must fight for their lives against the elements, the ghosts of the past and, ultimately, themselves.

This is my first time reading Bracken MacLeod’s work. I like to dabble in thrillers from time to time to reset my reading palette. For me the Thriller genre is a big unknown. I don’t read the big names in the genre, and I don’t tend to read multiple books from one author in the genre. I like it this way. It keeps things fresh and mysterious. It keeps me on my toes while vacationing in this unfamiliar environment.

MacLeod does a fantastic job with his descriptive detail. I immediately felt submerged in his world of the open ocean and later the frozen wasteland we find our protagonist in. It opens in a storm at night and we get a real sense of what the characters have to do to survive in these harsh conditions. It also immediately tells you as a reader that the environment is never going to be friendly or pleasant.

MacLeod brings his characters alive just as fast as we quickly learn how much every member on the Arctic Promise hates Noah Cabot. It takes some time to learn what our protagonist did to make everyone so mad. MacLeod is a patient man and releases information slowly to the reader. I enjoy this skill as a writer, since it takes skill to know when to give out information at the right moments in the book. The Antagonist of the book is a double billing between Mother Nature and her harsh conditions and Noah’s father-in-law and Captain of the Arctic Promise, William Brewster. No one hates Noah more than William. This is one of the secrets that MacLeod takes his time unfolding, which only leads to more secrets. MacLeod does a masterful job at connecting his characters to the reader. There’s at least one or two things about each of the men in the book that you can find some similarity to.

I would really like to tell you more about the plot of the book and its many mysteries, but, since it’s a thriller, I really don’t want to ruin anything for you. So I will say it starts off with Noah and his crew mates on a job to resupply an oil platform in the norther sea above Russia when their ship becomes trapped in ice. Then, things start happening.

My one warning to people looking to read this book is about pacing. It starts off slow the first 200 pages and then really takes off the last 100. I really didn’t mind the slow build as it does wonders in connecting to characters and getting a feel for the world before all the action. However, I hear from a lot of people how much they dislike slow books, so I feel obligated to alert you to this fact.

My only problem with the book is the lack of female characters. I know being a sailor and working on oil platforms is physically challenging work, but I would have enjoyed see more diversity in the characters. It would definitely add the story by offering different view points.

Stranded by Bracken MacLeod is a solid thriller ride through a frozen sea. It builds to a stunning conclusion. I would only recommend this book to adults as there is adult language used throughout and at times graphic violence as well as some very frightening scenes. For anyone that likes a thrill ride in their books with a strong environmental presence and solid character development, I would pass this book on to them.