Please welcome Caitriona Lally to The Qwillery as part of the 2017 Debut Author Challenge Interviews. Eggshells was published on March 14th by Melville House. 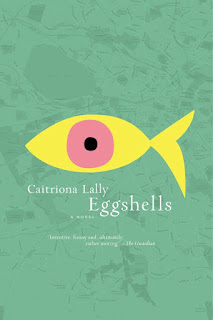 Caitriona:  Like most writers, I spent a lot of my childhood reading and making up extremely derivative stories in copybooks, based very closely on what I had just written. The words “THE END” written in bubble writing would make up a large proportion of the story. Then I fell out of the habit as I grew into the teenage years, and it wasn’t until my early 30s that I did an evening class in creative writing, which got me back into inventing stuff. I realised I found the short story form difficult so I decide to try my hand at writing a novel. And that’s when Eggshells came about.

Caitriona:  I’m a pantser. Not by choice, I just struggle with plotting. Any time I’ve tried to plan which way the story will go, the character seems to take on a life of its own as I get further into the story, and pushes the plot in a different direction. Eggshells is more character-driven than plot-driven, so I just followed the character’s adventures and wanderings around Dublin.

Caitriona:  Probably finding the time to write, or more accurately, forcing myself to make the time to write. Eggshells was my first novel and I squeezed in the writing of it around a full-time job. Now I’m working early mornings and I find that doing interviews and other writing work with tighter deadlines tend to take precedence over the main work of writing my second novel. When you’re tired, you tend to prioritise work with immediate deadlines, so motivation to put the novel-writing first is my biggest challenge.

Caitriona:  My childhood and adult reading. My interest in fairytales and mythology comes through in my book. And my obsession with maps – walking and mapping my character’s routes around Dublin came from my love of maps. I struggle to understand maps in a practical way, but I love looking at them as imaginative works.

Caitriona:  Misfit Vivian, who believes she’s a changeling, walks Dublin’s streets looking for a portal to another world where she thinks she’ll belong

TQ:  Tell us something about Eggshells that is not found in the book description.

Caitriona:  I had never had anything published before I wrote Eggshells, so it felt like a leap in the dark. I had tried – and failed – to get short stories, essays, articles published, and had nothing but rejection so I decided to write something longer that would feel like an achievement in itself, even if it never got published. So eventually seeing my name on the cover of a book was extremely exciting!

TQ:  What inspired you to write Eggshells? What appealed to you about writing a genre bending novel?

Caitriona:  I didn’t set out to write a genre-bending novel; in fact I didn’t realise that Eggshells could be called that until I read your question! I didn’t think about genres when I started writing, I just followed the voice of Vivian and concocted adventures and walks and plans for her as I went along. I had been made redundant from my job during the recession in Ireland, and spent a year job-hunting and walking aimlessly around the city – and Vivian came from this time, this sense of not belonging, of seeking something that was difficult to find: in my case a job, in her case a portal to another world.

TQ:  What sort of research did you do for Eggshells?

Caitriona:  Vivian walks pre-planned routes around Dublin to magical-sounding places in an attempt to find a portal to the otherworld. I scoured atlas indexes and maps of the city to source fairytale-like places. Then I walked all her walks around the city and took notes of buildings and street signs with letters missing (which Vivian believes could form patterns or codes which would lead her to another world). Then when I got home, I plotted the routes of my walks on an old map to see what kind of shape I walked – exactly what Vivian does.

Caitriona:  The background is a map of Dublin, which I’m thrilled with – I love maps and I think it helps to put Vivian’s walks in context, for readers outside of Dublin. In the centre is an image of Lemonfish, a slightly poorly goldfish missing a few scales that Vivian adopts. And in the centre of Lemonfish is a liquorice allsort, the pink toilet roll (Vivian has a bit of a sweet tooth).

TQ:  In Eggshells who was the easiest character to write and why? The hardest and why?

Caitriona:  I’m going to say Vivian for both, if that doesn’t count as cheating . . Vivian was in some ways easy to write because her personality and her unorthodox way of viewing the world helped to drive the story on. Her strange reactions to normal situations was the driving force of the novel. But she was also difficult to write because of the intensity of inhabiting her mind. She doesn’t have “normal” social interactions with people, she doesn’t do usual things like exercise or meeting friends for a drink or go to work, and so without such common social interactions, she was a very intense character to write.

Caitriona:  I didn’t deal directly with social issues because I hate being preached to in fiction, but I think the theme of not belonging, loneliness, how society treats misfits has crept into the novel through how Vivian is viewed by other people. I suppose being unemployed, I was feeling left out of a society that seemed to value work and money above all else, and Vivian embodies this lack of conforming too. It was something that was on my mind and I haven’t made any major points or come to any conclusions, but not belonging is a theme that runs through Eggshells.

TQ:  Which question about Eggshells do you wish someone would ask? Ask it and answer it!

Caitriona:  Why isn’t there a description of Vivian’s appearance in the book?

I deliberately avoided describing Vivian’s physical appearance because I got fed up of reading about beautiful women’s reflections in mirrors, or as described by others. I wanted readers to imagine for themselves what she looks like. Vivian has covered all the mirrors in the house, and the books is seen through her eyes, so there isn’t an opportunity for a description of her to creep in.

TQ:  Give us one or two of your favorite non-spoilery quotes from Eggshells.

“I wake on a damp pillow; my dreams must have leaked.”

“I don’t know how a pouch of sweets differs from a bag, but I suspect there are kangaroos involved.”

Caitriona:  I’ve a very rough first draft of my second novel just about finished and am trying to edit that now and put some kind of structure on it. It will take another few months before it can be shown to anybody. This one is set in Germany and I have two narrators which is a nice change after the intensity of living in Vivian’s head.

Caitriona:  Thank you for having me, nice questions! Slán agus beannacht. 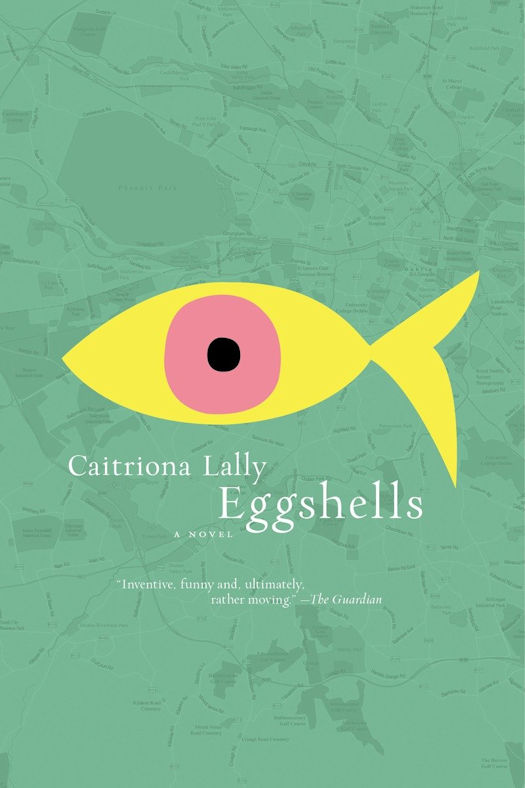 Vivian doesn’t feel like she fits in — and never has. As a child, she was so whimsical that her parents told her she was “left by fairies.” Now, living alone in Dublin, the neighbors treat her like she’s crazy, her older sister condescends to her, social workers seem to have registered her as troubled, and she hasn’t a friend in the world.

So, she decides it’s time to change her life: She begins by advertising for a friend. Not just any friend. She wants one named Penelope.

Meanwhile, she roams the city, mapping out a new neighborhood every day, seeking her escape route to a better world, the other world her parents told her she came from.

And then one day someone named Penelope answers her ad for a friend. And from that moment on, Vivian’s life begins to change.

Debut author Caitriona Lally offers readers an exhilaratingly fresh take on the Irish love for lyricism, humor, and inventive wordplay in a book that is, in itself, deeply charming, and deeply moving. 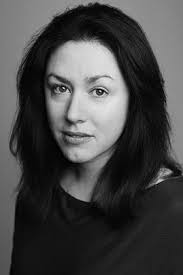 CAITRIONA LALLY studied English Literature in Trinity College Dublin.  She has had a colorful employment history, working as an abstract writer and a copywriter, as well as a home helper in New York and an English teacher in Japan. She has traveled extensively around Europe, Asia, the Middle East, and South America.  Caitriona was shortlisted for “Newcomer of the Year” in the Irish Book Awards in 2015.