The promotional partnership includes the launch of Krispy Kreme’s first-ever digital shop and real-life Power Rangers doughnuts available now through April 2 at participating shops in the U.S. and Canada.

Available online at www.krispykreme.com/angelgrove, Krispy Kreme’s Angel Grove shop is a digital representation of the Krispy Kreme shop featured in the Power Rangers movie. Filmed using Matterport technologies, the shop allows fans worldwide to virtually experience the shop, filled with sneak peeks at scenes from the movie not yet seen.

“We have teamed up with Lionsgate to promote the Power Rangers film in a way that allows fans to experience Krispy Kreme in a totally new, unexpected way,” said Jackie Woodward, Chief Marketing Officer of Krispy Kreme Doughnuts. “The virtual opening of Krispy Kreme Angel Grove comes with the same passion and excitement experienced with a traditional Krispy Kreme shop grand opening.”

In addition to the virtual reality experience, fans can be part of the “Go Go” Grand Opening by:

Through April 2, participating Krispy Kreme locations throughout the United States and Canada are offering limited-time only Power Rangers doughnuts – a Kreme™- filled shell dipped in chocolate icing, sprinkled with edible silver glitter and decorated with lightning bolt candy pieces in blue, black, yellow, red and pink to match the colors of the Power Rangers’ suits. For more information, visit http://krispykreme.com/menu/Doughnuts/Power-Rangers-Doughnuts. 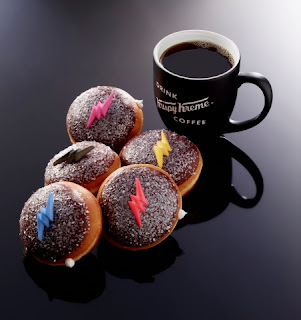 Saban’s Power Rangers follows five ordinary teens who must become something extraordinary when they learn that their small town of Angel Grove – and the world – is on the verge of being obliterated by an alien threat. Chosen by destiny, the film’s heroes quickly discover they are the only ones who can save the planet. To do so, they have to overcome their real-life issues and before it’s too late, band together as the Power Rangers. For more information, visit http://www.powerrangers.movie.
About Krispy Kreme Doughnut Corporation

Krispy Kreme Doughnut Corporation is a global retailer of premium-quality sweet treats, including its signature Original Glazed® doughnut. Headquartered in Winston-Salem, N.C., the Company has offered the highest-quality doughnuts and great-tasting coffee since it was founded in 1937. Krispy Kreme Doughnuts is proud of its Fundraising program, which for decades has helped non-profit organizations raise millions of dollars in needed funds. Krispy Kreme doughnuts can be found in approximately 12,000 grocery, convenience and mass merchant stores in the U.S. The Company has more than 1,200 retail shops in 30 countries. Connect with Krispy Kreme Doughnuts at www.KrispyKreme.com, or on one of its many social media channels, including www.Facebook.com/KrispyKreme, and www.Twitter.com/KrispyKreme.

One of the largest independent television businesses in the world, Lionsgate’s slate of premium quality series encompasses nearly 90 shows on more than 40 different networks. These include the ground-breaking Orange is the New Black, the fan favorite Nashville, the syndication success The Wendy Williams Show, the hit drama The Royals, the acclaimed Casual, the breakout success Greenleaf and hit STARZ series including Outlander, Black Sails, Survivor’s Remorse and Power, the second highest-rated premium pay television series of 2016.

Lionsgate's home entertainment business is an industry leader in box office-to-DVD and box office-to-VOD revenue conversion rates. Lionsgate handles a prestigious and prolific library of more than 16,000 motion picture and television titles that is an important source of recurring revenue and serves as a foundation for the growth of the Company's core businesses. The Lionsgate, Summit Entertainment and Starz brands are synonymous with original, daring, quality entertainment in markets around the world. www.lionsgate.com