I apologise in advance if I start typing mmmmm as I write this. Today has been one of those days required post work chocolate and the sweetie of choice is M&Ms. I am stuffing my face with peanut M&Ms as I write this so my fingers may end up typing the odd errant M in between shoving this chocolaty treat into my mouth. So what did M read? 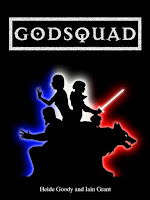 Hilarity abounded this week as I enjoyed book 3 of the Clovenhoof series by Heide Goody and Iain Grant. No Jeremy this time. What you say? No Jeremy Clovenhoof everyone's favourite former Prince of Hell? That's right no Jeremy. This story starts in the Celestial City and everyone is in an uproar as a being named Simon has been discovered in Toulon. That might not sound very unusual but Simon has no soul. Even more odd is that Simon is looking for Mary (aka Mother Mary, mother of Jesus). No one has heard from Mary in decades so it is up to Joan of Arc, St Francis and St Christopher to go down to earth to find Mary and solve the mystery of the souless Simon. Sounds simple enough but nothing is ever as easy as it seems especially when 3 of Heaven's B or possibly C team are sent down to Earth to find Mary. It's almost mission impossible for this hapless trio. From the red light district of Amsterdam to the Louvre in Paris and down to Toulon this celestial squad try to best to navigate modern culture, to hilarious results in their search of Mary and a way to stop Armageddon.

I didn't think it was possible for a book in this series to be funny without Jeremy in it. I was wrong. Godsquad is HILARIOUS. Perhaps the teeny tiniest not as funny as the books with Jeremy in them but very, very funny indeed. I especially enjoyed the chapter involving the training course that Joan, Francis and Christopher had to attend to prepare themselves for earth hundreds of years after they had last been there. I am not sure how the writing duo of Goody and Grant do it. How is it so funny book after book? I was lolling and rolfing all the way into work. Yet again I highlighted so many sections of this book that it would take several pages to tell you all about them. I think you could easily read this as a standalone story. Get it, read it asap!

I thought I better give my stomach a break from all the lolling and discovered that the final instalment of the Night Prince series was available. Into the Fire by Jeaniene Frost wraps up the story of Vlad and Leila. After the horrific events of the previous book Leila is still left magically connected to Vlad's enemy Mircea. If he is hurt, she is hurt. If he dies she dies. A powerful necromancer is involved who Vlad and Leila need to find before Leila pays the ultimate price.

I am glad that Frost decided to wrap up this series. While I don't mind a bit of PNR to talk my mind off 'real life' I probably shouldn't have followed the Clovenhoof books with Into the Fire. I just found that I didn't really care what happened to Leila and all the charred bodies and exploding heads got to be a bit dull in the end. There were a number of points where I wished Jeremy Clovenhoof would come trotting into the scene and do something outrageously funny rather than reading another chapter where it was OK if Vlad killed someone as long as he loved. I am sure that fans of this series will be sad to see these characters go whereas I am left feeling a bit disappointed that this instalment feels like the story was dragged out a bit too long.


That is it for me this week. I am going to try to mix my reading up a bit this week. I won't commit to not reading any Clovenhoof though!. Until next week happy reading. 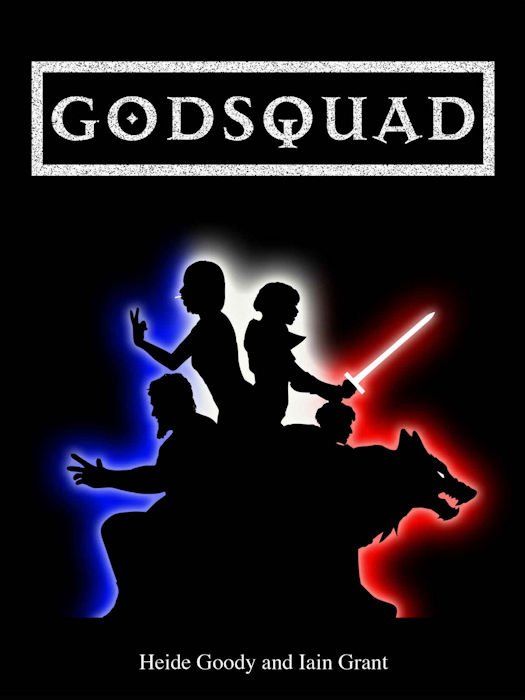 The Team:
Joan of Arc, the armour-plated teen saint of Orleans.
Francis of Assisi, friend to all the animals whether they like it or not.
St Christopher, the patron saint of travel who by papal decree has never existed – no matter how much he argues otherwise.

The Mission:
An impossible prayer has been received by Heaven and it’s a prayer that only Mary, Mother of God, can answer. Unfortunately, Mary hasn’t been seen in decades and is off wandering the Earth somewhere. This elite team of Heavenly saints are sent down to Earth to find Mary before Armageddon is unleashed on an unsuspecting world.

Godsquad:
A breathless comedy road trip from Heaven to France and all points in-between featuring murderous butchers, a coachload of Welsh women, flying portaloos, nuclear missiles, giant rubber dragons, an army of dogs, a very rude balloon and way too much French wine. 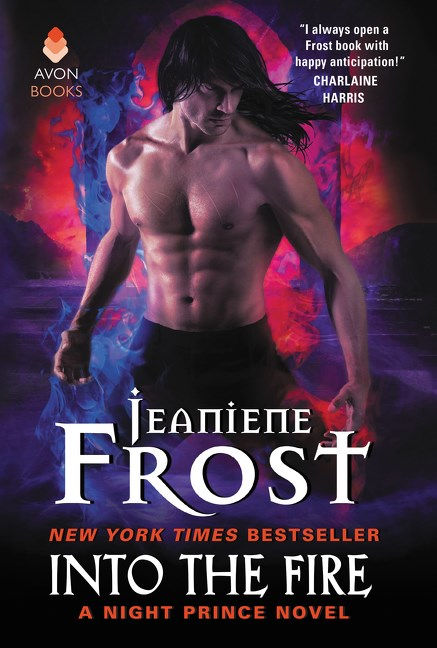 In the explosive finale to New York Times bestselling author Jeaniene Frost’s Night Prince series, Vlad is in danger of losing his bride to an enemy whose powers might prove greater than the Prince of Vampires’ . . .In the wrong hands,  love can be a deadly weapon

For nearly six hundred years, Vlad Tepesh cared for nothing, so he had nothing to lose. His brutal reputation ensured that all but the most foolhardy stayed away. Now, falling in love with Leila has put him at the mercy of his passions. And one adversary has found a devastating way to use Vlad’s new bride against him.

A powerful spell links Leila to the necromancer Mircea. If he suffers or dies, so does she. Magic is forbidden to vampires, so Vlad and Leila enlist an unlikely guide as they search for a way to break the spell. But an ancient enemy lies in wait, capable of turning Vlad and Leila’s closest friends against them . . . and finally tearing the lovers apart forever.