Clutter Magazine are proud to announce their latest project with Huck Gee. 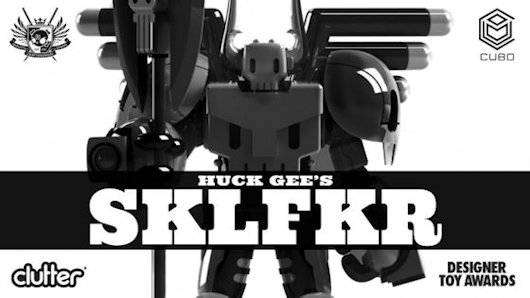 
Clutter and The Designer Toy Awards are excited to
announce a brand-new project with Toy of the Year
2015, and Artist of the Year 2015 DTA winner, Huck Gee!
Introducing – SKLFKR!! 20 inches of mecha, skull-laden,
robotic awesomeness!

As part of winning those prestigious DTA awards, Huck was provided a sponsorship to work with 3D printing technology to bring to life a brand new creation. Huck wasted no time and went to work. What came back blew us away!


"The mission of the DTA's is to celebrate and honor the art of designer toy creators all over the world. When we helped arrange this sponsorship for the winner of Artist of the Year we didn’t know what would be created - Huck Gee jumped on this opportunity and brought it to a new level! Seeing the SKLFKR come to life over the last year has been an amazing journey." - Miranda O'Brien (Clutter & the DTA's)

To make this dream a reality we partnered with 3D sculpting and printing masters, CUBO – the only team we knew could pull this off. Helping us bring this massive project to reality, Cubo 3D sculpted, rendered and printed this mighty beast. Not only that, they engineered and constructed a series of 3D printed gaskets in order to joint the SKLFKR and give it 7 points of articulation!!

Literally standing at 20" tall, this piece will be cast in resin and hand assembled here in NYC by Clutter Studios. More release information will be announced soon.

Over a year in the making and it's a Giant!


"Because mechs and laser beams. Because skulls, spikes and giant axes. Because destroy. Because crushing it. Because SKLFKR." - Huck Gee

As part of its release into the world, Five Points Festival is giving away the very special first pull of this monumental release! To enter the competition visit the Facebook Page here. Good Luck!! 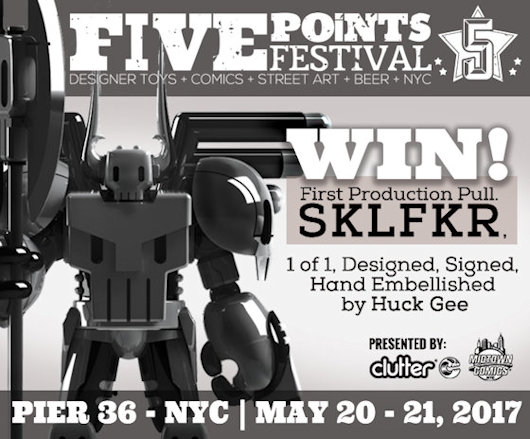 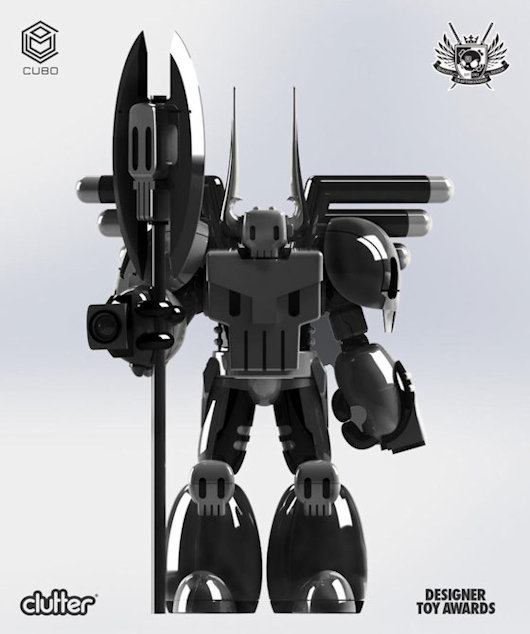 Huck Gee is a contemporary artist, illustrator, designer, and toy maker based in San Francisco, California.

Huck is a driving force in the world of ‘Art Toys’ and is widely known for the amazing worlds of toys that he develops. He hand crafts small runs of handmade figures that sell out instantly online to a global clientele. His production toy designs have brought him international acclaim and are highly prized. Huck’s artwork has been exhibited in galleries worldwide, he has consigned pieces for Christie’s Auction House and has a design in the permanent collection of the Museum of Modern Art in NYC. In addition, he has journeyed on numerous international signing tours and has had his art published in an ungodly amount of books and magazines.

Cubo is a 3D scanning and 3D modeling service in the NYC area. Using 3D printing we bring your ideas to life. If you can dream it and draw it, we can print it.

About the Designer Toy Awards:

The Designer Toy Awards (DTAs) are the leading awards honoring excellence and innovation in the Designer Toy art field. Established in 2011, the DTAs are presented by Clutter Magazine— a leading informational organization within Designer Toys, a community that after more than a decade has become a prominent and legitimate form of artistic and commercial expression as well as a leader in global trendsetting.

Reflecting the tremendous and ongoing growth of the Designer Toy community, the DTAs celebrate the best of the industry’s artists, designers, and brands, as well as honoring those involved in championing Designer Toys throughout the world. Members of the DTA Board select the majority of finalists and winners in each category from the nominees, however, you — the online community — determine finalists and, in some cases, winners by voting for nominated work, individual or brand that you believe to be the best in each category. Each year, the DTAs bring together the Designer Toy community all over the world.

Since 2004, Clutter has been the go-to destination for creatives, companies and collectors, providing regular in-depth trend analysis directly from the vinyl frontier where fine art meets fine artifacts.

The world’s premiere source for counterculture and art toy information, Clutter brings neo-pop, dark surrealist, and street artist collectible figures, to our dedicated readership who rely on us to keep them informed on what they care about most.

With a high-quality, FREE, monthly print magazine, dynamic online portals, an art gallery, and the first industry-established annual award ceremony, Clutter is the catalyst for a uniquely active and vocal community engaged in the serious business of work and play.