Tickets on Sale Now for ‘Doctor Who: Season 10 Premiere’

Tickets on Sale Now for ‘Doctor Who: Season 10 Premiere,’ Starring Peter Capaldi and Pearl Mackie, in Cinemas for Two Nights This April 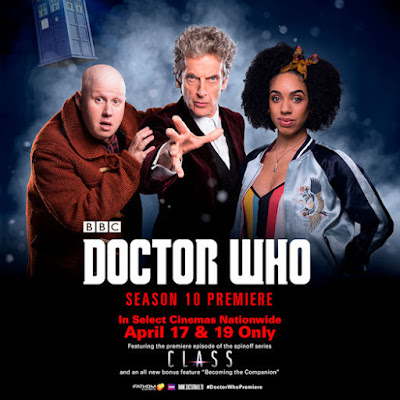 In addition to the feature content, audiences will enjoy the premiere episode of the Doctor Who spinoff series Class, featuring a guest appearance by the Doctor himself, Peter Capaldi, and the never-before-seen bonus feature Becoming the Companion, in which fans will travel with new companion Pearl Mackie from the London stage through the doors of the TARDIS to a once-in-a-lifetime role, or as Pearl says, “the most insane thing that's ever happened to me.” The bonus feature includes exclusive interviews with Pearl Mackie, Peter Capaldi, and Steven Moffat, and is narrated by Ingrid Oliver.

Tickets for “Doctor Who: Season 10 Premiere” can be purchased online by visiting www.FathomEvents.com or at participating theater box offices. Fans throughout the U.S. will be able to enjoy the event in more than 550 select movie theaters. For a complete list of theater locations visit the Fathom Events website (theaters and participants are subject to change).

Season 10 will see Peter Capaldi embark on his thrilling final series as the Twelfth Doctor as well as the introduction of brand new companion Pearl Mackie as Bill Potts and the return of alien companion Matt Lucas as Nardole. Fantastic adventures and terrifying monsters await the team of heroes as they journey through space and time in this latest instalment of the globally-renowned drama. Expect laughter, danger, and exhilarating escapades in this final season under the helm of lead writer and executive producer Steven Moffat.

With Hot Topic as the official retail partner of the Doctor Who: Season 10 Premiere cinema event, attendees can bring in their ticket stub or proof of purchase to Hot Topic retail locations for 25% off Doctor Who merchandise, valid March 10 – May 6, 2017.

These partnerships along with the Fathom Events presentation is all brought together through licensing deals with BBC Worldwide North America.

Fathom Events is recognized as the leading domestic distributor of event cinema with participating affiliate theaters in all 100 of the top Designated Market Areas®, and ranks as one of the largest overall distributors of content to movie theaters. Owned by AMC Entertainment Inc. (NYSE: AMC), Cinemark Holdings, Inc. (NYSE: CNK) and Regal Entertainment Group (NYSE: RGC) (known collectively as AC JV, LLC), Fathom Events offers a variety of one-of-a-kind entertainment events such as live, high-definition performances of the Metropolitan Opera, dance and theatre productions like the Bolshoi Ballet and National Theatre Live, sporting events like Copa America Centenario, concerts with artists like Michael Bublé, Rush and Mötley Crüe, the yearlong TCM Big Screen Classics film series and inspirational events such as To Joey With Love and Kirk Cameron’s Revive US. Fathom Events takes audiences behind the scenes and offers unique extras including audience Q&As, backstage footage and interviews with cast and crew, creating the ultimate VIP experience. Fathom Events’ live digital broadcast network (“DBN”) is the largest cinema broadcast network in North America, bringing live and pre-recorded events to 896 locations and 1,383 screens in 181 DMAs. For more information, visit www.fathomevents.com.

BBC Worldwide North America is the main commercial arm and wholly-owned subsidiary of the British Broadcasting Corporation (BBC) operating in the U.S. and Canada. The company exists to maximize the value of the BBC’s assets for the benefit of the UK license payer and invests in public service programming in return for rights. The company operates four businesses in the territory – linear and digital content sales and co-productions, consumer products, BBC.com, and two studios based in Los Angeles – BBC Worldwide Productions, responsible for the smash hit Dancing with the Stars and the limited series The Night Of; and Adjacent Productions, producers of Life Below Zero and Ladies of London, among others. The company also owns a 50.1% share in cable channel BBC AMERICA through a joint venture with AMC Networks. 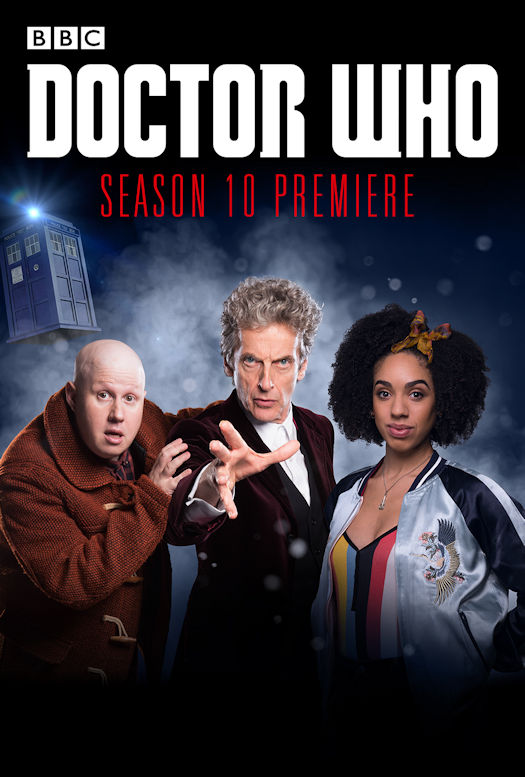