Interview with Renee Macalino Rutledge, author of The Hour of Daydreams


Please welcome Renee Macalino Rutledge to The Qwillery as part of the 2017 Debut Author Challenge Interviews. The Hour of Daydreams was published on March 14, 2017 by Forest Avenue Press. 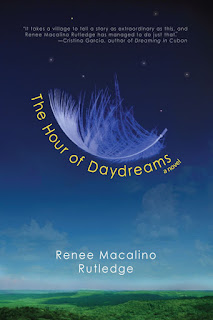 Renee:  The first time I wrote a complete piece, on my own initiative, I couldn’t have been older than 6 or 7. It came to me while outside in the yard, and I was conscious of being there and alive and deeply moved by the fact. I wrote a poem as a response to and interaction with a moment of awareness. It sounds profound, but the poem was about rainbows and flowers, the weather. It rhymed, so brownie points for that.

Renee:  I was a hybrid while writing The Hour of Daydreams. I had a general idea where I was going at the start of each chapter, at the end of which I’d have an idea where I’d go in the next chapter. But some of my favorite parts are those that came to me unannounced and seemed to write themselves, like a ribbon unraveling. Chapter 4 was like that, and Chapter 24. Lately I’ve been a pantser, writing memoir fragments inspired by my essays. I think it really depends on the project.

Renee:  Finding time to write. I have a day job and freelance work, and my kindergartener isn’t in daycare. I pick her up right after school, and after that, any chance of writing is snuffed out until she goes to bed. I take a notebook with me everywhere to jot things down, and I write text messages to myself all the time.

Renee:  Reading always fires me up to write. The possibilities of language, the power of voice. I love being swept into a story and feeling my world expand after reading. It inspires me to create stories of my own. People inspire me—if you talk to anyone long enough, you begin to discover their idiosyncrasies and what make them tick. You begin to find connection and develop empathy and see patterns of human connectivity, which to me, is the work of fiction. History inspires me, the desire to understand and learn from it.

TQ:  Describe The Hour of Daydreams in 140 characters or less.

Renee:  The Hour of Daydreams imagines the history of two characters in a Filipino folktale. What were their secrets, and who did they impact with them?

TQ:  Tell us something about The Hour of Daydreams that is not found in the book description.

Renee:  There’s a scene from the book that’s inspired by an embarrassing moment that took place between my husband and me. He loves telling the story, so I figured it would be okay to add. The couple that relives that moment is not Tala and Manolo, my protagonists, but Manolo’s parents, Andres and Iolana.

TQ:  What inspired you to write The Hour of Daydreams?

Renee:  The Filipino folktale, The Star Maidens. It’s about a man who steals a star maiden’s wings so that she cannot fly away, and he marries her. In the end, she finds her wings and leaves him. This left me with more questions than answers and the desire to tell their story. It also gave me the opportunity to explore interesting themes like marriage, identity, the legacies we leave, and the way in which stories are passed down.

TQ:  What sort of research did you do for The Hour of Daydreams?

Renee:  The book takes place in the Philippines, where I haven’t been since the age of four, so I googled a lot of random things about setting, like “Are there lions in the Philippines?” and “Are there shantytowns in the provinces?” and “Number of doctors in Philippine villages.” I made many phone calls to my parents and asked them lots of questions when I saw them. I also read some excellent books, like Eye of the Fish, a wonderful nonfiction narrative about the islands, by Luis H. Francia.

TQ:  Please tell us about The Hour of Daydreams' cover.

Renee:  Gigi Little, Forest Avenue Press’s designer, created the cover. It captures a beautiful time, at the intersection between day and night. It shows a feather, a hint at wings, falling from the sky. The feather, illuminated, is reminiscent of the moon. There are seven stars in the sky to symbolize seven sisters. Among the contrasts in my novel is that between city and country—and the sky on my front cover continues around to the back cover, where the green country landscape changes to a cityscape.

TQ:  In The Hour of Daydreams who was the easiest character to write and why? The hardest and why?

Renee:  Andres, at one point in the story, says, “Objects were simply objects, men were men, women were women. It was all so simple and for now—for the simple here and now—so divine.” His philosophy extends to him; he’s definitely a “what you see is what you get” kind of guy, so he was the easiest to write. Tala was the hardest. Her past is complicated, and it was a constant challenge to balance what to reveal and what to keep a mystery.

Renee:  It felt impossible to write a book about the Philippines without touching upon social issues like sex trafficking, guerilla warfare, poverty, and government corruption. This is the world where my characters live, and these are issues they live through, among others. I didn’t set out on purpose to cover these issues; it happened organically in the context of my storyline and my preoccupations as a writer and Filipino.

TQ:  Which question about The Hour of Daydreams do you wish someone would ask? Ask it and answer it!

Renee:  Why is my book called The Hour of Daydreams? In a chapter by that name, the hour of daydreams is the time when a grandfather tells his granddaughter stories. It is a very specific and special time for them. It is also representative of a moment of time at a river, when the main characters, Tala and Manolo, bear witness to one another, and their memories of this time begin to feel like dreams. Finally, it is representative of the hours between the book and the reader.

TQ:  Give us one or two of your favorite non-spoilery quotes from The Hour of Daydreams.

Renee:  “Without Grandfather Andres here to light a candle in my heart, I gaze at Papa differently, curious about the stories he hides, of the real woman and not the fairy tale, seeking her there in his hidden quiet. Without the stories, I realize there is nothing left.”

Renee:  Thank you so much for having me! 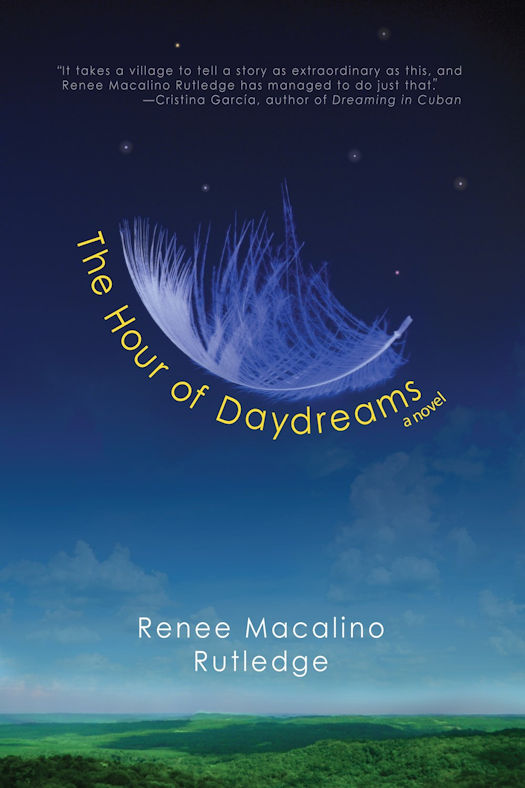 Manolo Lualhati, a respected doctor in the Philippine countryside, believes his wife hides a secret. Prior to their marriage, he spied her wearing wings and flying to the stars with her sisters each evening. As Tala tries to keep her dangerous past from her new husband, Manolo begins questioning the gaps in her stories—and his suspicions push him even further from the truth. The Hour of Daydreams, a contemporary reimagining of a Filipino folktale, weaves in the perspectives of Tala’s siblings, her new in-laws, and the all-seeing housekeeper while exploring trust, identity, and how myths can take root from the seeds of our most difficult truths.

Renee Macalino Rutledge was born in Manila, Philippines, and raised in the San Francisco Bay Area from the age of four. A long-time local journalist, her articles and essays have appeared in ColorLines, Filipinas Magazine, Oakland and Alameda Magazine, the San Francisco Bay Guardian, Literary Hub, Mutha Magazine, Ford City Anthology, Women of Color Anthology, and others. The Hour of Daydreams is her debut novel. She lives in Alameda, California, with her husband and two daughters.