Yesterday at Emerald City Comic Con in Seattle, Washington, Image Comics kicked off the show with a slew of exciting creator-owned announcements that set the comics and entertainment industry abuzz.

Image Comics revealed the following creator-owned projects set to launch in the coming year and beyond.

In DEATH OF LOVE, a bitter, self-proclaimed nice guy gains the ability to see the Cupidae, who are responsible for love in the world. Who he then ends up in bloody and, hopefully, hilarious war with.

DEATH OF LOVE launches from Image Comics this Fall 2017.

When an eight-year-old girl literally begins to transform into a tree, her single Mom, troubled brother, and possibly insane Grandfather embark on a bizarre and heart-wrenching odyssey across the back roads of America, desperately searching for a way to cure to her horrifying transformation before it’s too late.

But the further they get from home, and the closer the girl gets to completely losing her humanity, the more external forces threaten to tear the family apart as fanatical cults, mercenaries, and tabloid Paparazzi close in, determined to destroy the girl or use her for themselves.

A new genre-defying ongoing series, THE FAMILY TREE will combine mystery, action, and Cronenbergian body horror into an epic story about the lengths a mother will go to keep her children safe in the face of an increasingly unstable world and unspeakable horrors.

FAMILY TREE will launch this Fall 2017 from Image Comics.

In FLAVOR, Xoo’s a young chef in a closed-off metropolis whose economy surrounds the touring of—and some argue, exploitation of—young chefs. When she’s registered for the cooking tournament, she discovers the dark underbelly of the city—why they exploit the young chefs, where their foods coming from and why she’s got to fight against it all.

GENERATION GONE asks: What happens when three disenfranchised millennials who were already planning to rob a bank get superpowers? What happens when two of them are in a toxic relationship that implodes shortly after? Think Unbreakable meets Eternal Sunshine of the Spotless Mind and you're starting to get it.

MAGE: THE HERO DENIED is the long-awaited conclusion of Matt Wagner’s epic fantasy trilogy. MAGE follows the adventures of the reluctant everyman hero Kevin Matchstick who, after encountering a shaggy and beguiling wizard, discovers he is the reincarnation of the legendary Pendragon and able to wield the power of the mystical weapon, Excalibur.

MAGE will hit stores this Summer 2017 from Image Comics.


MOONSTRUCK
From Lumberjanes creator Grace Ellis and talented newcomer Shae Beagle comes a story of monsters, romance, and magical hijinks! Fantasy creatures are living typical, unremarkable lives alongside humans, and barista Julie strives to be the most unremarkable of all. Normal job, normal almost-girlfriend, normal... werewolf transformations that happen when she gets upset? Yikes! But all bets are off when she and her centaur best friend Chet find themselves in the middle of a magical conspiracy. Will Julie and Chet be able to save their friends? Is Julie's dogged determination to be normal a lost cause? Who's going to watch the coffee shop while our heroes are out saving the world?

These questions and more will be answered in MOONSTRUCK, coming this summer from Image Comics.

From Joe Casey and Ulises Farinas—they are the most kick-ass, head-banging heroes ever assembled! They are a precision strike force, ready to face any threat! They are a metal militia of mayhem and they mean serious business! If you like blood and explosions... or if you like bloody explosions... this is the book you've been waiting in line outside the coliseum to read! Their names are legend: The Mighty Kreig! Vandenborg Riot! Manowarrior! Steppenwulf! Beset from all sides by a growing roster of vicious foes, the New Lieutenants of Metal have arrived to bust down the doors of perception and deliver you to a greater comicbook glory! Featuring the first appearance of Spike!

NEW LIEUTENANTS OF METAL will launch from Image Comics in 2017.

In REDLANDS, three witches move to Redlands, Florida and take over as law enforcement.

The survivors of an ancient, supernatural race have woven their existence into the fabric of our society, and when their delicate balance of power begins to unravel, humanity itself is at risk of being torn apart. SACRED CREATURES is a supernatural thriller that reveals the hidden forces manipulating mankind and takes the reader on a journey spanning the history of the world itself.

SAVAGE TOWN is a crime story set in Limerick City, loosely based on real events at the turn of the millennium. It follows Jimmy ‘Hardy’ Savage as he fails his way up the criminal ladder.

SAVAGE TOWN will hit shelves this Fall 2017 from Image Comics.

After being betrayed by the bears that raised him, the legendary SHIRTLESS BEAR-FIGHTER wanders the forest he’s sworn to protect, fist-fighting bears, eating flapjacks, and being the angriest man the world has ever known! When wild-eyed, super-strong bears attack the citizens of Major City, Shirtless ventures into the human world to do what he does best...PUNCH THOSE BEARS IN THE FACE! But all is not as it seems. Someone is manipulating Shirtless...and only by confronting the demons of his past can Shirtless hope to save his future!

"Probably the most important comic book ever made." —Jody LeHeup

"We need him now more than ever. Someone's gotta fight all these bears!" —Sebastian Girner

In SLEEPLESS, an enchanted knight who never sleeps falls in love with the noblewoman he is sworn to protect as they navigate the treacherous court of a newly crowned king. Set in a Renaissance-inspired kingdom, politics and love abound in this historical romance drama.

SLEEPLESS will launch from Image Comics.

THE FAMILY TRADE is about a family of assassins, con men, and thieves dedicated to keeping their floating city floating. Which goes reasonably well until their youngest member manages to nearly cause the city to go to war with itself.

THE FAMILY TRADE will launch from Image Comics this Fall 2017.

In THE HARD PLACE, a former legendary getaway driver has decided that after five years in prison he’s ready to go straight, but when a bank heist goes wrong and two violent bank robbers recognize the driver, they force him to help them escape using a Russian mobster’s daughter as a human shield. The driver finds himself pursued by a resentful police department and hunted by every asset of the Russian mob.

THE HARD PLACE will launch from Image Comics this Summer 2017.


THE NEW WORLD
Fan-favorite creators Ales Kot and Tradd Moore come together for an all-new series, THE NEW WORLD.

THE NEW WORLD hits stores from Image Comics in 2017. 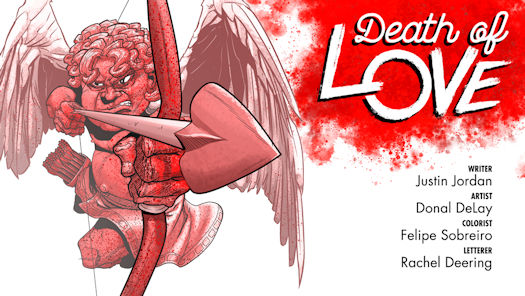 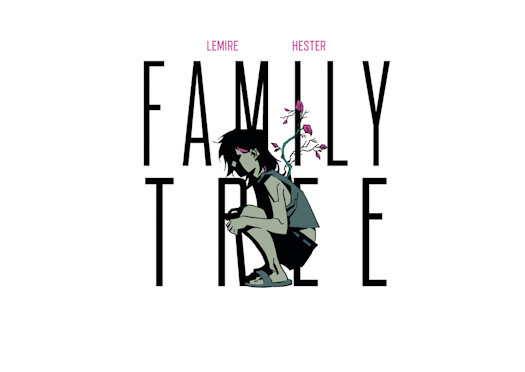 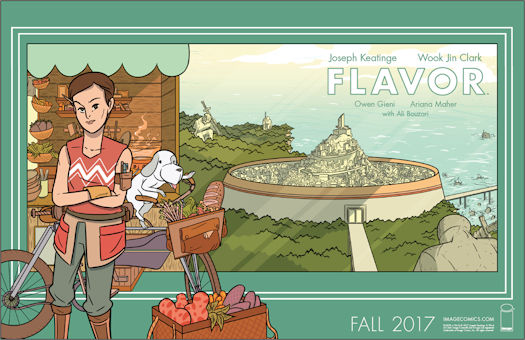 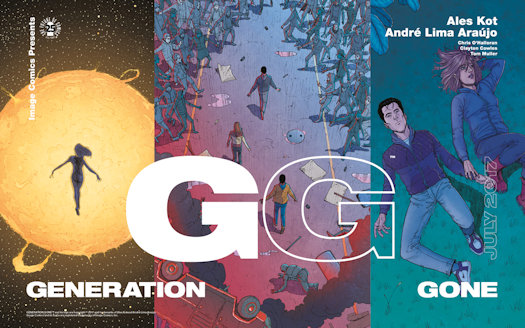 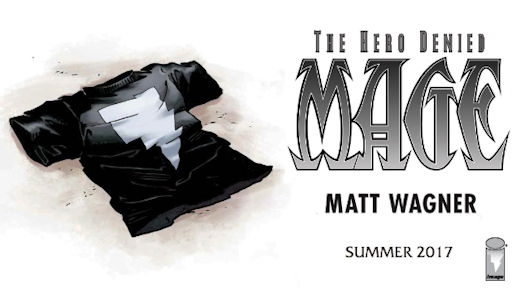 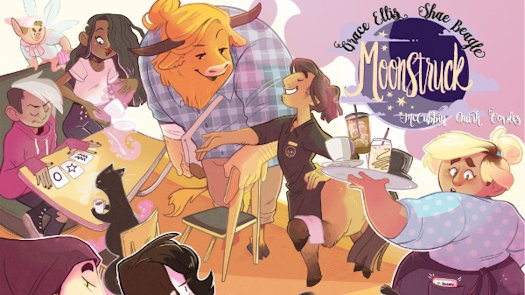 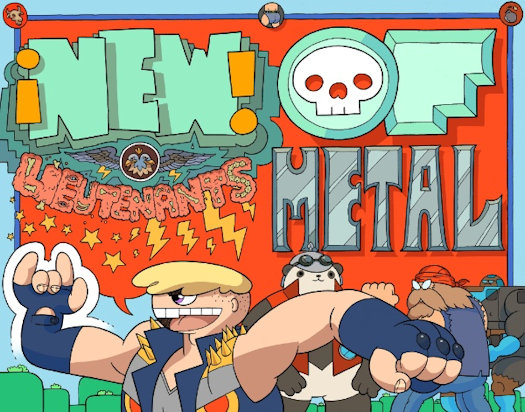 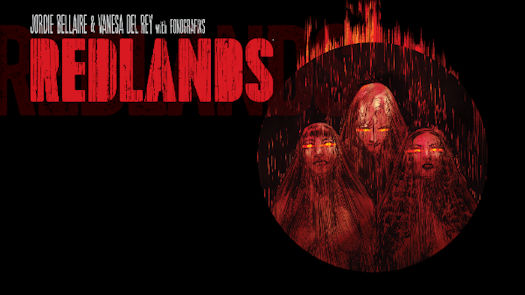 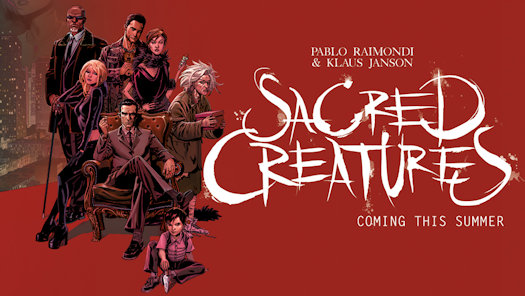 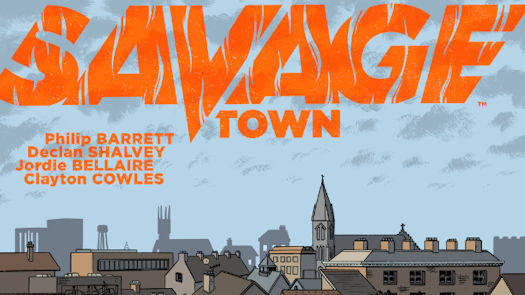 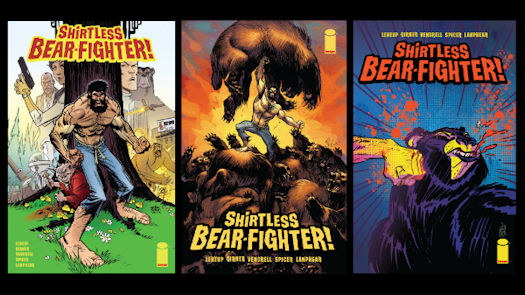 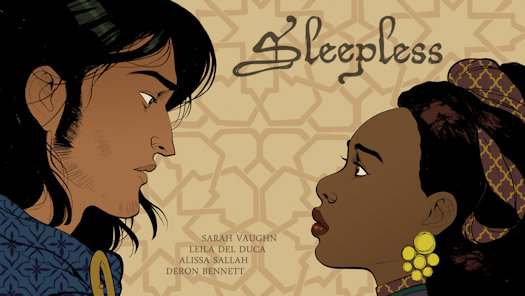 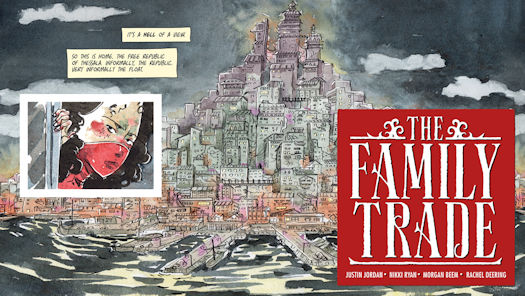 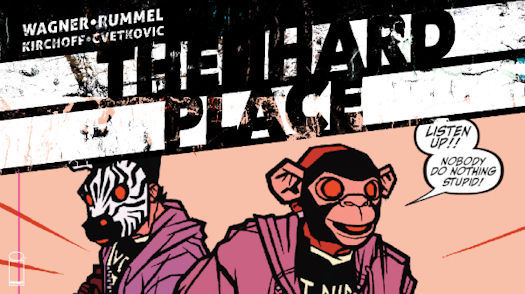 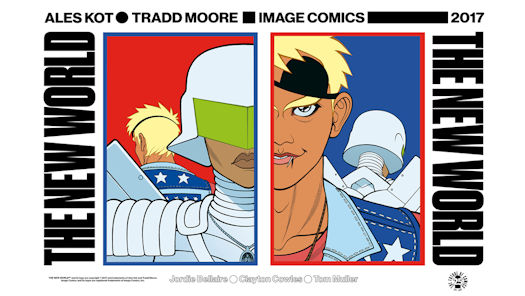