Cover Revealed: An Echo of Things to Come by James Islington


The cover has been revealed for the 2nd novel in James Islington's Licanius Trilogy - An Echo of Things to Come.

The jacket design is by Lauren Panepinto and the illustration is by Dominick Saponaro. 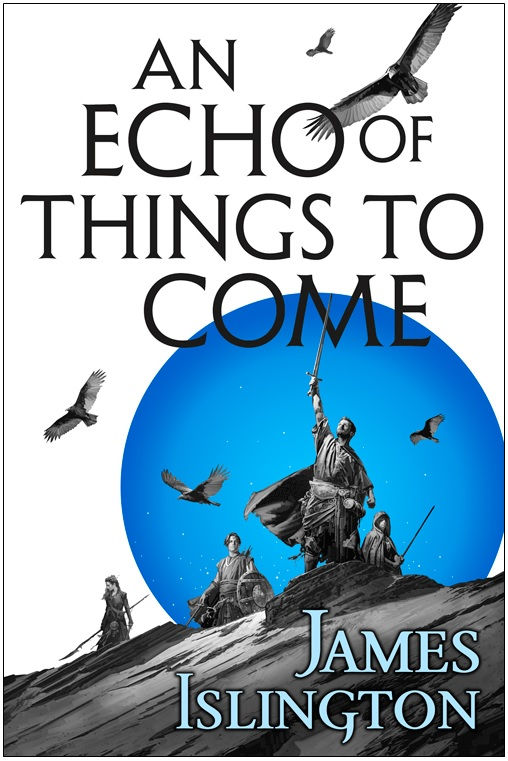 The second book in a glorious new fantasy trilogy by the next major force in commercial epic fantasy.

In the wake of the devastating attack on Ilin Illan, an amnesty has been declared for all Augurs - finally allowing them to emerge from hiding and openly oppose the dark forces massing against Andarra. However as Davian and his new allies hurry north toward the ever-weakening Boundary, fresh horrors along their path suggest that their reprieve may have come far too late.

In the capital, Wirr is forced to contend with assassins and an increasingly hostile Administration as he controversially assumes the mantle of Northwarden, uncovering a mystery that draws into question everything commonly believed about the rebellion his father led twenty years ago. Meanwhile, Asha begins a secret investigation into the disappearance of the Shadows, determined to discover not only where they went but the origin of the Vessels that created them - and, ultimately, a cure.

And with time against him as he races to fulfill the treacherous bargain with the Lyth, Caeden continues to wrestle with the impossibly heavy burdens of his past. Yet as more and more of his memories return, he begins to realise that the motivations of the two sides in this ancient war may not be as clear-cut as they first seemed...


The Shadow of What Was Lost
The Licanius Trilogy 1
Orbit, November 8, 2016
Hardcover and eBook, 704 pages

"Storytelling assurance rare for a debut . . . Fans of Robert Jordan and Brandon Sanderson will find much to admire." - Guardian

"Islington has built a world with all the right genre elements: complex magic, terrifying threats out of legend, political intrigue, and a large cast of characters whose motivations are seldom clear. Fans of doorstop epic fantasy will not be disappointed." - Publishers Weekly

"Will appeal to anybody looking for a coming-of-age fantasy tale with likeable characters and strong world building." - Fantasy Faction

As destiny calls, a journey begins.

It has been twenty years since the god-like Augurs were overthrown and killed. Now, those who once served them - the Gifted - are spared only because they have accepted the rebellion's Four Tenets, vastly limiting their powers.

As a Gifted, Davian suffers the consequences of a war lost before he was even born. He and others like him are despised. But when Davian discovers he wields the forbidden power of the Augurs, he sets into motion a chain of events that will change everything.

To the west, a young man whose fate is intertwined with Davian's wakes up in the forest, covered in blood and with no memory of who he is...

And in the far north, an ancient enemy long thought defeated begins to stir...

Labels: An Echo of Things to Come, cover reveal, James Islington, Licanius Trilogy, Orbit, The Shadow of What Was Lost
Email ThisBlogThis!Share to TwitterShare to FacebookShare to Pinterest