The Something Red Quadrilogy by Douglas Nicholas

Today marks the publication of the Three Queens in Erin, the 4th and final novel in the Something Red Quadrilogy by Douglas Nicholas. Douglas was featured in the 2012 Debut Author Challenge for his debut novel - Something Red.

Sadly Douglas passed away nearly a year ago. He was a remarkable writer of both poetry and prose. There is a deep beauty to his writing - exciting and melodic at the same time. His Something Red novels (and one short story) are gorgeous, lush and deeply engaging.

I've not yet read Three Queens in Erin (it showed up on my eReader early this morning). I am hesitant to read it because this will be the last time I read a novel by Douglas Nicholas for the first time; the last time I can immerse myself in a new part of his Something Red world. In lieu of a review of Three Queens in Erin (which I will write) here is information for all of the novels and my review of Throne of Darkness (Something Red 3).

You may read my interviews with Douglas here, here and here. 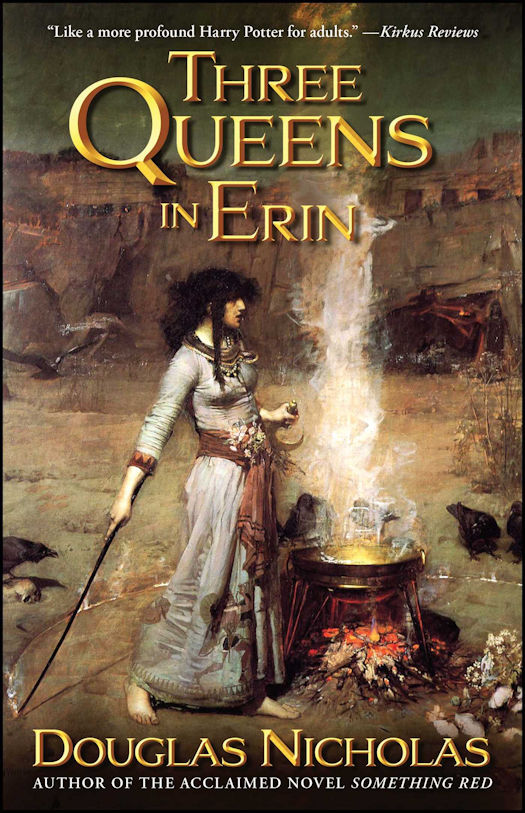 Maeve and her family - her granddaughter, Nemain; Nemain's husband, Hob; their six-year-old daughter, Macha Redmane; and Maeve's lover, Jack Brown - have decided it is time to return to Ireland and reclaim her tribal lands. Journeying over the sea, the family finally learns the secrets behind their long exile: a clan of Viking/Scots known as the Norse Gaels slayed the chief warrior and leaders of Maeve's clan through cunning black magic. But in returning to Ireland, Maeve and her family must face the three leaders of the Norse Gaels. These three queens, dark version of Celtic goddesses, are evil sisters whose abilities rival Maeve's own formidable powers...

When a monster is unleashed upon the countryside, Maeve and Nemain must create a beast of their own, at a cost of great sorcerous effort to themselves, With Nicholas' signature blend of historical adventure and supernatural fantasy, Three Queens in Erin is a rich addition to his critically acclaimed series. 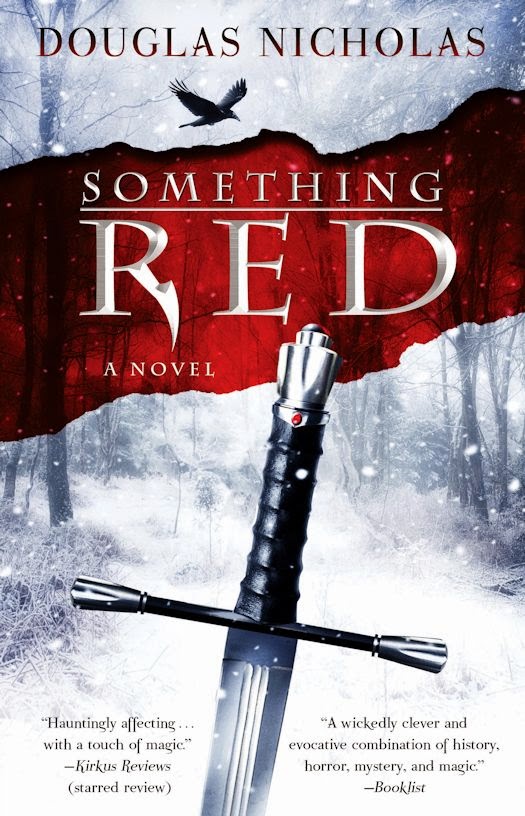 From debut novelist Douglas Nicholas comes a haunting fantasy of love, murder, and sorcery set in one of the coldest winters of thirteenth-century England.

In an intoxicating blend of fantasy and horror, acclaimed debut novel Something Red transports you to the harsh, unforgiving world of thirteenth-century England. An evil and age-old force stalks the countryside—who dares confront it? 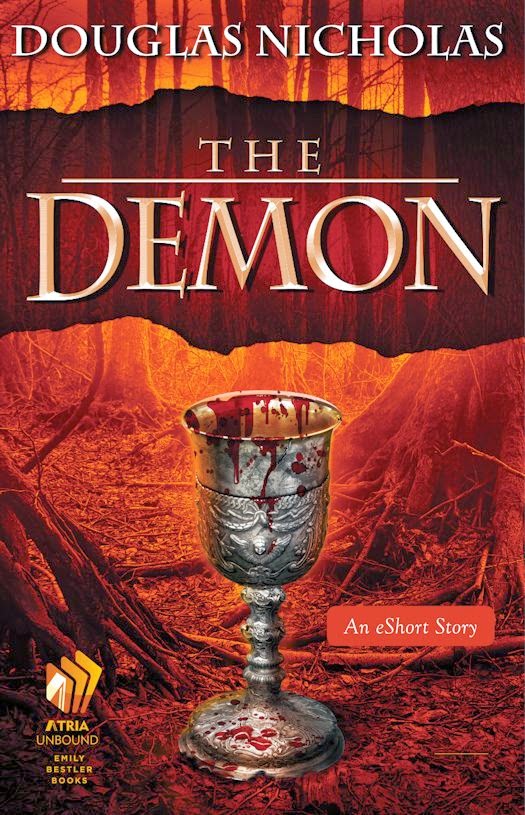 Mixing history, fantasy, and legend, The Demon is an exclusive e-short story from acclaimed novelist Douglas Nicholas, perfect for fans of Game of Thrones.

In England’s wild North Country, the men of Blanchefontaine, led by the castellan Sir Balthasar, must hunt an unearthly creature that stalks the nearby woods. But all is not as it seems…

Note that The Demon is free! 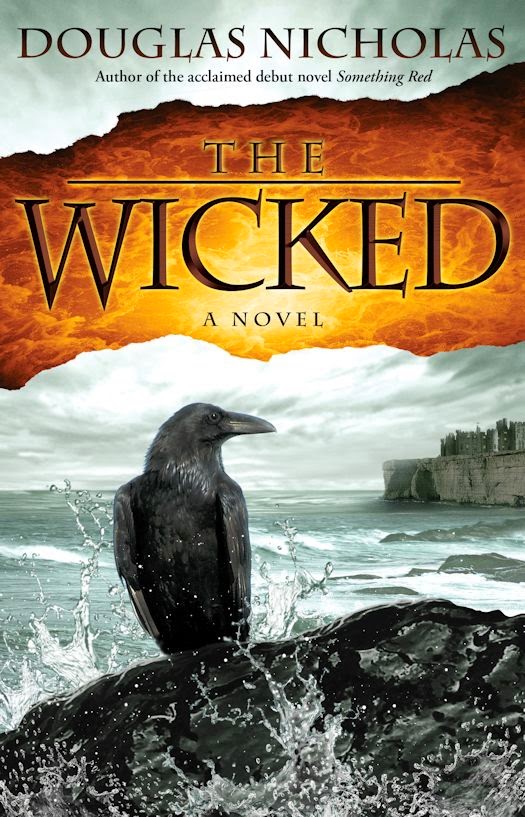 The mesmerizing and highly anticipated sequel to Something Red transports readers to the harsh and enchanting world of thirteenth-century England, where a group of unlikely heroes battles an ancient evil.

A thrilling and intoxicating journey to a land of legend, where nothing is quite as it seems. . . .

Something evil has come to reside in a castle by the chill waters of the North Sea: men disappear and are found as horribly wizened corpses, knights ride out and return under an enchantment that dulls their minds. Both the townspeople and the court under Sir Odinell’s protection live in fear, terrorized by forces beyond human understanding. But rumors of a wise woman blessed with mysterious powers also swirl about the land. The call goes forth, and so it comes to be that young apprentice Hob and his adopted family—exiled Irish queen Molly, her granddaughter Nemain, and warrior Jack Brown—are pitted against a malevolent nobleman and his beautiful, wicked wife.

Richly set in the inns, courts, and countryside of thirteenth-century northwest England, The Wicked is a darkly spun masterpiece that will leave fans of epic fantasy thirsty for more. 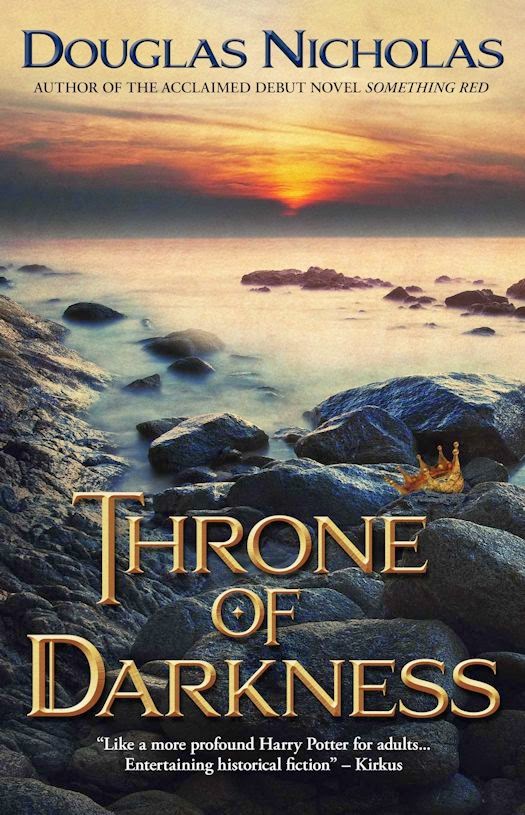 Perfect for fans of Game of Thrones, this novel from acclaimed author Douglas Nicholas continues the gripping dark fantasy series that Kirkus Reviews describes as “a more profound Harry Potter for adults.”

It’s 1215 in northwest England—the eve of the signing of the Magna Carta—and mystical Irish queen Maeve and her unlikely band of warriors must protect the region from a chilling fate. Word of a threat reaches the Northern barons: King John has plotted to import an African sorcerer and his sinister clan of blacksmiths, whose unearthly powers may spell destruction for the entire kingdom. Along with her lover, Jack, her gifted niece, Nemain, and Nemain’s newlywed husband, Hob (whose hidden talents will soon be revealed), Maeve must overcome a supernatural threat unlike any she’s seen before.

With his characteristic blend of historical adventure and intoxicating mythological elements, Nicholas once again “goes for the throat…with brilliant writing and whip-smart plotting” (New York Times bestselling author Jonathan Maberry). This is a richly woven tale that will leave you hungry for more.

In Throne of Darkness Douglas Nicholas returns to the world of Molly, Nemain, Jack and Hob that he introduced us to in Something Red and continued in The Wicked. In Throne of Darkness King John I of England (of Magna Carta fame) is building a sinister army to defeat the Barons. Molly (Queen Maeve) is approached to counter King John's plans. She's not really asked this time but is coerced into her greatest challenge yet.

Molly and Nemain are Queens of clans from Ireland. Molly is in England building allies and biding her time until she can return to Ireland and she and Nemain can reclaim their thrones. And build allies she does. Throughout the 3 novels, Molly's and her group's adventures have been genuinely riveting and entertaining.

Molly is the leader. She is easy to love and admire. She's regal, intelligent, kind and a formidable practitioner of the (supernatural) Arts. She is also not someone to trifle with. Nemain is her granddaughter. I've watched Nemain grow up during the series. She is fierce, a skilled fighter and also a practitioner of the Arts she learned from Molly. Jack Brown is a former mercenary with a secret. He came to Molly for help and has never left. He is a huge man, skilled at war, but is also a gentle and kind soul. You do not, however, want to be on the wrong end of his battle axe. And Hob, now Nemain’s husband - I've also watched him grow up throughout the novels. In some ways Throne of Darkness is more his story. I finally understood Hob's potential and future in Throne of Darkness. He's become a brilliant fighter throughout the series. Hob is in for some big changes, some of which left me quite emotional.

Douglas Nicholas' writing is lyrical and elegant. He places you deeply into the era he is writing about. You can see the sunlight flickering through the trees and the dust lift off the road as the wagons go by. You can feel the joys and sorrows of the people. You can practically taste the food.

Nicholas imbues his Something Red series with the supernatural, which is really superbly done. He  is a master of placing his story and characters within the context of real events and making you believe in them, care about them and root for them.

Throne of Darkness is a wonderful novel, full of history, thrills, the supernatural, and deeply engaging characters. I absolutely love this series and highly recommend that you read each book in order.

Douglas Nicholas was an award-winning poet, whose work has appeared in numerous poetry journals, and the author of six previous books, including The Wicked Something Red and Iron Rose, a collection of poems inspired by New York City.He is survived by his wife, Theresa, and Yorkshire terrier, Tristan.