New Story Arc for Cannibal in May

NEW STORY ARC FOR ANTI-APOCALYPSE TALE CANNIBAL COMING THIS MAY
The second story arc kicks off with issue #5
PORTLAND, OR, 03/28/2017 — New York Times bestselling writer Brian Buccellato (SONS OF THE DEVIL, The Flash, Injustice), co-writer Jennifer Young, and artist Matías Bergara (Sons of Anarchy) will dive into a new story arc in their ongoing southern-fried horror series CANNIBAL this May.

In the small Everglades town of Willow, the cannibal pandemic has only just begun. Told through the eyes of the Hansen family, it’s an anti-apocalypse story about a community that’s just too damn stubborn to give in.

In CANNIBAL #5, folks come to grips with the reality of cannibals, and Jolene’s fate is revealed.


Select praise for CANNIBAL:
“Entertaining through and through.” —Comicosity
“CANNIBAL, both visually and textually, offers a unique twist to the human-eat-human
genre.” —Rogues Portal
“Offers backwoods terror more in line with the gritty depravity of Deliverance than the
B-movie schlock of The Hills Have Eyes.” —Paste Magazine
“CANNIBAL transcends the basic zombie story we all know and love, delving into the
more complex, emotional, and moral side of cannibalism—the human side, if you
will—through an ensemble cast of characters residing in the sleepy, Southern Gothic
setting of Willow, Florida (now a ghost town in real life).” —SlackJaw Punks
“This is southern brewed horror with a dose of heartbreak.” —Horror Talk 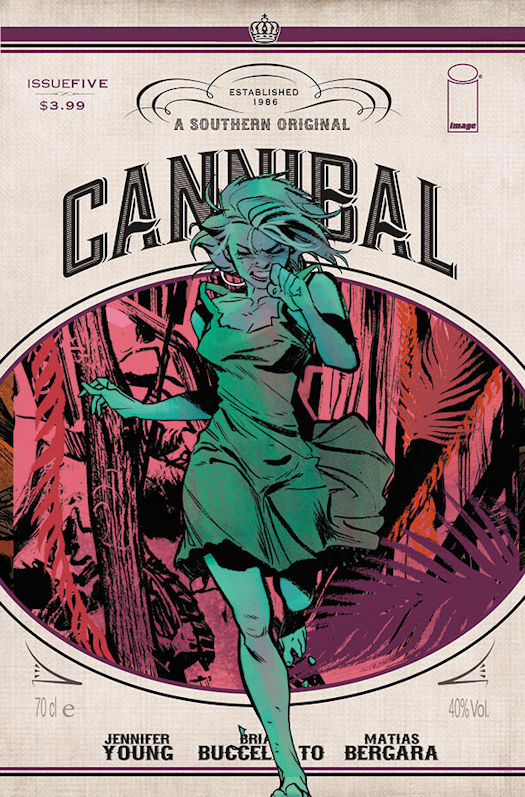 About Image Comics
Image Comics is a comic book and graphic novel publisher founded in 1992 by a collective of bestselling artists. Image has since gone on to become one of the largest comics publishers in the United States. Image currently has five partners: Robert Kirkman, Erik Larsen, Todd McFarlane, Marc Silvestri and Jim Valentino. It consists of five major houses: Todd McFarlane Productions, Top Cow Productions, Shadowline Comics, Skybound Entertainment, and Image Central. Image publishes comics and graphic novels in nearly every genre, sub-genre, and style imaginable. It offers science fiction, fantasy, romance, horror, crime fiction, historical fiction, humor and more by the finest artists and writers working in the medium today. For more information, visit www.imagecomics.com.
Posted by Qwill at 7:17 AM